Mickey Mouse has got to be pissed.

The trailer (posted above) for first-time director Randy Moore’s black-and-white horror flick Escape From Tomorrow was released online Wednesday. A hit at this year‘s Sundance Film Festival, the film has been riding a steady wave of publicity for the past nine months, not only for its noir-ish artistic merits, but also for the fact that it might be a heaving pile of illegality.

Escape From Tomorrow tells the story of a troubled family’s trip to a Disney theme park. Their day of fun unravels into maelstrom of “paranoid visions, bizarre encounters, and an obsessive pursuit of a pair of sexy teenage Parisians,” according to the film’s synopsis. There is also a scene in which the lead character is vomiting and defecating simultaneously at the theme park. The movie was shot on location at both Walt Disney World in Orlando, Florida, and Disneyland in Anaheim, California—without the permission of the Walt Disney Company. This is an example of “guerrilla filmmaking.” (Moore also reportedly edited it in South Korea to try to keep it a secret from Disney.)

Filmmakers are generally required to negotiate and secure legal access to filming locations, so it wouldn’t be an enormous shock if (the famously litigious) Disney were to take legal action against the movie, particularly with its October theatrical release around the corner. One prime example of Mickey Mouse getting his litigation on was the nearly decadelong 1970s court battle Walt Disney Productions v. Air Pirates, in which a group of countercultural cartoonists published two issues of the alt-comic Air Pirates Funnies. The issues showed beloved Disney characters indulging in sex, narcotics, and naughty language. The underground artists were sued by Disney for copyright and trademark infringement, among other things. The rebel cartoonists lost every case and appeal in the eight-year saga, which ended with a whimper: Disney decided not to try to have them thrown in jail and ended up dropping the lawsuit.

So of course a large part of the film’s publicity revolves around whether or not Disney will do anything to suppress it. “The following motion picture has not been approved for all audiences by the Walt Disney Company,” reads a title card at the start of the trailer. The “first trailer for Escape From Tomorrow will seriously make you wonder how Disney is not suing,” declares Indiewire. When asked in January if he was concerned about Disney’s potential response to his film, Moore said, “Yes.”

“Constantly in the back of my head there are legal things, like, ‘What could happen if I say this or that?'” Moore said.

There are a lot of things you could say about Disney. It’s an unsettling corporate and entertainment empire bearing the name of a far-right reactionary that manages rides that are possibly covered in dead people. But Disney executives aren’t stupid, and they’ve been keeping very, very quiet about the film since January—already knowing that waging a legal war on a small horror movie would likely generate exponentially more attention for the filmmakers and create a situation in which Disney looks like a multibillion-dollar bully. For instance, Disney declined to sic their armada of lawyers on the people behind Exit Through the Gift Shop, a 2010 documentary that also included some rogue filming at Disneyland. Neither Disney nor Moore have responded to Mother Jones‘ requests for comment, and Producers Distribution Agency—which is distributing the film—did not confirm whether or not Disney has pursued any recent legal action.

Now, to drive home the point of merging Disney theme parks with surreal psychological and physical horror, here’s the poster for Escape From Tomorrow: 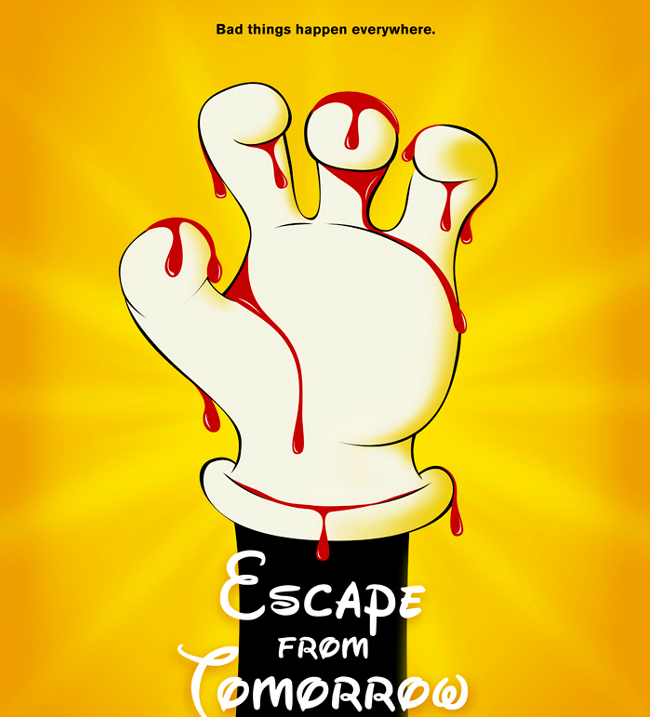 And here’s a clip from the film: