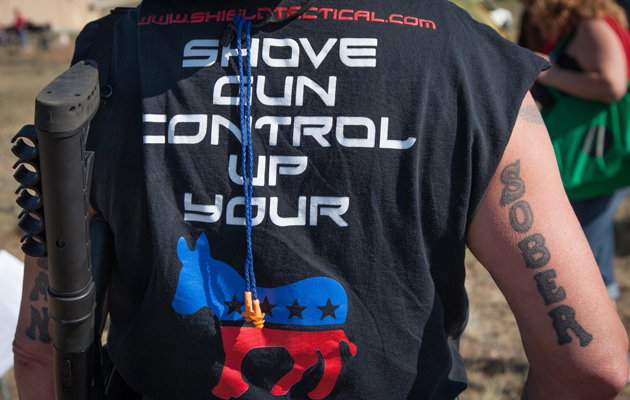 On Tuesday, voters in two Colorado counties will determine the fates of a pair Democratic state senators who helped push through a slate of gun control legislation last spring. Senate Majority Leader John Morse and Sen. Angela Giron were targeted for recall votes by gun rights activists after supporting legislation that capped magazine capacity at 15 rounds and mandated background checks for all private gun sales. But what started as a genuine grassroots effort born out of anger over the gun vote has grown into something much bigger—a national proxy war on not just gun control but also reproductive rights. (The two Republican challengers who would take office if the recall succeeds have both taken heat for their support of the so-called “personhood” movement, which classifies zygotes as people.)

Not just gun control but reproductive rights are at issue in the Colorado Senate recall.

The results: a flood of outside money. Opponents of the recall have poured more than $2 million into the race so far, almost all of it from out of state. Leading the way is Taxpayers for Responsible Democracy, a pop-up organization that brought in almost all of its money from three sources—California philanthropist Eli Broad ($250,000); the environmental outfit Conservation Colorado ($75,000); and New York City Mayor Michael Bloomberg, who chairs a group called Mayors Against Illegal Guns and gave $350,000. (In the wake of last year’s school shooting in Newtown, Connecticut, Bloomberg pledged to spend $12 million in support of pro-gun control candidates.) Another outfit, We Can Do Better, Colorado, serves as a local front for the DC-based Democratic Legislative Campaign Committee, which has poured $300,000 into the race.

Support for the recall has come mostly from one source—the Virginia-based National Rifle Association. The National Rifle Association Committee to Restore Coloradans’ Rights, as the NRA’s recall group is called, had spent $362,000 as of September 3, with more expected over the last week. But in the last month, a new organization called Free Colorado made waves when it released this ad targeting Morse by falsely alleging that he had called gun ownership a “sickness.” (Morse, channeling RFK, had referred to gun violence as a sickness, which is probably a natural human reaction for someone who has lived through both Columbine and Aurora.)

Free Colorado is not required by the state to disclose how much it has spent on the recall or where that money came from.

There’s no way to know how this stacks up to previous recall efforts in Colorado because there haven’t been any. But by way of comparison, in 2010, when Morse was last up for reelection, he spent $112,770 in a race he only narrowly won. That same year, Giron spent just $71,136. Bloomberg, Broad, the NRA, and the DLCC have each contributed more than the combined sum. Abortion rights groups Planned Parenthood and NARAL are both running get-out-the-vote operations, as is Americans for Prosperity, the conservative dark-money outfit backed by the Koch brothers. (As the Sunlight Foundation explains, it’s difficult to find out how much money outside groups are spending on specific ad spots, because the Colorado Springs and Pueblo media markets are too small to fall under the Federal Communication Commission’s reporting requirements and such information is therefore not posted online.)

But Democrats have more than just money on their side this time. For one thing, while a majority of Coloradans dislike the gun control law, a roughly equal number oppose the recall. And the returns so far are promising: In Giron’s district, supporters have built up a 3-1 advantage in early voting. The idea that bucking the NRA meant an almost-certain political death has always been a myth. With all eyes on Colorado, people might just finally take notice.