It’s been a tough few years for people working in higher ed: As the recession hit, pay for faculty stagnated, and schools have been struggling with budget cuts and the rising cost of providing education. There’s one notable exception to this trend: Pay (and perks) for college presidents is on the rise. There are a lot of possibilities as to why this is happening, and none of them make the world of higher education look very good.

Read a list of the 10 most ridiculous perks given to college presidents and celebrity profs.

In the past, universities have made the case that incentives—often in the form of exit bonuses, deferred compensation, and loan forgiveness—are necessary to attract top talent, particularly highly skilled, and oftentimes high-profile, administrators. Yet some incentives simply cross the line, says Claire Potter, a professor at the New School who writes frequently about salaries for college administrators. Providing faculty with mortgages for homes is a common practice, she explains, but a few colleges have taken to forgiving those mortgages, essentially turning a loan into a cash payment. “There are two kinds of mortgages in play,” Potter says. “One is the type that the university cosigns for you to get faculty in. The other is to give them a mortgage that essentially puts money in people’s pockets.”

Potter thinks the need to attract top talent is understandable, but within bounds. “As soon as you are getting extreme compensation at the expense of others, that’s when it becomes a problem.” Depending on the type of institution, between 2011 and 2012 a university president made about three times as much as a typical full-time professor at public schools. At private institutions, a president made about four times as much as a typical professor. 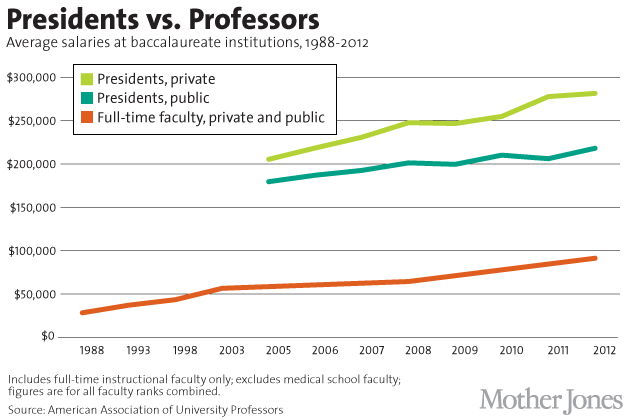 Part-time and adjunct professors, who make up a growing share of faculty, earn just a fraction of what executives make, at about $2,700 per course. A part-time professor with a master’s degree teaching eight courses makes about $19,200 annually, according to a recent survey by the Coalition on the Academic Workforce. “Universities have so radically increased their use of part-time employees to do teaching and other services,” says Cary Nelson, a former president of the American Association of University Professors who teaches at the University of Illinois at Urbana-Champaign. “Many of those people are simply no longer earning a living wage.” 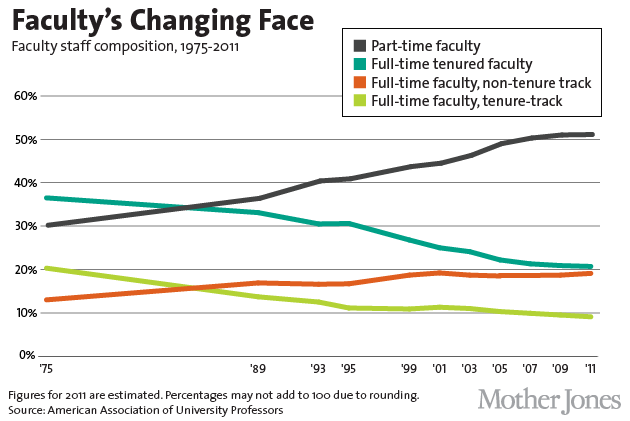 Meanwhile, financial perks for executives are becoming more common and more extravagant. Nelson and Potter see a variety of factors contributing to this: For one, executive pay across many industries has risen sharply in recent years, and universities are run more like businesses than they were in the past. An underlying cause may be the composition of college boards of trustees, which are increasingly made up of high-powered individuals from the corporate world as opposed to a broader mix of alumni. In 2010, trustees with “business occupations”—including executives and administrators of a large corporation; a banking, financial, insurance, or real estate company; or a small business—made up about 42 percent of trustees at public university and 53 percent of those at private institutions, according to the Association of Governing Boards of Universities and Colleges.

“Often the trustees of universities are themselves CEOs,” wrote the authors of a 2006 study in the Journal of Higher Education that looked at the potential influence of university trustees who also serve on corporate boards. “The salaries of CEOs have risen dramatically in the past decade. Where the networks of corporate directors and trustees are dense and overlapping, as CEO compensation in the corporate sector increases, a similar logic may well be applied to CEO compensation in private universities.”

In 1994, the study’s authors write, two private research university presidents made more than $500,000 (more than $788,000 in current dollars). By 2003, there were 42. While public institutions lag behind private ones—in 2004, 17 presidents of public research institutions were members of the “$500,000 Club”—they are likely to adopt similar practices over time. “The market for presidents spans private and public sectors, and so long as supplemental private resources are available, allows the publics to use private sector practices to leverage their boards for similar compensation packages.”

As executive compensation packages become more lavish at some universities, it sets new standards for what’s acceptable across the field, Nelson says. “You end up with a labor force in higher education that’s very comparable to that of a corporation that is simply seeking to extract labor at the lowest possible cost. Is that the ethical model that higher education should emulate?”