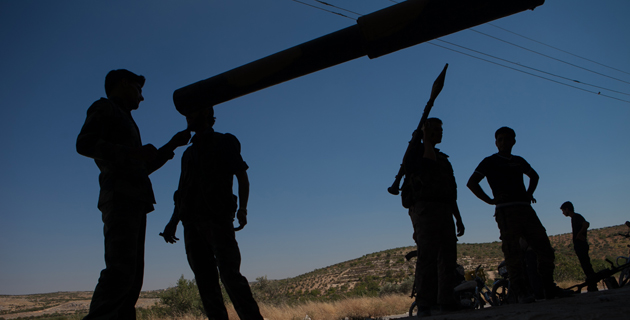 On Saturday, President Barack Obama announced that he would ask Congress for an authorization to use military force in Syria in response to a chemical weapons attack in Damascus that killed more than 1,400 civilians. Speaker of the House John Boehner (R–Ohio) quickly scheduled a vote for the week of September 9th, after Washington returns from August recess. But will the measure pass? Here’s a quick guide to emerging factions on Capitol Hill.

The Republican Anti-Interventionists: Led in the House by Congress’ only member of Syrian ancestry, Michigan Rep. Justin Amash, and a growing cohort of allies like North Carolina Rep. Walt Jones and Kentucky Rep. Thomas Massie, who previously sought to block military aid to Syrian rebels. (Amash’s response to Obama’s announcement Saturday: “Thank you, Mr. President.”) They’re likely to argue that any military action without authorization from Congress is unconstitutional—and any military action with authorization would simply waste American resources. On the Senate side, Texas Sen. Ted Cruz and Kentucky Sen. Rand Paul announced their opposition last week. Paul fretted that a “piddly attack with a few cruise missiles” would only worsen the conflict and possibly threaten the security of Israel. They are joined by Utah Sen. Mike Lee, who says “there is still no compelling national security impetus for American military involvement in a civil war in the Middle East.”

The Democratic Doves: Best represented (unsurprisingly) by Florida Rep. Alan Grayson. He’s skeptical of US intel on the Syrian government’s use of chemical weapons—and even if he were convinced, he still wouldn’t support American military intervention. “There is nobody in my district who is so concerned about the well-being of people in Syria that they would prefer to see us spend billions of dollars on a missile attack against Syria than to spend exactly the same amount of money on schools or roads or health care,” he told Slate. “Nobody wants this except the military-industrial complex,” he also said. Also, on Saturday, right after President Obama wrapped his speech calling for a vote in Congress, Rep. Charles Rangel (D-N.Y.) went on CNN to say there is still no reason to place Americans “in harm’s way” over the Syria conflict. (Rangel expressed similar concerns in this June USA Today op-ed.)

The GOP Maybe-if-You-Ask-Nicely-Caucus: New Hampshire Sen. Kelly Ayotte endorsed military strikes in Syria on the condition that Obama first seek the support of Congress. Florida Rep. Ileana Ros-Lehtinen told constituents that “we cannot simply allow Assad to continue this unthinkable brutality against his own people,” but insisted that congressional approval is a necessary step. Texas Sen. John Cornyn, the number-two Republican in the upper chamber, expressed skepticism at the idea of intervention but would not rule it out entirely—provided he had a chance to vote on it. Virginia Rep. Scott Rigell and several dozen colleagues wrote a letter to the White House last week demanding a Congressional referendum without making any promises on how he would vote.

The Democratic Wait-And-See Caucus: Sen. Carl Levin (D-Mich.) urged prudence and patience on Friday: “I again expressed my view that the United States should not undertake a kinetic strike before the UN inspectors complete their work, and that the impact of such a strike would be weakened if it does not have the participation and support of a large number of nations, including Arab nations,” Levin said in a statement. (He did, however, express continued support for arming “vetted elements” of the rebel forces.) Sen. Elizabeth Warren (D-Mass.), similarly, wants the administration to make a stronger, more thorough case. “I am deeply concerned that our aid might have unintended consequences,” she said in June (since then, she has remained mostly silent on the matter). “We need clear goals and a plan to achieve them or else the United States could get bogged down in another war in the Middle East.”

This week, more than 50 House Democrats signed a letter—written by California Rep. Barbara Lee—calling for a congressional resolution on strikes, cautioning that the dire situation in Syria “should not draw us into an unwise war—especially without adhering to our constitutional requirements.”

The Marco Rubio We-Waited-Too-Long Caucus: Typified by Sen. Marco Rubio (R-Fla.), who released a statement on Wednesday blasting any hypothetical strike as little more than a counter-productive face-saving measure. “Because the President failed to act in the right way at the right time, we are now left with no good options,” he wrote. Instead, Rubio suggested the United States either launch a “comprehensive plan using all of the tools at our disposal” or focus instead on “helping our allies in the region protect themselves.” This group has some overlap with…

The Republican Hawks: You learned their names over the last decade and while their power has dimmed, they haven’t gone away. Arizona Sen. John McCain and South Carolina Sen. Lindsey Graham released a joint statement after the chemical attacks calling for a large enough military involvement to affect the outcome of Syria’s civil war. Although he dismissed proposed air strikes as “cosmetic,” McCain has also called the US’s lack of intervention “shameful” and lobbied for military intervention as the United States’ best option. The House faction includes Michigan Rep. Mike Rogers, chairman of the House Permanent Select Committee on Intelligence. Rogers has lobbied for congressional involvement but stopped short of saying that an up/down vote was necessary. Tennessee Sen. Bob Corker endorsed a “surgical, proportional strike,” so long as it didn’t cause long-term on-the-ground involvement. New York Rep. Peter King blasted the decision to even ask for a vote, charging that “President Obama is abdicating his responsibility as commander-in-chief and undermining the authority of future presidents.”

The Democratic Hawks: “If we are to salvage what remains of our credibility in the region, we must act soon,” Rep. Eliot Engel (D-NY), the top Democrat on the House Foreign Affairs Committee, told Foreign Policy after news of the chemical weapons attack broke last week. Connecticut Sen. Chris Murphy—who had previously allied with Republican Sen. Rand Paul for a failed amendment to bar the US from shipping weapons to Syrian rebels—also conceded that chemical warfare is a game-changer: “If it looks like this is the beginning of a long term chemical weapons campaign from Assad, even I would reevaluate whether the United States needs to step in,” Murphy said.

Other Democratic senators—such as New York’s Chuck Schumer and Kirsten Gillibrand—have voiced public support for limited airstrikes. Sen. Bob Casey (D-Pa.) has been advocating possible cruise missile strikes on the Syrian air force since May. But the hawkish stance on the Democratic side is perhaps best represented by House Minority Leader Nancy Pelosi, who on Thursday urged senior administration officials to take military action against the Assad regime.