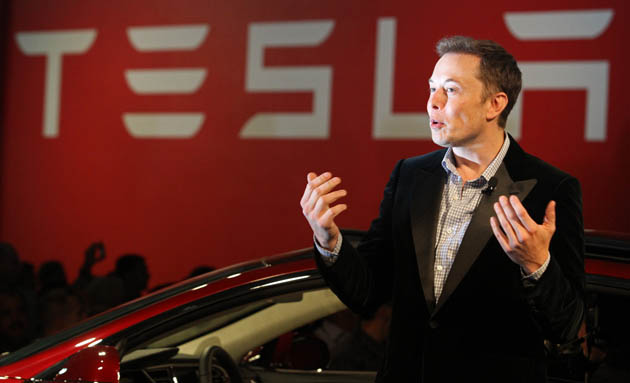 Editor’s note: This story has been updated to reflect Tesla’s Q2 results.

Tesla Motors surprised Wall Street this afternoon, announcing second-quarter profits of $26 million on $405 million in revenue. Since it reported its first modest profit in May, the electric-car company cofounded by billionaire entrepreneur Elon Musk already had seen its share price more than double, and you can expect it to soar even higher when the markets open tomorrow. Many analysts, after all, were expecting Tesla to take a hit. But so far, the company’s profits have relied on government subsidies and initiatives.

Tesla’s own accomplishments are impressive. The company, founded in 2004, is selling its all-electric cars as fast as it can produce them, even though the baseline price for a Model S sedan is nearly $70,000. Car and Driver says the Model S is possibly the best car it has ever tested. Musk has built a successful company after years of scraping by low on funds while sinking money into researching and developing amazing cars.

In January 2010, as Tesla was developing the Model S, it received a $465 million dollar loan from the Department of Energy (DOE). That’s not to mention other, less direct subsidies, like the millions of dollars in subsidies in Japan that helped Panasonic develop the lithium-ion batteries that are at the heart of every Tesla car. Tesla’s modest first-quarter profit relied on $68 million from zero-emission-vehicle (ZEV) credits it sold to other, less environmentally friendly car companies under a California emissions mandate. There’s also the $7,500 federal tax break for people who buy electric vehicles, which makes its pricey cars more affordable.

As for today’s results. Tesla earned $51 million on ZEV credits, without which it would not have been able to report a profit.

Tesla is a model for how government support can help bring ambitious new technologies to market. But you won’t hear Elon Musk saying that. To the contrary, he has tweeted about how he thinks we’d be better off passing a carbon tax instead of the hefty loan that floated Tesla at a key moment. Musk claims the DOE loan was merely an “accelerant” for Tesla. The company was “bailed in, not bailed out,” Musk quipped during an interview with Popular Mechanics last year.

Could Tesla have made it this far without government support? And will the company—not to mention Musk’s other enterprises, SpaceX and SolarCity—stand alone in the future? Let’s take a look at Tesla’s climb to success.

1. Starting in 2004, Tesla drums up millions in private cash so it can build an electric car from scratch. Musk leads several private financing rounds, and dumps in a substantial chunk of his own cash.

2. By 2008, Tesla has spent years designing its first car, the Roadster, but still has nothing to sell to customers. The car is taking years longer to bring to market, and costing a lot more, than Tesla execs had predicted. Tesla slashes its workforce. Musk takes over as CEO and eventually pushes hard for the federal loan, which Tesla receives in January 2010.

3. The loan helps Tesla get the Model S to market. The car gets (mostly) rave reviews, setting the stage for a successful IPO in June 2010, when Tesla raises $226 million selling stock to the public.

4. The IPO and brisk sales of the Model S (made more affordable by that $7,500 federal tax credit) allow Tesla to pay off its loan years early. In May 2013, thanks to $68 million in revenues from selling California clean-air credits to rival car makers, Tesla posts its first profit, a modest $11 million.