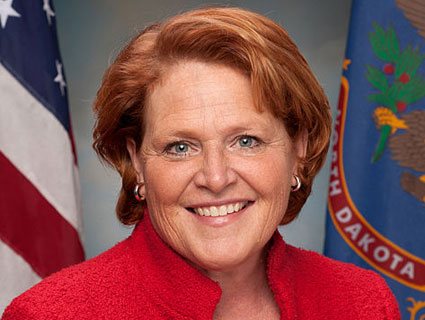 Sen. Heidi Heitkamp (D-N.D.) flew back from North Dakota to cast the deciding vote to break a filibuster of Todd Jones' nomination to run the Bureau of Alcohol, Tobacco, Firearms and Explosives.<a href="http://en.wikipedia.org/wiki/File:Heidi_Heitkamp_official_portrait_113th_Congress.jpg">United States Senate</a>/Wikimedia Commons

On Wednesday, the Senate confirmed Todd Jones to head the Bureau of Alcohol, Tobacco, Firearms and Explosives (ATF), the agency tasked with enforcing federal gun laws. Jones, an attorney and former Marine, has served as the acting head of the agency since 2011. He becomes its first permanent director since 2006, the year that the National Rifle Association successfully lobbied Congress to require that ATF directors be confirmed by the Senate.

When President Obama nominated Jones to head the ATF in January, politicos expected a gun-lobby showdown. But although the NRA has opposed all ATF nominations since the 2006 rule change and for decades has prevented the agency from fully enforcing gun laws, it unexpectedly announced on Tuesday that it would not take a position on Todd’s confirmation vote. The Newtown, Connecticut-based National Shooting Sports Foundation, a trade association that represents gun manufacturers, announced its support for Jones the same day.

New York Mayor Michael Bloomberg, the co-chair of Mayors Against Illegal Guns, hailed the vote as a “critical step in the fight to reduce gun crime.” Boston Mayor Tom Menino, the group’s other co-chair, said, “After seven years without a permanent director at the helm, ATF will finally have the strong leadership it needs to stem the flow of illegal guns onto our streets and help keep our communities safe.”

With the vote stalled at 59-40 through Wednesday afternoon, senators waited for Sen. Heidi Heitkamp (D-N.D.) to arrive at the Capitol en route from her home state to cast the deciding vote needed to overcome a filibuster. Heitkamp, whose return to Washington was delayed because of an illness, was one of only four Democrats to vote against the Senate’s failed gun reform legislation in April. All four voted to break the filibuster against Jones, as did six Republicans: Sens. Kelly Ayotte (N.H.), Susan Collins (Maine), Lindsey Graham (S.C.), Mark Kirk (Ill.), John McCain (Ariz.), and Lisa Murkowski (Alaska).

I emailed Sarah Binder, a political science professor at George Washington University, to ask how common it is for senators to fly into Washington to cast a deciding vote:

It’s not very common (at all), but neither is it unprecedented. The example that comes to mind is a (roughly) similar situation when the 2009 stimulus vote was held open to give Sherrod Brown time to get back to Washington amidst funeral services for his mother in Ohio.

But other than that recent example, nothing else expressly similar comes to mind. There are older stories of the House GOP leadership holding open the vote on Medicare expansion in 2003 for several hours, and a House Dem open vote some years earlier (involving Rep. Jim Chapman and Speaker Wright). Both of those episodes entailed holding open a vote for the winning side to squeak by (if I’m recalling correctly!).