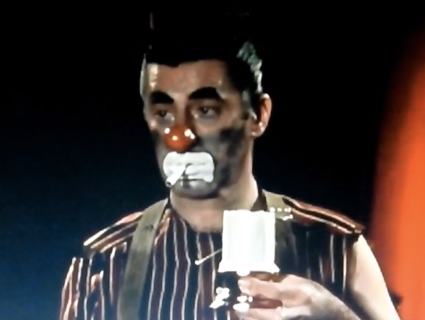 In 1972, comedian and filmmaker Jerry Lewis made The Day the Clown Cried, an infamous and supremely embarrassing pop-culture fixation that Lewis has kept hidden in a vault for the last four decades. The dramatic film stars Lewis as Helmut Doork, an unemployed circus clown who ends up entertaining children before shepherding them into a Nazi gas chamber.

Only a handful of people in the world have seen this colossal cinematic train wreck. “[S]eeing this film was really awe-inspiring, in that you are rarely in the presence of a perfect object,” actor and humorist Harry Shearer famously told Spy magazine in 1992. “This was a perfect object. This movie is so drastically wrong, its pathos and its comedy are so wildly misplaced, that you could not, in your fantasy of what it might be like, improve on what it really is. ‘Oh, My God!’—that’s all you can say.”

Well, over the weekend, additional behind-scenes-footage of the Nazi death camp clown movie leaked online. (Other footage had leaked years ago.) And if you thought this story couldn’t get any weirder, guess who was backing an aborted remake of the film in the early ’90s? Jack Abramoff, the former Republican mega-lobbyist and convicted felon whose name became synonymous with bribery, Washington corruption, and ripping off American Indian tribes.

“What drew me to the project was the power of the story and the humanity of the narrative,” Abramoff tells Mother Jones. “I did not know, at first, about the Lewis involvement. I was shown the script and fell in love with it.”

As writer and film obsessive Lawrence Levi noted in 2006, one of the letters sent in support of Abramoff to US District Judge Paul Huck in Miami (the judge who sentenced Abramoff to nearly six years in prison for fraud) includes a paragraph regarding Abramoff’s involvement in the failed film project. Here’s the relevant section, via Harper’s:

Jack made every effort possible to secure funding for a film entitled The Day the Clown Cried, a movie about the importance of taking care of children, set in a WWII concentration camp.

The letter was written by Michael Barclay, president of the now-defunct indie film company Rainbow Ridge Films. It also praises Abramoff as “a human being of ethics and principle” and his “attempt to make a film about the need for hope and faith in times of horror.”

Abramoff says that, while Barclay may have been exaggerating his role, he did in fact try to get the death camp/circus clown film off the ground. (The remake went through several proposed incarnations, including a version shot in the Soviet Union as a joint production with Russian studio Lenfilm, and another calling for Robin Williams as Helmut Doork.) “I spent very little time with that project,” Abramoff says. “It really didn’t go anywhere. I wish it had! I remember reading the script, and it was a great project. But the rights weren’t clear. I know Jerry Lewis claimed ownership…and nobody could get clearance. So even though it was a great project, it just could never get made.”

The Day the Clown Cried, Redux was not Abramoff’s only foray into Hollywood. He cowrote and produced the 1989 Dolph Lundgren action flick Red Scorpion—a loud, anti-communist movie that undermined the international boycott of apartheid South Africa. And when George Clooney won the Golden Globe for best supporting actor in 2006 (right around the time of Abramoff’s guilty plea), he was sure to thank a certain lobbyist. “I want to thank…Jack Abramoff—you know, just because,” Clooney said on stage. “Who would name their kid ‘Jack’ with the last [word] ‘off’ at the end of your last name? No wonder that guy’s screwed up.” The joke made Mel Brooks laugh but, according to Abramoff’s father, made the former lobbyist’s then 12-year-old daughter cry.

Watch the newly leaked behind-the-scenes footage of The Day the Clown Cried here: