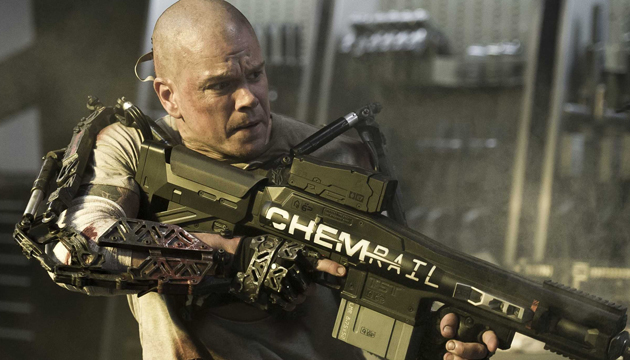 “It’s not just hypocritical to say this movie isn’t political, it’s hilarious,” Dan Gainor of the conservative Media Research Center told Fox News in response. “This is just the latest of several Hollywood movies this year to try and co-opt Occupy Wall Street plotlines into their films.” Other right-leaning observers have voiced similar sentiments. Big Hollywood, Breitbart.com’s pop-culture wing, has been rooting for the film to fail. Newsmax has dubbed the film, “Matt Damon’s Sci-Fi Socialism” and “heavy-handed political propaganda.”

Some of the conservative hate directed at Elysium‘s political content, real and imagined, is (as you can guess) a bit much. However, it’s odd that Blomkamp would claim his film does not have a “message.” His sci-fi action flick is explicitly and pervasively political. It gets its two cents in on global poverty, immigration, access to health care, and social mobility, all the while affording Matt Damon plenty of room to maim and explode bad guys.

The movie takes places in the year 2154, a future in which all of Earth’s civilizations look as broken as Somalia. The planet has been wrecked by pollution, disease, and overpopulation, and the wealthiest and most politically powerful of humankind have retreated to Elysium, a decadent space station where every rich person owns a tanning bed that can cure practically all illness and repair every organ and body part. The Earth’s poor aren’t allowed access to these medically magical tanning beds, and suffer and die in large numbers. (Attempts to illegally fly to Elysium are typically met with plutocratic missile fire.)

Damon (in a role once meant for rapper Eminem) plays Max DeCosta, one of the future’s great unwashed. DeCosta—carrying gigantic weapons and wearing a high-tech, steel exoskeleton—becomes the accidental hero in a righteously violent, pro-universal health care revolution that alters the course of human history. One obstacle to a glorious proletarian victory is Agent Kruger (Sharlto Copley, star of District 9 and Spike Lee’s upcoming Oldboy remake), a rogue government operative who commits human rights abuses and rape like it’s his day job. Another obstacle is Delacourt (Jodie Foster), Elysium’s murderous secretary of defense who commands an army of peasant-killing robots. So Delacourt is almost as terrible of a defense secretary as Robert McNamara was. (According to Blomkamp, the character’s personality and look were inspired by French politician Christine Lagarde, managing director of the International Monetary Fund.)

So, yeah, there are (very) political themes and—if you will—messages in this movie. It’s dishonest to say otherwise, particularly because these themes are what power the film. Elysium, like many movies before it, presents a perspective—but that doesn’t mean the filmmakers have an agenda. There’s nothing wrong with suggesting a fairly uncontroversial view (poor people deserve things, too) in your gory summer action film.

But Elysium is far from perfect. Some of the strained dialogue sounds like it was written in a freshman seminar. The frequently superb Foster is miscast and laughably unconvincing as a ruthless oppressor. And the action and commentary don’t approach the kinetic body slam or cleverness of Blomkamp’s previous effort. But as far as health care movies with guns go, this has just enough humanity to keep you engaged, and enough tense sci-fi bloodletting to meet popular demand. At the very least, it’s an improvement on John Q, the 2002 drama in which Denzel Washington takes hostages at a hospital in order to save his son’s life and make a compelling case for Hillarycare.

Now check out the trailer for Neill Blomkamp’s Multiplex-Delivered Propaganda For Universal Health Coverage. I mean, Elysium. I meant Elysium.

Elysium gets a wide release on Friday, August 9. The film is rated R for Matt Damon. Click here for local showtimes and tickets.