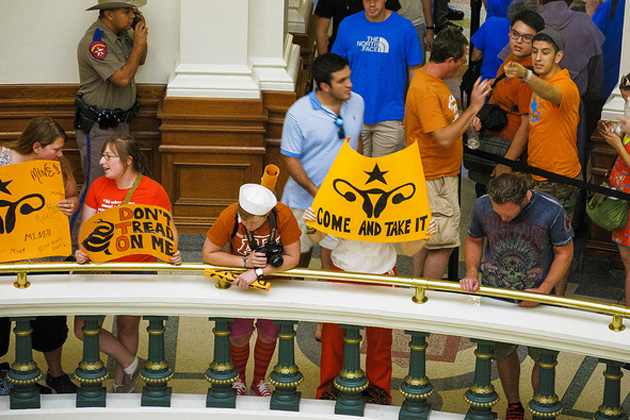 Protestors at the Texas capitol this past Friday, before the HB 2 vote<a href="http://www.flickr.com/photos/mirsasha/9278456244/">mirsasha</a>/Flickr

This weekend, the Texas Senate voted to pass HB 2, the abortion bill that state Sen. Wendy Davis filibustered two weeks ago. The law bans most abortions after 20 weeks, requires clinic doctors to have admitting privileges at a nearby hospital, and requires abortions to take place in ambulatory surgical centers. The law will likely close all but 5 of the state’s 42 clinics. Gov. Rick Perry has confirmed he’ll sign the bill into law, possibly as early as the middle of this week.

While Davis’ 11-hour stand focused national attention on this bill, Texas lawmakers have quietly slipped at least seven other bills onto the legislative agenda that would restrict women’s access to abortion. All of them have been proposed since the July 1 opening of the special legislative session called by Perry to force a vote on HB 2 after Davis and her supporters successfully stalled the first vote. These special sessions are unique in that a bill only requires a simple majority to pass rather than the two-thirds majority required during a regular session.

With that advantage in hand, the state’s Republican lawmakers have gone on an abortion restriction spree. Here are the bills they’ve proposed in the last two weeks:

SB 9: Sponsored by Sen. Dan Patrick, who also sponsored Texas’ sonogram bill, SB 9 would require that abortion-inducing drugs be dispensed only at abortion clinics. HB 2 already contains a provision requiring this, though it gives providers a little more leeway on dosage choices. Combined with HB 2’s other provisions, this rule means women could have to travel for hours to obtain mifepristone and misoprostol, the FDA-approved drug regimen used for early nonsurgical abortions. The law then requires them to return to the clinic for a follow-up appointment 14 days later.

HB 17: This bill would prohibit sex-selective abortions. Abortion rights advocates consider such bills, which have passed in several other states, tangential and unenforceable ploys to further restrict abortion rights.

HB 26: If passed, this bill would require women to fill out a “coerced abortion form” before the procedure, confirming they are acting voluntarily. The bill’s vague wording leaves room for a physician to deny an abortion if they believe she seems coerced—even if that’s not indicated on the form or said by her outright.

HB 18: Though Texas requires parental notification and consent for a minor to get an abortion, currently minors may bypass that requirement by way of a court petition. This proposed law would further complicate the red-tape-heavy process in a number of ways, including eliminating an existing rule that allows minors to move forward with the procedure if a judge does not rule within two days of a hearing.

HB 27: Taking HB 18 even further, this bill would extend the amount of time a court has to consider a minor’s initial request for an abortion (and subsequent appeals) from two to five days. It would also require minors to testify about their reasons for wanting an abortion, be evaluated by a state mental-health counselor, and prove their maturity with examples like “traveling independently” and “managing her own financial affairs.”

HB 50: This bill aims “to reduce the occurrence of abortions and the use of abortion facilities” by creating a public education program encouraging men to support women with unexpected pregnancies. That might not be a terrible idea, but the bill says that any state agency can work on the program (pregnancy info brought to you by the Texas Department of Transportation?!) and that they can’t contract with any health care providers, facilities, or advocacy groups to educate the public.

HB 22: If passed, this bill would prevent any affiliate of an abortion provider from providing information on sexuality or family planning for sex ed curricula. That means any information at all, whether it’s related to abortion or not. So Planned Parenthood, for example, which offers abortions (though they make up just 3 percent of their services, nationally) would be barred from providing any information—about women’s health, STDs, contraception, etc.—for use in Texas classrooms.

And across the aisle…

Democrats have proposed a few bills during this special session to counter the stream of anti-abortion legislation. SB 23 would prevent hospitals from denying admitting privileges to abortion-clinic doctors on the basis of where they work. Another measure, HB 45, mandates that all abortion laws passed in the Texas Legislature from now on can’t go into effect until 60 days after Texas abolishes the death penalty.