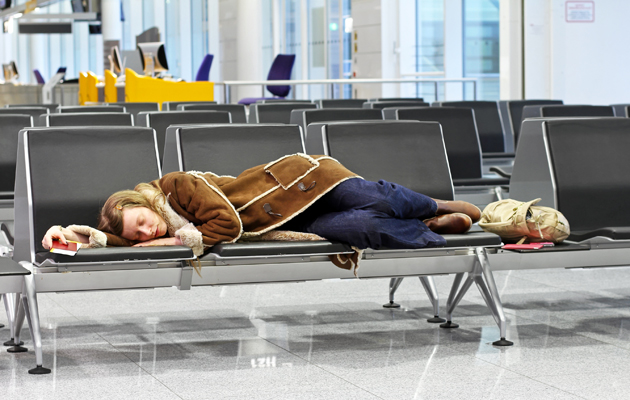 Someone (probably a journalist) sleeping at an airport (probably in Moscow) while waiting for a flight (to Cuba, probably). <a href="http://www.shutterstock.com/pic-89998417/stock-photo-passenger-spending-a-night-at-airport-after-flight-cancelation.html?src=0DJ6CANq5TKqz1gcW5M_FA-1-1">Baloncici</a>/Shutterstock

“Eighteen hours after their fools’ errand of a flight landed in Havana, much of the Moscow-based press corps is still stranded continents away from the Snowden story they were chasing: sightseeing in the region, sniffing around the José Martí airport and wondering who exactly set them up.” —Washington Post, June 25.

“Moscow’s main airport swarmed with journalists from around the globe Wednesday, but the man they were looking for, National Security Agency leaker Edward Snowden, was nowhere to be seen.” —Washington Post, June 26.

“Last week, journalists staked out a chain called Shokoladnitsa, hoping they would find Snowden drinking a $7 cappuccino or an $11 nonalcoholic mojito with $9 blini and red caviar.” —Washington Post, July 4.

Since late June, reporters from some of the world’s most prestigious news outlets have been holed up at Moscow’s Sheremetyevo International Airport, in the hopes of catching a glimpse of former National Security Agency contractor Edward Snowden, who is believed to be in diplomatic limbo in the airport transit zone. Or perhaps he’s in Hong Kong still. Or he’s on a plane. He’s definitely somewhere. Provided he’s not actually just a hologram. In the meantime, the journalists pursuing the story have become the story. So what exactly are those reporters doing in Moscow? Here’s an exclusive look:

7:00 a.m. Rise and shine! Remind yourself that you’re assigned to a major international news story involving diplomatic intrigue and espionage. You’re in a foreign country. Some people would give anything to have your job.

7:20 a.m. Steal soap from hotel bathroom in case you have to catch a flight out today on short notice.

7:40 a.m. Arrive at Terminal F. Confidently inform your editor that you believe Snowden is likely to show up at a coffee shop with working power outlets.

7:42 a.m. Chase the story! Camp out at a coffee shop with working power outlets.

8:30 a.m. Survey of friends on G-chat concludes that drinking in the morning is okay as long as you’re at an airport.

9:16 a.m. Reluctantly change “Alec Baldwin” Google alert from “once a week” to “as it happens.”

11:38 a.m. Bespectacled twenty-something white male is Dieter Hoefengarden, 27, a freelance ornithologist from Munich who’s here on holiday and wants to know why you chased him through terminal F. He tells you you’re the fourth reporter he’s talked to today.

11:42 a.m. Dieter agrees to keep in touch and wishes you good luck in your job search. You say something clever about birds but it gets lost in translation.

2:20 p.m. Discover that the Russian Burger Kings are, disappointingly, nothing like the commercial, and no one laughed at your “Voppers junior” joke. Also your translator has quit.

3:15 p.m. See if Anna Chapman has tweeted anything recently.

3:30 p.m. Discuss with colleagues at other outlets the legitimate possibility that Snowden might be on that next flight to Ibiza.

3:47 p.m. Have second thoughts about filing another story about the Sheremetyevo airport, but you’d rather not get scooped on the ladybug backpack at the Duty Free shop. You send it off to your editor.

4:01 p.m. Relocate to Shokoladnitsa, a popular cafe for stranded foreign correspondents, on the theory that Snowden will will leave his hiding spot to consume a $9 blini with red caviar, and $11 nonalcoholic mojito.