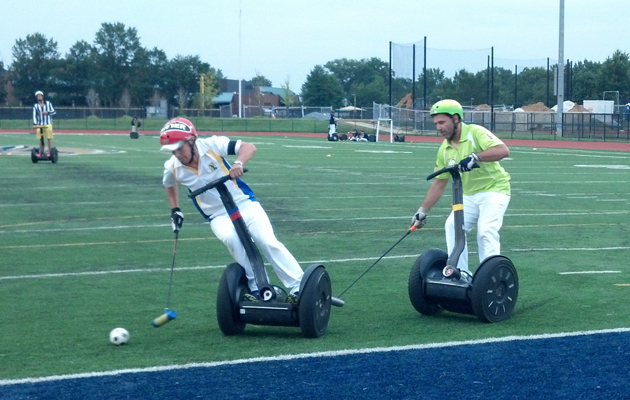 All things considered, the relocation of the Segway Polo World Cup from Lebanon to Washington, DC, ranks pretty low on Syrian President Bashar al-Assad’s list of crimes. “The polite way of saying it—the PC way of saying it—is the situation with the Syrians,” explains Kelly Davies, chief operating operator for Ijma3, the Arab technology firm that’s sponsoring the event, when I ask how the world’s most prestigious tournament for people playing polo on Segways ended up on a solitary patch of field turf at Gallaudet University, the nation’s leading institute of higher learning for the deaf.

“The issue is Syria.”

Segway polo works a lot like regular polo, except instead of riding horses, the players are on Segways, and instead of evoking glamorous images of a centuries-old aristocratic tradition, the players are on Segways. Billed as the invention that would change the course of mankind when it was unveiled in 2001, the Segway has instead fallen into more of a niche market, used primarily for tour groups and the tech-obsessed. It’s also been hampered by a string of bad publicity. President George W. Bush famously fell off of one, and three years ago, James Heselden, the company’s owner, died after he lost control of his scooter and fell off a cliff.

The Segway Polo World Cup features nine teams from five countries—Germany, Sweden, the United States, Lebanon, and Barbados. The winner receives a trophy called the Woz Cup, in honor of the sport’s creator, former Apple computer guru Steve Wozniak. Although notably absent, Wozniak, who is known simply as “The Woz,” is referenced in almost every conversation I have at the world cup, sometimes in the first sentence. Segway polo players tend to describe their attachment to the game in terms of degrees of separation from the Woz.

On the field, the action is spirited. “I’ll be honest, when I saw the Segway was invented I thought, ‘Wow, this will make lazy people lazier,'” admits Jennifer Sandserson, the event coordinator, on Monday evening. (Segways polo players typically work up a sweat over the course of the game, but to Sanderson’s point, upon the conclusion of a Sunday evening game, one of the American players did yell “Nap time!”) But Sanderson has been won over in the last few days. “Oh my God, the European players and the Lebanese and the Barbados players they take this so seriously as if it’s their whole career!”

As if to prove her point, Davies walks by around this time and begins raving about the intensity of the matches.* “You would think this is like UN peace talks! It’s like the [debate over sovereignty the] Palestinians!” (It isn’t, really.)

The thing that stands out about Jim Wilcox is probably that he looks like Santa Claus. Wilcox, who goes by “Willie,” is the captain, goalie, and co-founder of the Polo Bears, a hodgepodge of mostly Bay Area techies who have competed in every Woz Cup since 2008. “We’re here to have fun,” he says, when I ask him their level of competition. Then he lifts up his shirt sleeve to show me the tattoo on his bicep—a six-inch black silhouette of a Segway polo player, mallet extended. It contrasts nicely with the American flag bandana.

“They sometimes call us ‘the nerd herd,'” Wilcox says.

It’s not a bad description. The Polo Bears and their American rivals, the Aftershocks, come largely from the ranks of companies like Apple and Hewlett Packard. Some are involved in the Segway business themselves—or married to someone who is. A web entrepreneur named Ron Schnell co-founded the Polo Bears; he and his son comprise the team’s lonely South Florida satellite. The most interesting thing about Schnell, other than the fact that his personal website takes credit for both the formation of the band Phish and a new international theory of cell-phone etiquette, is that he was the inspiration for the 1983 Matthew Broderick film War Games, in which a young hacker accidentally sets off a nuclear crisis. (As a teen, he had a propensity for hacking and phone breaking.) In his free time, he writes a blog about French onion soup, which ranks every bowl he has ever tried (139 and counting). 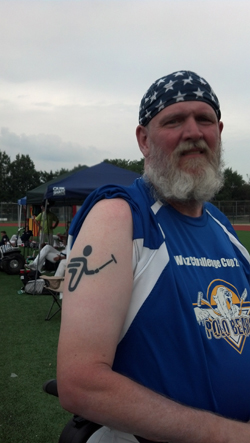 Like virtually everyone else I meet, Schnell was introduced to the sport by The Woz. (So was the sport’s other quasi-celebrity, Victor Miller, the 74-year-old author of Friday the 13th, who minds the net for the Silicon Valley Aftershock.)

Joined by Steve Ozdemir, a software engineer from California who met his wife on the competitive Segway polo circuit, the Polo Bears open up about their opponents, particularly Barbados, one of the strongest teams in the competition. They have their theories as to why. “There’s not a whole lot to do in Barbados, so they practice a lot more,” Wilcox posits. “Don’t write that, that’s off the record,” adds Schnell. “Apparently, practice works well with lots of rum there, but that’s just a rumor,” suggests Wilcox. “Off the record!” says Schnell.

The simple answer, though, is that the Barbadians are highly skilled pony polo players who participate in Segway polo as a side-project. Of all the teams assembled at Gallaudet, they come the closest to achieving real fluidity on the pitch—weighted balls over the tops of the defense, passes dropped into open space, deliberate movement off the ball. Players who come from equestrian backgrounds tend to be more comfortable playing balls through the air; veterans of field hockey or soccer prefer to keep the ball on the floor and hold possession.

The Americans, by contrast, tend to keep it loose. George Clark, a friend of The Woz and evidently one of the few Americans at the Woz Cup not named “Steve,” relays the story of the famed S’Team. It was short for “Steve’s Team,” and in honor of the Woz, who is obsessed with the mathematical concept of Pi, the team’s eight jersey numbers coincided with the first 16 digits. All the Steves wore jerseys with “Steve” on the back. All their wives wore jerseys that said “Steve’s Wife,” and they were referred to collectively by the public address announcer as “The Harem.” (“One disadvantage of having a deaf university is there’s not really a P.A. system,” Clark says.)

The game is growing slowly but steadily in the United States. Overseas, they’ve had more luck. “It’s very big in Sweden,” volunteers Sanderson. To prove her point, Sanderson introduces me to a twenty-something man with a blonde beard, thick glasses with brown frames, and a pair of hallucinogenic neon blue and orange kicks, who in turn introduces himself to me as “the craziest person from Sweden.” His name is Filip Hofmann and he plays left-forward for the Vikings, the club team founded by his boss at the Segway tour company in Stockholm. He is also a ballroom dancer.

I ask Filip how he came to the sport, and our conversation continues in more or less this same fashion. “There’s a Swedish expression that’s called ‘I slid in on a Shrimp sandwich!,’ if you translate it directly,” he says. “They somehow heard that I was good at ball sports, which is not really true, but they needed another player for the team so they asked me.”

The sport is big in Sweden. Not on the level of “build-it-yourself furniture” or cured meats, but at least it’s growing. Recently the country built the world’s first-ever arena solely for the purposes of Segway polo training. It has a capacity of 100 spectators, although to date they’ve yet to hold any formal events. There are even the beginnings of a serious rivalry between the Vikings and the crosstown Stockholm Saints. But it’s all in good fun.

“Segway players tend to be sportsmen,” Hofmann says with a grin. “It’s a gentleman’s sport.”

This is a recurring theme in my conversations, and to Hofmann’s point, Segway polo players do typically gentlemanly things like “wear white pants.” But it’s also deceptively violent. Ramming is illegal, but nonetheless fairly common, and when it happens it can lead to grisly injuries like compound fractures. A collision in Segway polo is tantamount to a low-speed car crash, with little more than a helmet to protect you.

But if Segway Polo has the violence of traditional sports, its appeal is still limited to the select group of people who already own Segways. Over the two days I spent at Gallaudet, I saw only a couple dozen spectators. Some were mystified Gallaudet students; the rest appeared to be friends or family of competitors.

Most people I talk to think the sport’s main flaw is an obvious one—the price of a Segway. But Roger Burney, who works for a cybersecurity firm in the Bay Area and name-drops the Woz within the first 45 seconds, see things differently. “You can get a Segway in the $3,000 category used. And a lot of guys make their own mallets. Compare it to a horse! Compare it to a motorcycle! Compare it to skis!”

“I think what holds the sport back is not cost,” he says with a sigh. “It’s the movie Mall Cop.”

*Correction: This piece originally suggested Davies’ comment referred to the Lebanese team, and identified Schnell’s home as in Central Florida; he lives in Miami. Although he dabbled in hacking, he did not target government computers.