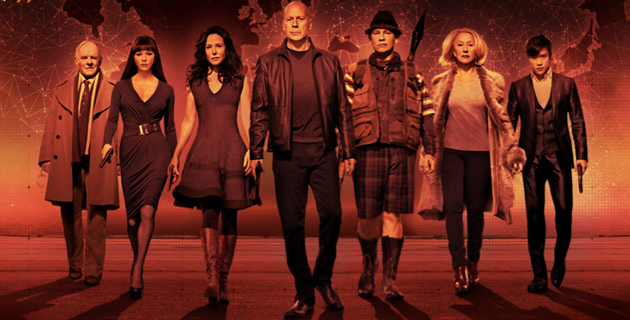 Barack Obama has been in a bunch of Hollywood movies. Granted, it’s generally in the form of archival footage, often played out of context. In Zero Dark Thirty, you can see him talking about torture. In Pacific Rim, he’s at a White House press conference taking questions on the alien invaders. In Battleship, the president is visible on a jumbotron telling America to calm down (again, on the subject of alien invasion). In last year’s Total Recall remake, his face is on the dollar bills of the future. And now, he’s also being used to promote Bruce Willis and Helen Mirren‘s latest action movie.

The ad campaign for RED 2—the sequel to 2010’s darkly humorous surprise hit RED—is mostly what you’d expect for a mid-summer release: the standard social-media push and loud commercials emphasizing the explosions, the guns, the globetrotting CIA mayhem, and the all-star cast that includes John Malkovich, Mary-Louise Parker, Anthony Hopkins, and Lee Byung-hun. (The film is directed by Galaxy Quest helmer Dean Parisot and written by the Hoeber brothers.)

The description on the YouTube version, which currently has over 26,000 views, begins by paraphrasing President Obama: “‘These folks keep America safe.’ Watch this video to meet the real heroes protecting us.” Here’s the trailer promoted on RED 2‘s official Twitter account:

They don’t listen to your calls or read your emails, but watch what they’ll do to save the world. #RED2 on July 19. http://t.co/XpKQp4QIFt

The TV spot splices together sound bites from Obama’s June 7 remarks on the National Security Agency/Edward Snowden controversy with a few bullet-riddled and goofy clips from the new film. For instance, the part when Obama says, “the people…involved in America’s national security…take this work very seriously,” is paired with the image of Helen Mirren firing two handguns out of both sides of a very expensive sports car.

The plot of RED 2 doesn’t actually have anything to do with the NSA (Willis has previously starred in a film, Mercury Rising, that features the NSA as the villain, though). The new film focuses on retired CIA operatives and an ex- MI6 killer (“RED” stands for “Retired, Extremely Dangerous”) who get sucked back into international spy games following WikiLeaks‘ publication of a classified document on a mysterious Cold War operation code-named “Nightshade.”

But according to a source close to Summit Entertainment (the film studio distributing RED 2), the studio’s marketing group saw the top news story as too good to pass up. “They were trying to be tongue-in-cheek with it and the timing just happened to worked out,” the source says. “It’s supposed to be lighthearted, and it’s not a referendum on the president or the NSA or [national security] policies, or anything like that.” After the marketing crew for the movie came up with the idea for the spot, they outsourced the production to an unidentified “outside company” that made the final ad. The spot was quickly pushed onto traditional television broadcasts, and started making the rounds online and on Summit’s “screening room.” This is the first time the studio has commissioned a TV spot like this—blatantly topical, ripped from (almost) today’s headlines, and, of course, starring a sitting American president.

Summit has no plans to do any other NSA-related advertising. And aside from the usual flurry of irate YouTube commenters, the studio is pleased with the ad’s reception. “Most consumers of the material seem to get what we’re doing here,” the source says. “We’ve gotten [largely] positive feedback.”

The White House and the NSA press offices did not respond to requests for comment. RED 2 star John Malkovich does, however, have a comment regarding NSA surveillance. When USA Today entertainment reporter Andrea Mandell asked the 59-year-old actor on the red carpet last week about whether he’s concerned about the NSA spying on him, he simply replied: “I assume it.”

RED 2 gets a wide release on Friday, July 19. The film is rated PG-13 for pervasive action and violence including frenetic gunplay, and for some language and drug material. Click here for local showtimes and tickets.