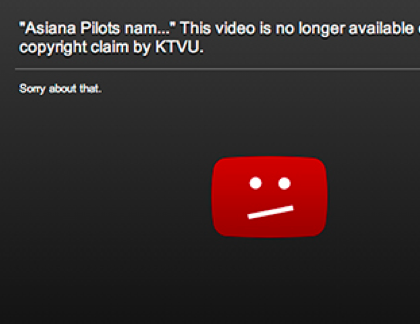 KTVU, the San Francisco TV station that reported offensive fake names of pilots involved in the Asiana Airlines crash earlier this month, has found a way to make the embarrassing mistake disappear from the Internet: US copyright law. As Media Bistro reports, YouTube videos documenting the broadcasting error made by KTVU are being taken offline, replaced with a notice that says they are no longer available because of KTVU’s “copyright claim.” But even KTVU admits that copyright violation isn’t the real reason that it’s taking the videos down:

“The accidental mistake we made was insensitive and offensive. By now, most people have seen it. At this point, continuing to show the video is also insensitive and offensive, especially to the many in our Asian community who were offended. Consistent with our apology, we are carrying through on our responsibility to minimize the thoughtless repetition of the video by others,” KTVU vice president and general manager Tom Raponi told the news site.

KTVU reported the names of the pilots involved in the San Francisco crash as “Captain Sum Ting Wong,” “Ho Lee Fuk,” “Wi Tu Lo,” and “Bang Ding Ow”—which an intern for the National Transportation Safety Board mistakenly confirmed. The news station, which is a Fox affiliate, has since apologized.

The law that KTVU is permitted to take the videos down under is the Digital Millennium Copyright Act (DMCA)—and coincidentally, this week, a subcommittee of the House Judiciary Committee is kicking off hearings that will focus on reforming it. As Mother Jones reported last week in our roundup of outdated tech laws, DMCA—which was passed in 1998 with the aim of stopping copyright infringement—has been criticized by Internet freedom advocates as harmful to freedom of speech, because it allows companies to deliver take-down notices on any content that they don’t like. Corynne McSherry, the intellectual property director for the Electronic Frontier Foundation, says that the fact that KTVU is able to take down the YouTube videos shows how the law makes it “very easy to get [fairly used] content taken down, and much harder to have it restored.”

“Here, the law is being abused to try to shut down a political conversation—and in the process, targeting clearly noninfringing fair uses,” says McSherry. “It’s always particularly disappointing to see a news organization abuse copyright law in this way—they, more than most, should know how important it is to protect fair use and free expression.”