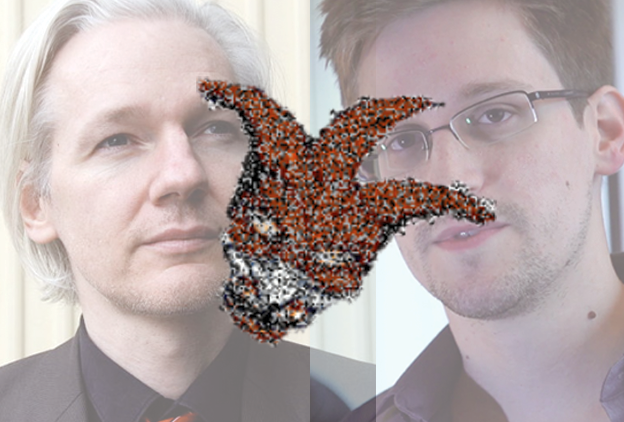 Update: On Friday, Venezuelan president Nicolás Maduro offered Edward Snowden asylum on the basis that “He has told the truth, in the spirit of rebellion, about the US spying on the whole world.” That night, the Jester took down the official presidential website of Maduro for over 24 hours, resuming service after Venezuela said it had not any communication with Snowden. Late Sunday, after Bolivia also offered Snowden asylum, he launched a denial-of-service attack against the official site of Álvaro García Linera, the Bolivian vice president.

A shadowy, self-described “patriot” hacktivist has launched a series of cyberattacks against Ecuador and says he plans to direct a similar onslaught against any country considering granting asylum to former National Security Agency contractor Edward Snowden. The hacker, who calls himself the “th3J35t3r” (the Jester) and in the past has identified himself as a former soldier, has also taken aim at Julian Assange. The WikiLeaks founder has been assisting Snowden in his efforts to seek safe haven.

On Monday, the Jester launched denial-of-service attacks against Ecuador, which is considering an asylum request from Snowden. He targeted the primary email server for the second biggest Ecuadorean stock exchange and the country’s official tourism website. Gabrielle Murillo, a spokeswoman for Ecuador’s tourism site, could not confirm the attack and said only that “the internet was working,” but the Electronic Frontier Foundation’s Dave Maass, who follows the Jester, told Mother Jones that he was unable to access the tourism website after the infiltration occurred. Officials at the stock exchange did not respond to questions sent by Mother Jones.

The Jester, who has one of his computers on display in the International Spy Museum, is famous for launching cyberattacks against WikiLeaks and  Al Qaeda-linked web sites. According to a May story in Newsweek, he’s also sought to reveal the identities of jihadists recruiting online and affiliates of the hacktivist group Anonymous. The Jester told the magazine that he views his hacking as an extension of his former military service (he claims that he was affiliated with a “rather famous” unit in Afghanistan), but he said that he has “no official relationship with law enforcement agencies.” On his website he describes himself as “pro OUR Military, LEA [law enforcement agencies], & Intel Communities who do the same job no matter who is sitting in the big seat.”

In a June 26 blog post, the Jester writes that Snowden “is not a goddam hero, here to save Americans from ‘the government’ because of privacy infringements and breaches of the 4th amendment, he is a traitor and has jeopardized all our lives.” He launched a similar tirade against Assange, who has been living in London’s Ecuadorean Embassy for more than a year to dodge extradition, writing, “[L]et’s not forget Assange isn’t seeking asylum because he’s some heroic whistleblower or do-gooder. He’s wanted for questioning on a rape charge.”

On July 1, the Jester tweeted this:

In a subsequent series of tweets, the Jester alluded to hacking into the embassy’s fire alarm system to force Assange out of the building. If Assange were to leave the embassy compound, he would face extradition to Sweden—where he’s under investigation for sexual assault—or potentially to the United States, where Assange fears he could be prosecuted in connection with the publication of classified information allegedly leaked by Bradley Manning.

Yesterday the Jester tweeted photos of what he believed to be fire alarms on the exterior of the Ecuadorean Embassy, asking locals to crowd-source the name and logo of the alarms. The Jester also tweeted the following map, isolating what he says are the wifi networks that Assange may be using within the embassy. 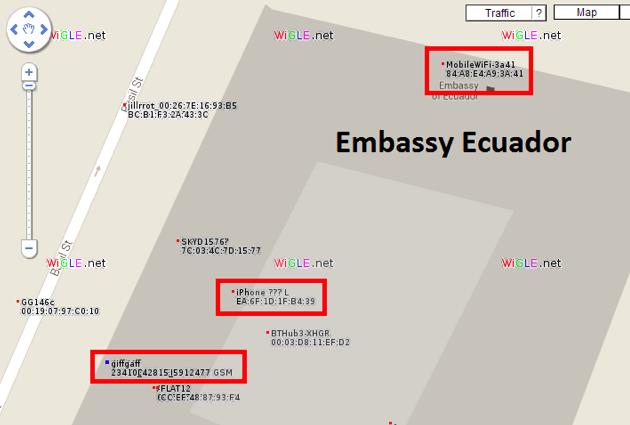 In addition to targeting Assange and Ecuador, the Jester circulated a list of 52 servers used by the Venezuelan government, which Snowden has reportedly also petitioned for asylum. The hacker told FoxNews.com on Tuesday that he would treat countries that consider housing Snowden as “enemies” (Snowden is requesting asylum in at least 21 countries). The Jester did not respond to an interview request from Mother Jones.

In a blog post earlier this week, the Jester wrote that he didn’t fear prosecution: “Before you start slinging mud at me about my own activities. Two things to note. I never target the US and If I am arrested, and convicted in due process by a jury of my peers I will consider that justice will have been served.”