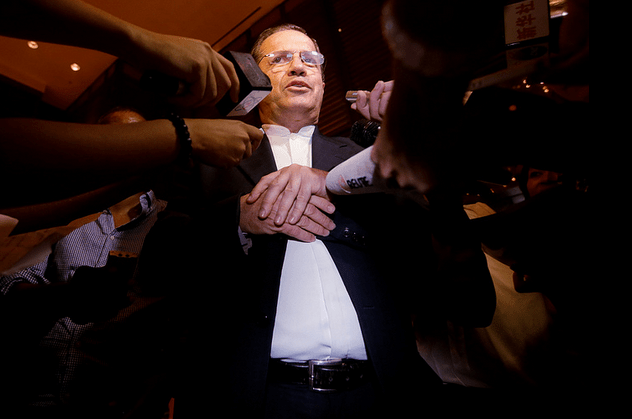 Update: Ecuador claims that the bug came from the Surveillance Group Limited, one of the largest private surveillance companies in the United Kingdom. Ecuador is asking the UK for help on further investigations. The company has denied the claim.

Ecuador’s foreign minister Ricardo Patiño has claimed that a hidden microphone was recently found in the country’s embassy in London, where WikiLeaks founder Julian Assange is taking refuge. Patiño has yet to provide further details about the alleged bugging, but the AFP reports that he plans to publicly point the finger at the country he believes was involved on Wednesday. Obama administration officials tell Mother Jones they will not comment on Patiño’s allegations or say whether the United States was involved in any bugging of the embassy. And a spokeswoman for the Ecuadorean Embassy in London says, “At the moment, there’s nobody saying anything more.”

The allegations come at a tense moment, as the international intrigue involving Edward Snowden and Assange, who is assisting the former former National Security Agency contractor in his quest for asylum, increases. Recent reports based on documents leaked by Snowden reveal that the United States has bugged European Union diplomats in the United States and spied on members of the G20 summit in London.

In a statement (in Spanish) posted on the web site of Ecuador’s Ministry of Foreign Affairs, Patiño said: “We regret to say that this is another testament of the loss of ethics at the international level.” He added, “We are infiltrated from all sides.”

The device was allegedly found in the office of ambassador Juan Falconi Puig during a routine sweep, according to AFP and the Australian newspaper the Age. Many sensitive discussions have taken place in the office, including conversations between Patiño and Assange.

The allegations come as former Snowden seeks asylum in Ecuador—a request that the country says it will not consider unless Snowden manages to reach Ecuadorean territory. Ecuador also continues to shield Assange from extradition to Sweden, where he’s wanted for questioning in connection with a sexual assault investigation. Last night WikiLeaks tweeted a comment on the alleged bugging and the news that a flight from Moscow carrying Bolivian president Evo Morales was diverted to Austria after several European countries refused to allow the jet cross their airspace, believing that Snowden might be on board:

Caitlin Hayden, a spokeswoman for the National Security Council, says she has “no comment” on the incident. But she notes that the issue of who supposedly planted the bug “is a question for Ecuador.” Asked if the US had any role in the bugging, a spokesman for the Office of the Director of National Intelligence declined comment.