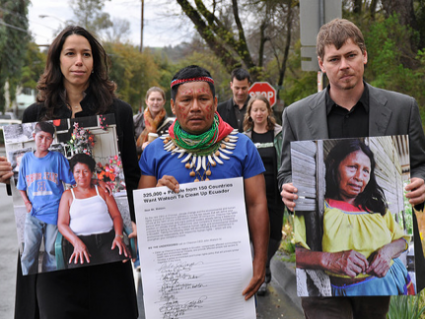 Thanks to disclosures made by Edward Snowden, Americans have learned that their email records are not necessarily safe from the National Security Agency—but a new ruling shows that they’re not safe from big oil companies, either.

Last month, a federal court granted Chevron access to nine years of email metadata—which includes names, time stamps, and detailed location data and login info, but not content—belonging to activists, lawyers, and journalists who criticized the company for drilling in Ecuador and leaving behind a trail of toxic sludge and leaky pipelines. Since 1993, when the litigation began, Chevron has lost multiple appeals and has been ordered to pay plaintiffs from native communities about $19 billion to cover the cost of environmental damage. Chevron alleges that it is the victim of a mass extortion conspiracy, which is why the company is asking Google, Yahoo, and Microsoft, which owns Hotmail, to cough up the email data. When Lewis Kaplan, a federal judge in New York, granted the Microsoft subpoena last month, he ruled it didn’t violate the First Amendment because Americans weren’t among the people targeted.

Now Mother Jones has learned that the targeted accounts do include Americans—a revelation that calls the validity of the subpoena into question. The First Amendment protects the right to speak anonymously, and in cases involving Americans, courts have often quashed subpoenas seeking to discover the identities and locations of anonymous internet users. Earlier this year, a different federal judge quashed Chevron’s attempts to seize documents from Amazon Watch, one of the company’s most vocal critics. That judge said the subpoena was a violation of the group’s First Amendment rights. In this case, though, that same protection has not been extended to activists, journalists, and lawyers’ email metadata.

The Electronic Frontier Foundation (EFF) represents 40 of the targeted users—some of whom are members of the legal teams who represented the plaintiffs—and Nate Cardozo, an attorney for EFF, says that of the three targeted Hotmail users, at least one is American. Cardozo says that of the Yahoo and Gmail users, “many” are American.

“It’s appalling to me that the First Amendment has no bearing in this case, and that the judge simply assumed that all of the targets aren’t US citizens—when in fact, I am,” says a human rights activist from New York who has been advocating on behalf of the indigenous community, doing both volunteer and paid work, since 2005. He has never been sued by Chevron, nor been deposed. He wishes to remain anonymous—because his legal fight against the subpoena is still pending. The activist received a notice of the subpoena from Google last year (it has not been granted yet.) Chevron is seeking information including, but not limited to, the name associated with the account and where a user was every time he logged in—for the past nine years.

“Chevron is trying to crush, silence, and chill activism on behalf of the people they screwed over,” the activist argues. Michelle Harrison, an attorney for EarthRights International, tells Mother Jones that her clients aren’t comfortable going on record about the subpoenas they’ve received, because “Chevron’s dogged pursuit of anyone that dares speak out against them is regrettably having precisely the chilling effect we warned the court it would.”

Advocates for the plaintiffs in the Chevron case say that subpoenaing the email records is the company’s latest nuclear tactic to win a lawsuit it keeps losing. Chevron was ordered to pay $9 billion in damages in 2011 and to issue a public apology. After the company refused, a judge ordered the damages to double. The Supreme Court has declined to hear Chevron’s appeal. The extortion case is set to go to trial on October 15, after Kaplan—whom the Ecuadorean plaintiffs once asked to be removed from the case—refused to delay it.

Cardozo says there are 101 email addresses listed in the subpoenas to the three tech companies, but EFF has found only two that are owned by actual defendants in the lawsuit. “Subpoenas of nonparties are generally quite routine,” says Eugene Volokh, a professor at the University of California-Los Angeles School of Law. But Karl Manheim, a professor at the Loyola School of Law in Los Angeles, notes, “The parties seeking the info have to establish its relevance to the case; you can’t just go on a ‘fishing expedition’ or on a hunch.”

Julian Sanchez, a research fellow at CATO, says that “even assuming the account holders aren’t citizens, it doesn’t automatically follow that the First Amendment is irrelevant.” But he notes that while anonymous speech made by Americans is protected under the Constitution, “courts have been inconsistent in applying that protection against civil subpoenas aimed at identifying anonymous internet users.” In the case Dendrite International, Inc. v. Doe No. 3, for example, an appellate court held that a company was not allowed to unmask users who had criticized the company on a Yahoo message board.

Manheim says the judge’s invocation of citizenship is “wrong” in this case and the users should appeal. “The US Constitution applies to all persons (even foreign nationals) within US borders and to US persons abroad. While the targets of the subpoenas are outside of US jurisdiction, the subpoena itself is operative within the US. So the Constitution should apply.” (Chevron did not respond to request for comment.)

“I think if the NSA scandal has taught us anything, anyone who says that ‘it’s just metadata’ doesn’t know what metadata is—if I want to spend the night at my friend’s house and use his computer, that’s my business,” Cardozo says. “And if Judge Kaplan thinks seizing metadata is routine, he doesn’t know how powerful it can be.” The activist adds, “It’s a slippery slope. Once one thing is granted, it will only be easier to ask for more.”