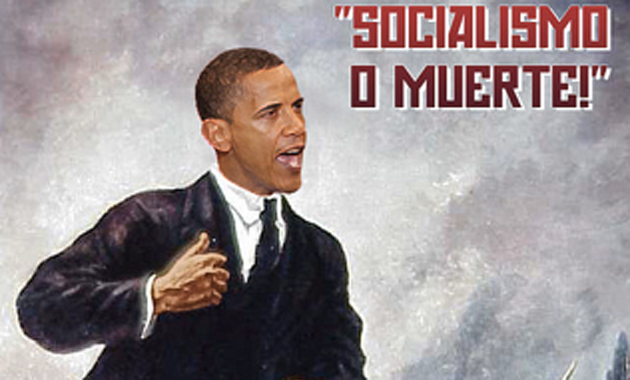 After a meeting with Vietnam’s president Truong Tan Sang on Thursday, President Barack Obama said the following to reporters (emphasis mine):

At the conclusion of the meeting, President Sang shared with me a copy of a letter sent by Ho Chi Minh to Harry Truman. And we discussed the fact that Ho Chi Minh was actually inspired by the US Declaration of Independence and Constitution, and the words of Thomas Jefferson. Ho Chi Minh talks about his interest in cooperation with the United States. And President Sang indicated that even if it’s 67 years later, it’s good that we’re still making progress.

(Ho Chi Minh was a Vietnamese communist and nationalist revolutionary leader who died in 1969. He fought alongside Allied forces during World War II, but fought American forces during the Vietnam War.)

Some conservatives have chosen to freak out about that second sentence. For instance, here’s former tea party congressman Allen West:

Ho Chi Minh was inspired by Jefferson: POTUS gaffe or insult? Regardless he owes Vietnam vets & families an apology. http://t.co/peXuolrPzc

Several conservative media outlets blasted the president on similar terms. “Obama may have just been trying to flatter his guest who was obviously eager to show that Ho was not the monster history shows him to be,” Chris Stirewalt, digital politics editor for Fox News wrote. “But his connection between the American founders and Ho shows either a massive lack of historical knowledge on the part of the president or a remarkable degree of moral flexibility.” (The Drudge Report quickly picked up the Fox piece.) The headline at Breitbart.com read, “Obama Praises Communist Dictator & American Enemy Ho Chi Minh.” And so on and so forth.

Yes, it is true that the United States once waged a disastrous, pointless, and horrific war against Ho Chi Minh and the people of Vietnam. But Obama’s comment wasn’t a gaffe or insult to American war vets, as much as someone like Allen West would like it to be. What Obama said is literally a historical fact. In September 1945, Ho Chi Minh delivered the Declaration of Independence of the Democratic Republic of Vietnam in Hanoi to a crowd of nearly a million Vietnamese. Not only was the “The Star-Spangled Banner” played by a Vietnamese band during his address, but he opens his speech by quoting Thomas Jefferson. Here’s the excerpt:

“All men are created equal. They are endowed by their Creator with certain inalienable rights, among these are Life, Liberty, and the pursuit of Happiness”

This immortal statement was made in the Declaration of Independence of the United States of America in 1776. In a broader sense, this means: All the peoples on the earth are equal from birth, all the peoples have a right to live, to be happy and free.

So there you go. Anyone with the capacity to Google “ho chi minh thomas jefferson” would have been able to find all of this in seconds. Wait until Allen West and right-leaning editorialists discover that Karl Marx was a supporter of Abraham Lincoln and Ulysses S. Grant. Or that Margaret Thatcher supported the ultra-Maoist, genocidal Khmer Rouge in the 1980s.