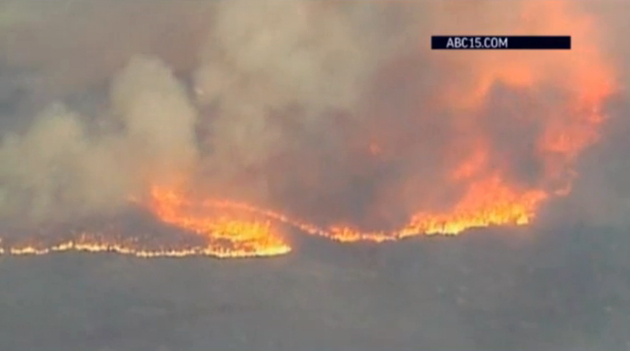 UPDATE, Monday, July 1, 5:00 p.m. EDT: The emergency shelters used by wildland firefighters have a good track record for preventing deaths, but are rendered useless if put in direct contact with fire, a firefighting equipment specialist for the US Forest Service said.

Tony Petrilli said the most up-to-date version of the shelter, in use since 2003, has been deployed 116 times with only two fatalities. Essentially an aluminum sleeping bag coated with silica, the shelter is designed to capture breathable air and keep out heat. But if a fire burns directly over the bag, it can fall apart, Petrilli said; firefighters are trained to look for a spot to roll the bag out that will be away from direct flames, but in the type of drastic situation where the bag is needed there is no guarantee such a spot will be available, and emergency shelter sites are not predetermined, he said. 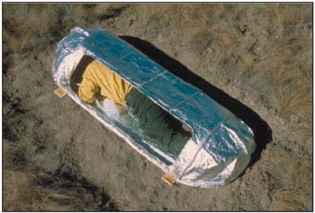 “The best instructions we can give is that it’s up to you to find the best deployment site,” he said.

Petrilli declined to comment on the effectiveness of these shelters in yesterday’s deaths, citing the ongoing investigation. It’s unclear at this stage whether all the firefighters who lost their lives were able to make it into their shelters in time, or whether the shelters could have failed.

Heat will eventually seep into the bag if left near a fire for more than a few minutes, Petrilli said. The human body can withstand temperatures of up to 300 degrees F for a short period of time, but temperatures within wildfires can easily exceed 1,000 degrees.

“Anything wrapped in foil that gets exposed to heat, is going to heat up,” he said. “It’s only a matter of time.”

19 wildland firefighters were killed in Arizona yesterday fighting the Yarnell Hill Fire near Prescott, a forested town in the mountains north of Phoenix.

The group, part of the City of Prescott’s Granite Mountain Hotshot crew, was trying to escape from the worsening blaze to a predesignated safety zone when the fire, driven by high winds, suddenly changed direction and overwhelmed the team, a spokesman for the Prescott Fire Department, Wade Ward, told Mother Jones.

“It happened too fast,” Ward said. “It’s nothing you can outrun.”

Ward said at the time of the deaths, the massive fire was speeding through the forest at up to a mile a minute, with flames up to 100 feet high. One member of the crew survived, who had gone to relocate the group’s vehicle when the flames swept in.

The incident took the lives of the most firefighters since 9/11, when 341 firefighters were killed, according to the National Fire Protection Association, and the most wildfire fighter deaths since the 1933 Griffith Park fire in California, which killed 86. Until Sunday, Arizona had lost only 22 firefighters to wildfires since 1955, far fewer than Colorado or California, according to federal data. Arizona, like much of the Southwest, is in the midst of an ongoing drought, one of the affects of climate change scientists believe is likely to worsen wildfires into the future.

Several members of the team were found within their fire shelters, a heat-reflecting bag, part of the firefighters’ standard equipment, that they are trained to unroll and climb into as last resort when escape from a fire becomes impossible. Although the crew was in constant radio contact with a command team, Ward said, it remains unclear whether the shelters were correctly deployed and why some crew members weren’t able to make it inside theirs. The department is investigating the incident, Ward said.

This type of emergency shelter is widely carried by wildland firefighters nationwide and generally trusted as an effective last-ditch safety tool, said Casey Judd, president of the Federal Wildland Fire Service Association, which lobbies on behalf of federally-employed wildland firefighters (the crew killed in Arizona were managed by the City of Prescott). Still, Judd said, the shelters “are not foolproof.”

“You can get cooked inside,” Judd said. “It’s like being a baked potato.”

In 2001, four firefighters were killed inside their shelters (an older version of the one now in use) while fighting the 30-Mile Fire in Washington; a subsequent federal investigation found that the shelters themselves were not at fault, but the location chosen for their deployment by crew commanders.

Paul Summerfelt, a veteran wildland fire commander based in Flagstaff, Ariz. who was familiar with the Granite Mountain crew, said they were highly trained, experienced firefighters who were likely caught off-guard by rapidly changing conditions.

“Something went wrong,” he said. “Obviously they were in a spot, they felt they were OK, and then something changed.” An official account of the incident has not yet been released.

Summerfelt, who is currently managing a different crew in Colorado, said the deaths left the small, tight-knit wildfire-fighting community feeling “like we’ve been sucker-punched.”

“To have an event like this where you lose a crew, that’s unprecedented,” he said. “Our thoughts and prayers are with their families, and we honor them as a crew and as individuals. We’re thankful for having had the opportunity to know and work with them.”

The fire is still being fought, with 800 acres burned as of Sunday evening.