If you’re one of the 37 million Americans with student loan debt, you’re in for a real treat come July 1. That’s when interest rates on federal student loans are set to rise to 6.8 percent—double the current rate of 3.4 percent. That deadline has lawmakers scrambling for a fix. There are a bunch of proposals out there, including Massachusetts Sen. Elizabeth Warren’s call for students to be allowed to pay the low, low rate that big banks pay for short-term borrowing; a plan President Barack Obama laid out in his budget in April; and the GOP plan that just passed the House—a plan Obama hates.

Whatever lawmakers and the president ultimately decide matters a lot. Over the past 25 years, the cost of going to college has spiked 440 percent. Since 2004, student loan debt in this country has tripled, and now stands close to $1 trillion. Check it out: 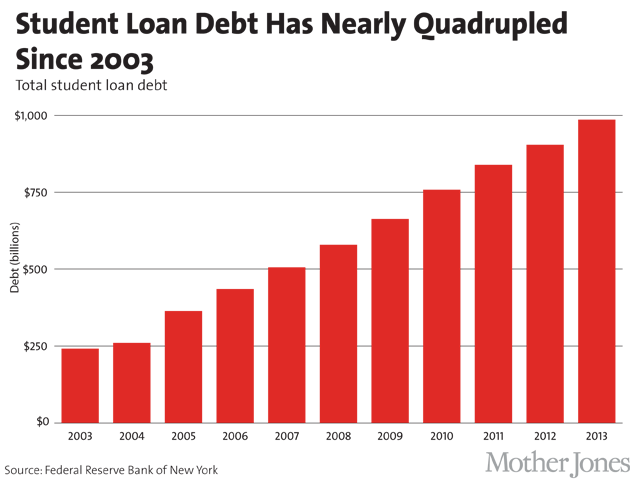 Some 60 percent of students have to take out loans to finance their education, and they’re borrowing more than ever before. In 2012, more than half of borrowers took out over $10,000 in loans. The next chart shows how the amounts students borrowed climbed between 2005 and 2012: 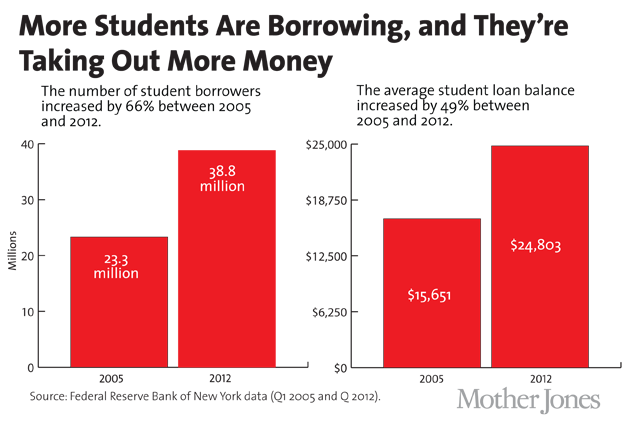 Although mortgage debt is still the largest category of debt in the United States, the amount of debt held by students recently surpassed both credit card and auto loan debt. And unlike car and credit card debt, which has stayed fairly flat, student loan debt is on a clear upward trajectory: 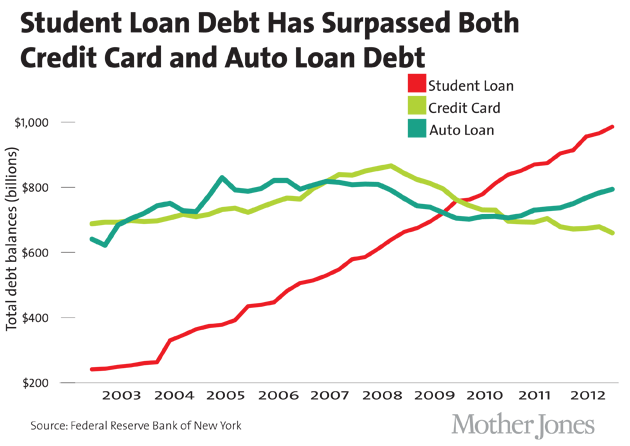 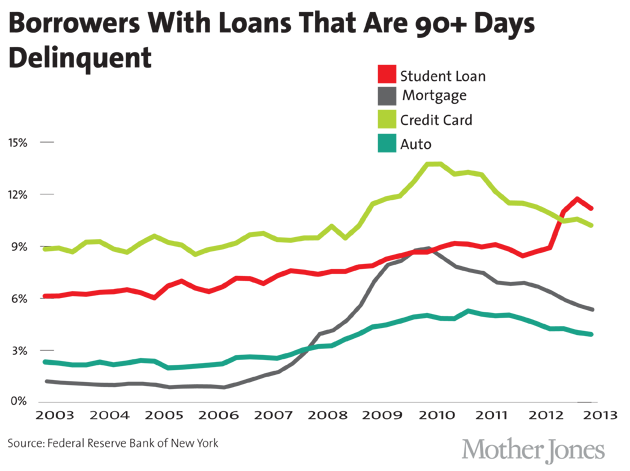 We took a look at politicians’ proposals for remedying this gloomy state of affairs, both the long-term solutions and the short-term band-aids. Here’s a round up:

LONG-TERM FIXES
Obama’s plan: Under the plan Obama laid out in his budget, the interest rate at which student loans are issued would vary depending on the economy. Rates would be pegged to the rate at which the government borrows money over the long term (currently at around 2 percent). The president’s plan would add 0.93 percent to that rate for loans to financially needy undergrads, and 2.93 percent to undergrad loans that are not need-based. The Congressional Budget Office says that this would mean that in the next school year interest rates would be 3.43 percent and 5.43 percent, respectively.

One drawback of this plan is that there is no limit on how high initial interest rates can be set year to year. But once the student has borrowed the money, the interest rate would be fixed for the life of the loan. Experts say this is a good thing. “Students have a great fear of uncertainty around college,” says Beth Akers, an education policy fellow at the Brookings Institution. “A fixed interest rate simplifies this question of going to college and not knowing what will be my payments in the future.”

Obama’s plan is also the only one out there that would aid low-income borrowers once they graduate by letting them cap their monthly loan payments to 10 percent of their income.

House Republicans’ plan: Last week, Warren slammed the plan put forward by Reps. John Kline (R-Minn.) and Virginia Foxx (R-N.C.) that recently passed the House, saying it would turn students into a “profit center.” Under the House GOP plan, student loan interest rates are also tied to the market rate, but the plan would add 2.5 percent to both need-based and non-need-based undergrad loans, rather than continuing the current reduced rate for needier students.

The plan would also allow interest rates to fluctuate over the life of the loan, up to a cap of 8.5 percent. That means you could take out a loan at a super-low rate, and end up paying a 8.5 percent a few years down the line. “That’s a bit of a bait and switch that I’m not very comfortable with,” says Michelle Cooper, president of Institute for Higher Education Policy (IHEP). Akers has calculated that a swing in interest rates—from 3.4 percent to 6.8 percent on a 10-year, $25,000 loan, for example—would cost students about $40 a month. That could be a week of groceries or a gas bill. Last week, Obama slammed the GOP measure, saying it would create more uncertainty for students, and vowed to veto the bill.

The GOP plan also includes no provision capping monthly payments according to income level, as Obama’s does.

Senate Republicans’ plan: Sens. Tom Coburn (R-Okla.) and Richard Burr (R-N.C.) have a proposal that adds 3 percent to the government’s borrowing rate for both needy and non-needy undergrad borrowers, except that once the student takes out the loan, the interest rate remains fixed over the life of the loan, as under Obama’s plan. In that sense, it’s sort of a compromise between Obama’s proposal and House Republicans’ bill.

Senate Democrats’ plan: Sens. Jack Reed (D-R.I.) and Dick Durbin’s (D-Ill.) plan would peg student loan interest rates to the short-term government borrowing rate, as opposed to the long-term rate that the above plans use. (This week it’s 0.045 percent.) The plan would then add a percentage determined by the Department of Education to cover administrative costs, and would include rate caps at 6.8 percent and 8.25 percent for need-based and non-need-based undergrad loans, respectively. The New America Foundation, a nonpartisan public policy shop, says the proposal would result in a significant drop in interest rates for students. 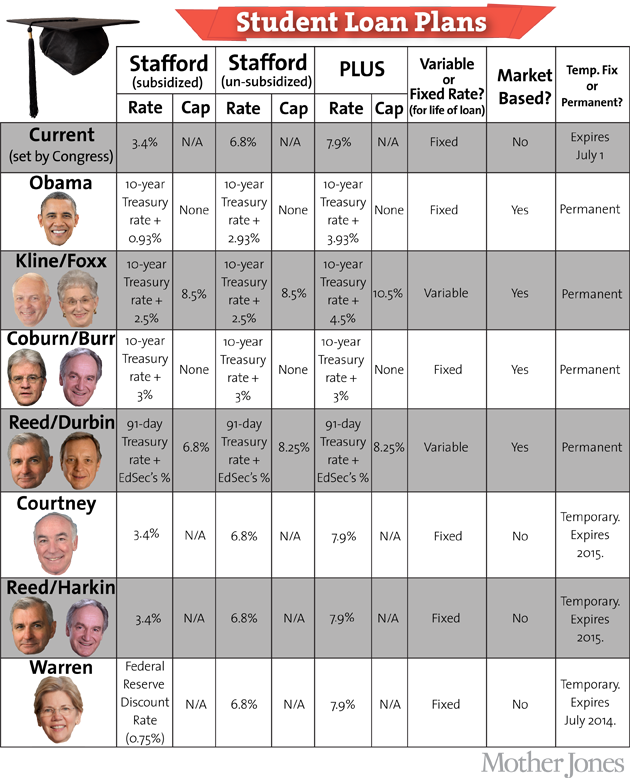 SHORT-TERM FIXES
Courtney’s plan: Rep. Joe Courtney’s (D-Conn.) plan would keep need-based borrowing rates at the current 3.4 percent for two years so that Congress has time to come up with a better solution.

The Reed-Reid-Harkin plan: Sens. Jack Reed (D-R.I.), Harry Reid (D-Nev.), and Tom Harkin (D-Iowa) introduced a plan that would do the same thing.

Here’s a look at what a few of the above plans would do to interest rates on loans for needy undergrads over time: 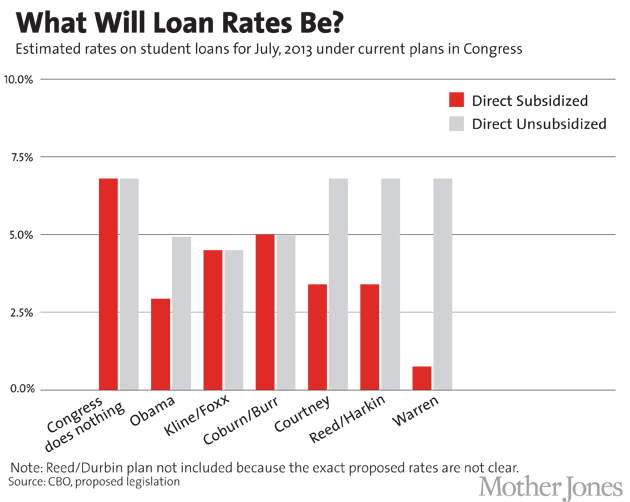 So how will it all shake out? Akers says she thinks the final plan will be something of a compromise between Obama’s plan and the House Republican proposal.

But the main piece of legislation governing higher education in the United States will expire next year, so there’s good reason to think that lawmakers may opt for a short-term fix this year and wait until next year to come up with a permanent solution. “I hope a short-term fix is not the outcome we get,” says Akers. “It would be good to get this done so we can get on with different fights.” Any long-term fix will affect a lot of Americans, and a lot of money, and Congress hasn’t made itself famous for getting things done. As IHEP’s Cooper says, “I’m more concerned with doing this right than doing it quickly.”