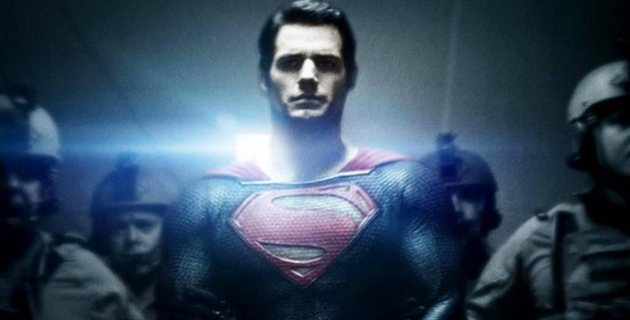 Man of Steel (Warner Bros., 143 minutes) is a commendable, if patently flawed, summer blockbuster. The highly anticipated Superman reboot, starring Henry Cavill and Amy Adams, merges the strengths and styles of its director Zack Snyder and its producer Christopher Nolan with mixed results. But the parts of the film that are exhilarating roundly compensate for the many parts of the film that are boring as all hell (dulled passion, bland dialogue, blander interactions).

Putting all that aside, one of the most fascinating things about this movie is how blatantly littered with product placement it is—roughly $160 million in product placement and promotions went into its makers’ coffers. Man of Steel has over 100 global marketing partners, surpassing Universal’s 2012 animated flick The Lorax, which reportedly had 70 partners. So if you have forgotten recently to eat at IHOP or shop at Sears, this film will remind you to do so in big letters.

But the film also doubles as advertisement for an employer arguably more noble than IHOP: The National Guard of the United States.

Here’s behind-the-scenes footage released in May by the National Guard regarding their work with Snyder and Warner Bros.

As part of their “Soldier of Steel” ad campaign, the National Guard went all-out in tying in their name and brand to the popularity and mythology of the Superman franchise. This included some commercials and theater spots that Snyder himself filmed with Guard members, essentially painting them as real-life superheroes. The ads were shot in California after Man of Steel‘s principal filming was completed, and included soldiers from across the country. “Everyday you walk past Clark Kent, then he changes into his uniform—similar to what we do here in the military,” says Specialist Jarrett Seigle, who works at the Fort Indiantown Gap Army post in Pennsylvania, and was cast from of a pool of about 6,000 soldiers.

According to Maj. Greg Galligan in the Army National Guard’s advertising branch, the Guard had approached Warner Bros. with their “Soldier of Steel” pitch, framing it as another means of effective recruitment and marketing. After Warner Bros. gave them an enthusiastic green light, the advertising branch spent about a year coordinating with the studio and the director as the film’s premiere date approached. “This was definitely the biggest campaign [of its kind] we’ve ever done,” Galligan tells Mother Jones. “And we are projecting an estimated 366 million impressions delivered through the ‘Soldier of Steel’ campaign…The military’s values align with Superman’s creed [so] this just made sense.”

The Guard has boosted its profile with the help of the entertainment industry before; they’ve had tie-ins with films such as Big Miracle and the  Transformers series, and had their soldiers star in music videos with 3 Doors Down and Kid Rock. But the magnitude of their Superman-reboot-related campaign is unique. NASCAR’s Dale Earnhardt Jr. drove his car with a “Soldier of Steel” paint scheme. The Guard hosted advance screenings of Man of Steel in multiplexes, and sent out Man of Steel-themed direct mailers to potential recruits providing details on the reserve military force. 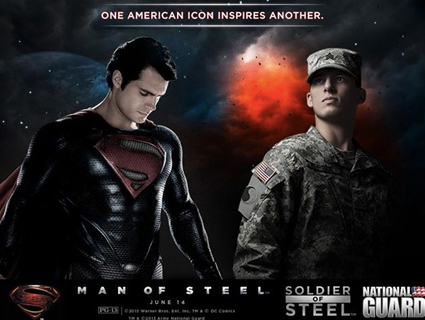 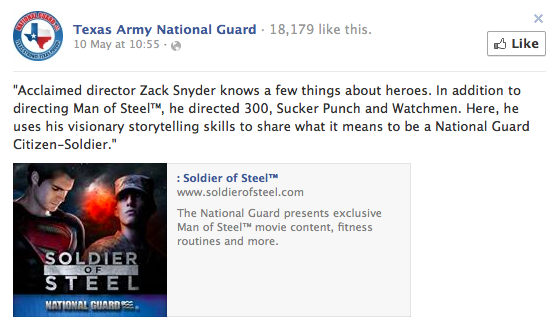 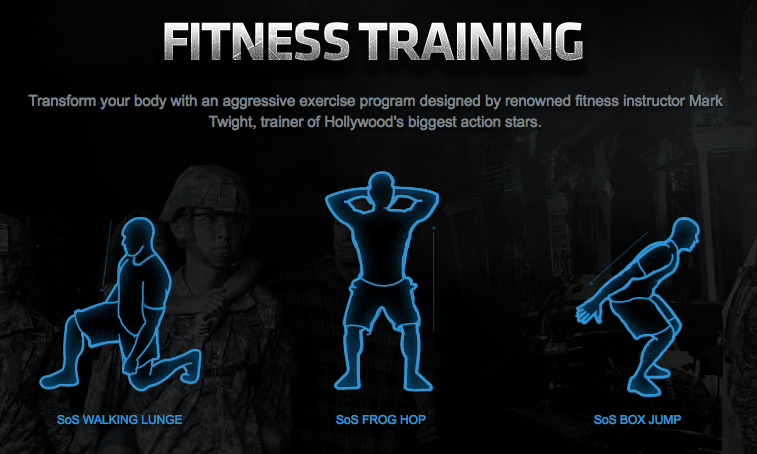 And a game, downloadable for your smartphone: 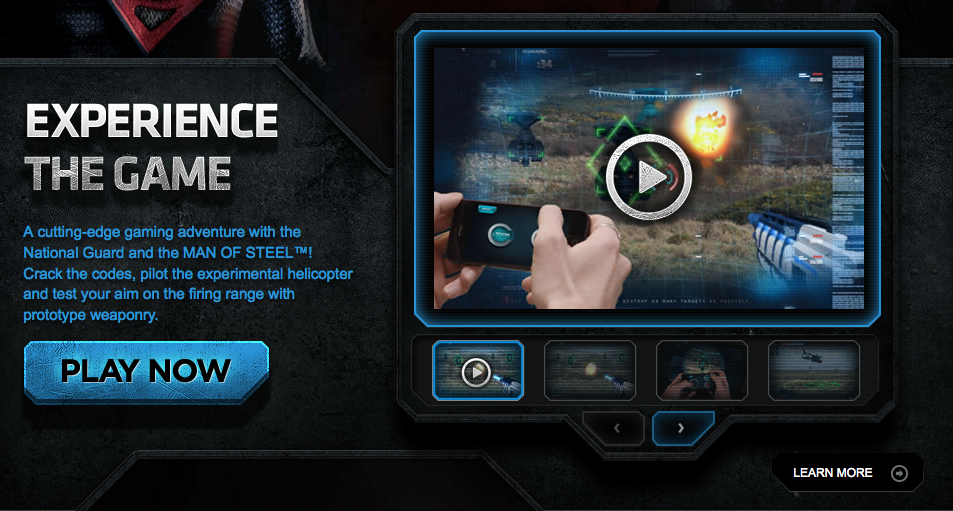 This isn’t the first big-budget action movie released this summer to partner with men and women who’ve served in the American armed forces. J.J. Abrams’ Star Trek Into Darkness included cameo appearances by four war veterans, and the film’s official website promoted the work of The Mission Continues, a nonprofit that awards community service fellowships to vets.

The National Guard’s mission is to generate interest and, ideally, woo more citizen soldiers with this campaign. The Guard’s advertising branch keeps an eye out for projects in Hollywood that could potentially show Guard members in a positive light, and does what it can to strike up a partnership. As Galligan tells me, “Our research demonstrates that movie theaters are a great venue for reaching our key recruiting demographic of 17-24 year olds.”