If you care about saving the climate, there’s good news and bad news this week, courtesy of a voluminous new report on Americans’ personal and consumer behavior in relation to global warming that’s just out from the Yale and George Mason research teams on climate change communication.

First the good news: It looks like energy efficiency is really winning over the American consumer. Not only do half of Americans now say they’ve purchased a kitchen appliance that’s energy efficient, but looking forward, impressive majorities say that they want their next appliance or car purchase to be green. Three-quarters say as much for kitchen appliances, 71 percent for their next water heater, and 61 percent say they want their next car to do 30 miles per gallon or better.

Something similar could be said for the market penetration of energy-efficient compact fluorescent lightbulbs. Fifty-three percent of Americans now say that “most or all” of their bulbs are CFLs. By contrast, that number was just 40 percent in late 2008. (This despite the fact that among conservatives, recent research suggests energy efficiency can be a big turn-off.) 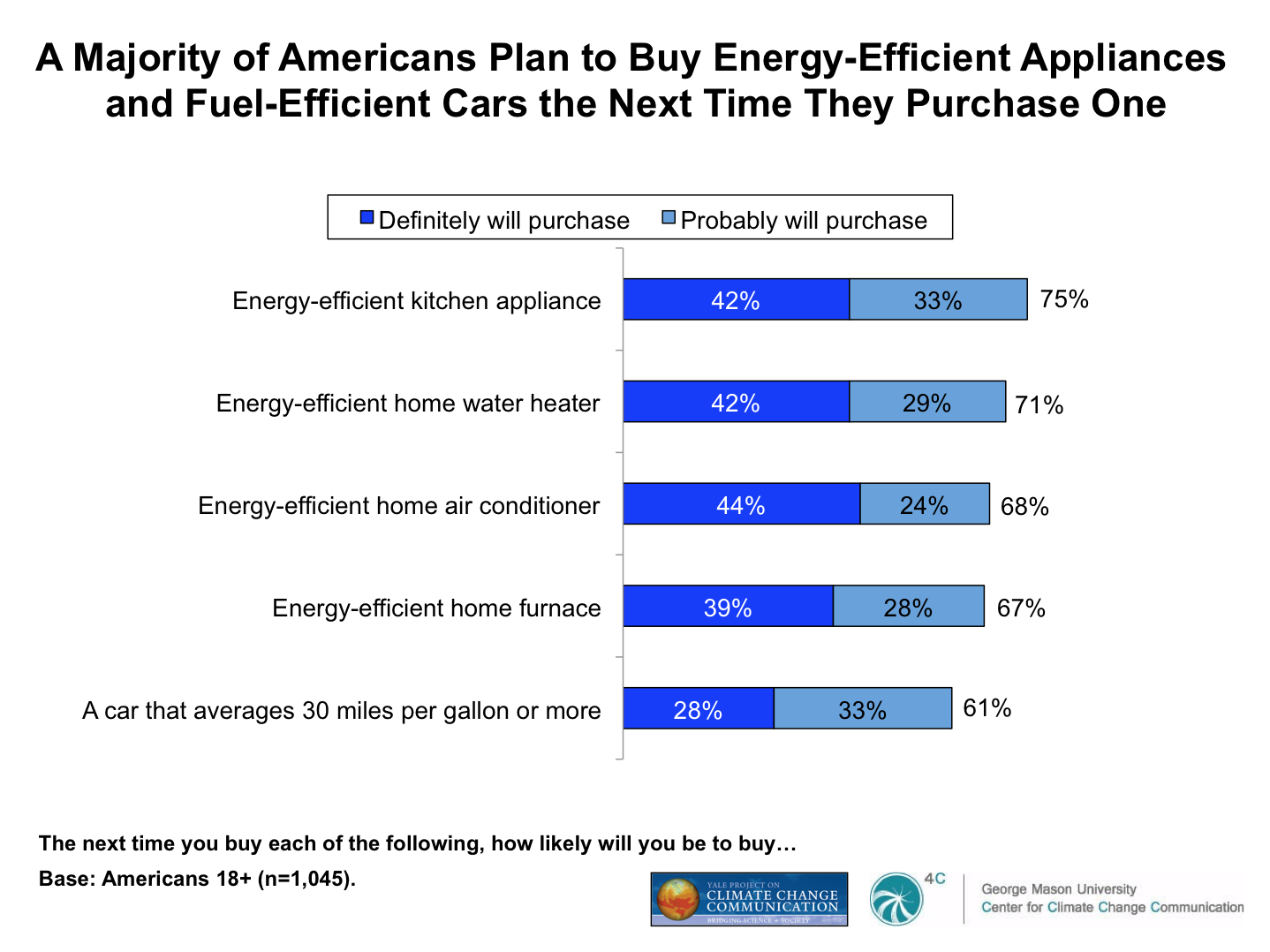 So what’s the bad news? Well, it comes in the area of what you might call “efficacy”: Americans are buying lots of green stuff, but at the same time, they’re less convinced that their personal or individual actions actually make a difference for the climate.

Here, the numbers could certainly be called worrisome: They’ve declined noticeably since the year 2008, when 48 percent of respondents said that they thought their “energy-saving actions and intended actions” would significantly reduce their contribution to global warming. That’s now down to just 31 percent. Similarly, in 2008, 78 percent of the public thought that “if most people” in the country took the same green lifestyle steps, “it would reduce global warming ‘a lot’ or ‘some.'” Now, that’s down to 56 percent. (This particular question excluded individuals who were “very or extremely sure global warming is not happening.)

Indeed, looking forward, the study found that Americans overall will be changing their airline travel patterns less out of global warming concern in the future. Meanwhile, it also reported that since 2008, there has been virtually no change in the lowly percentage of Americans (now 10 percent) who have contacted an elected official about global warming.

So what is up with us Americans—besides the obvious implication that the companies selling energy-efficient products have done a much better job of marketing than the activists selling climate solutions? Why are Americans simultaneously greener, but less convinced it matters?

According to Yale’s Anthony Leiserowitz, one of the report’s authors, it’s very unlikely that most Americans have suddenly figured out that individual energy-saving actions—while highly commendable—aren’t enough on their own to fix climate change (because instead we need major policy changes). Rather, he suggests, people’s sense of climate efficacy has declined largely because climate change itself fell out of the media, and public consciousness, in the wake of the economic collapse and throughout much of President Obama’s first term. “I think a lot of it is because we aren’t talking about this issue at all any more, so people are not being reinforced with the message: ‘So, here are the things you can do.'”

Nonetheless, the findings on energy efficiency are surely heartening. As Leiserowitz’s colleague Ed Maibach of George Mason notes, “Manufacturers of cars, home appliances, and electronic gear are doing an increasingly better job of making energy-efficient models easy, fun and popular. So, in some sense, this could be seen as a victory of market-based approaches.”

If only climate policy were half as well marketed.