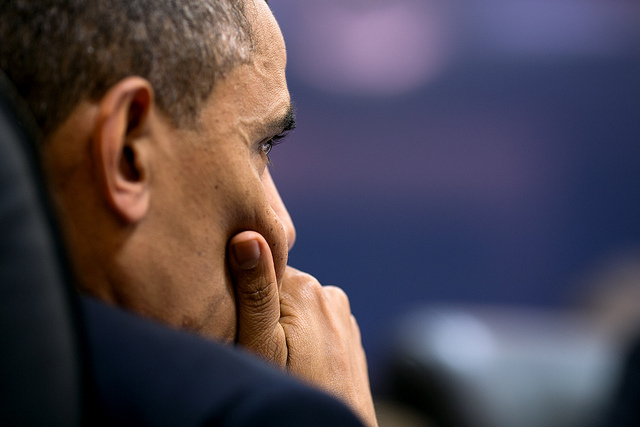 President Obama’s chief of staff and the White House’s top lawyer got wind of an inspector general’s investigation into the IRS’ singling out of tea partiers and conservative groups several weeks before the report went public. But those officials, according to press secretary Jay Carney, did not tell Obama. The president says he learned about the IRS’ screw-up only after an agency director apologized on Friday, May 10, for employees having targeted conservative groups—an apology that went viral.

Carney told reporters Monday it was “appropriate” that Obama wasn’t told of the damning IG report beforehand. And the president, he said, wasn’t angry to not have been given early notice. “He believes it’s entirely appropriate that, you know, some matters are not appropriate to convey to him and this is one of them,” Carney said.

As we’ve reported, a Treasury Department inspector general, at the behest of angry members of Congress, spent nine months probing whether IRS staffers targeted tea party groups and other right-leaning conservative outfits who had applied for tax-exempt status under the 501(c)(4) section of the tax code. Although staffers did in fact zero in on conservative groups, the IG’s report concluded that political bias did not play a role. Instead, staffers used “inappropriate criteria”—catchwords such as “tea party,” “patriot,” or “9/12 Project” (the latter a creation of conservative talk show host Glenn Beck)—to look for groups that might’ve been too involved in politics. (Groups that file their taxes under 501(c)(4) can dabble in politics, but it can’t be their “primary activity.”) IRS employees got away with this due to “insufficient oversight” by the higher-ups in Washington, the report found.

Testifying before Congress last week, Steven Miller, the acting IRS commissioner who will soon resign as a result of the agency’s tea party debacle, echoed the IG’s findings. He said IRS employees made “foolish mistakes” and that the agency’s behavior was “obnoxious.” But those employees did not have a grudge against conservative groups. Their errors, Miller said, “were made by people trying to be more efficient in their workload selection.”

“What did they know” and “when did they know it” are two big questions looming over the IRS scandal. Here’s what we know right now: Almost a month before IG’s report came out last Tuesday, a staffer in the office of White House counsel Kathryn Ruemmler learned of the report. Ruemmler herself was briefed on April 24. Soon after, she informed Denis McDonough, Obama’s chief of staff. Carney said the president was not told of the investigation because there was nothing to be done about it. Also the White House did not want to appear to be interfering with an inspector general’s report on such a sensitive issue. There is no evidence yet that Obama or his top aides knew about the investigation before this year.

Here is the IG’s report: