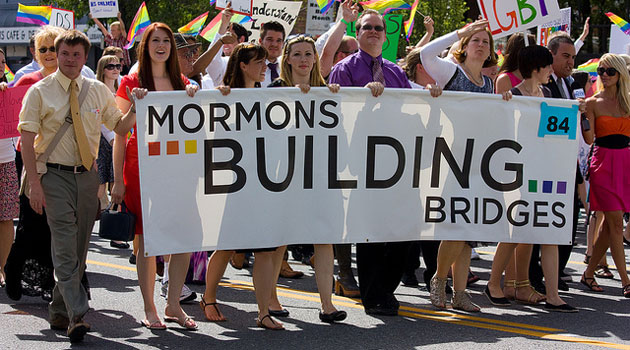 After a very long and demoralizing losing streak, supporters of marriage equality have recently experienced a string of victories so sudden and dramatic that it has their heads spinning. Just yesterday, the Minnesota House passed a bill that would make it the 12th state to legalize same-sex marriage. The vote came while the ink was still drying on Delaware’s landmark new marriage equality law, which followed on the heels—five days!—of a similar milestone in Rhode Island. Up until last November, supporters had tasted defeat on 33 state-level measures.

But after Election Day, change was in the wind. Voters in Maine, Minnesota, Washington, and Maryland came down firmly on the side of same-sex marriage. You could credit folks like Ellen DeGeneres and NFL punter Chris Kluwe and basketball star Jason Collins—and even a few die-hard Republicans such as Dick Cheney, who has come out in favor of marriage equality—for helping bring about the rapid cultural shift. And no doubt that’s a big part of it. But there’s one force, perhaps greater than any other, that shouldn’t be underestimated: the Mormon church’s political surrender on gay marriage.

It’s remarkable what has happened in the marriage fight since the Mormons decided to abandon it. Consider that the Church of Jesus Christ of Latter-day Saints was the single biggest funder and organizer of the 2008 campaign to pass California’s Proposition 8, which banned same-sex marriage in one of America’s most liberal states. The church is estimated to have directed at least $20 million to that effort, along with significant organizing clout. Documents unearthed by activist Fred Karger showed that the Mormons had 77 people working full time at the church’s Salt Lake City headquarters to get Prop. 8 passed.

After the Mormon involvement in Prop. 8 was fully exposed, the backlash was severe—and apparently unexpected.

The church, in fact, had been a crucial (if not always visible) player since the 1990s, when it helped fend off efforts to legalize same-sex marriage in Hawaii and California. As far back as 1996, high-ranking LDS officials were coordinating behind the scenes and raising hundreds of thousands of dollars to orchestrate what became the first state-level vote to ban gay marriage in Hawaii. Top church officials were also heavily involved in the creation of the National Organization for Marriage (NOM), the primary player over the last decade in the fight to outlaw gay unions.

But after the Mormon involvement in Prop. 8 was fully exposed, the backlash was severe—and apparently unexpected. The church became a target for public protests, and lost a considerable number of members who were unhappy with its involvement in a political issue that had caused individual LDS families a lot of grief. In the campaign’s aftermath, a top church leader even apologized to gay church members for the pain they’d suffered.

This is not to say that the Mormons have had a change of heart about gay marriage. The church is still adamantly opposed to it. On April 6, during the LDS’s annual conference, Boyd Packer, who is next in line to assume the church’s top leadership post, warned, “We need to be careful of the tolerance trend trap, so that we do not get swallowed up in it. The permissiveness afforded by the weakening of the laws of the land to tolerate and legalize immorality does not reduce the serious spiritual consequence that is the result from a violation of God’s law of Chastity.”

That said, the church seems to have returned to focusing on homosexuality as a personal issue rather than a political one. After years of working behind the scenes, hiring lobbyists, and mobilizing its members to fight state referendums sympathetic to same-sex marriage, it appears to have simply dropped the rope. “In the other four states last year that had marriage, you didn’t see the Mormon church anywhere,” says Kevin Nix, spokesman for the LGBT advocacy group, Human Rights Campaign.

Catholics have been “so VERY, VERY visible” one Minnesota activist emails. But “not a peep publicly re: being Mormon and how to vote.”

Janet Wallis is the mother of lesbian married daughters who has been working with a group called Minnesotans United for All Families, at first to defeat an anti-gay-marriage amendment last November, and more recently to support the legislation the Minnesota House just passed. One of her daughters used to live in Utah and worked on the 2002 Olympic Committee with Mitt Romney, so she’s well acquainted with the church’s role in LGBT politics. During the marriage fights in Minnesota, she kept wondering where the Mormons were. Catholics have been “so VERY, VERY visible” during these battles, she told me via email, but “there have been no articles, no news stories, not a peep publicly re: being Mormon and how to vote.”

Last year in Maryland, the church even went so far as to squelch an effort by some Mormons to organize against a pro-marriage initiative on the state ballot. The loss of the church as an ally has been a huge blow to foes of gay marriage, especially given its ability to deploy a host of motivated volunteers. (The efficiency of the LDS church during natural disasters has been compared to that of the German Wehrmacht.)

If nothing else, the movement against gay marriage has lost a significant source of cash. In March, the Huffington Post reported that a scant 16 Utah residents (a rough proxy for Mormons) had donated a collective total of $1,264 to four state ballot committees fighting same-sex marriage bills. Back in 2008, more than 800 Utah residents gave $2.7 million to support Prop 8.

In 2012, gay marriage proponents in four states considering legislation on the issue outraised NOM by $20 million.

Karger, the California activist who helped call attention to the church’s Prop. 8 role, believes that without the Mormons’ money and organizing clout, the fight has been left to a handful of extremely conservative Catholic groups such as the Knights of Columbus and NOM, none of which has much in the way of grassroots organizing skills. Indeed, a whopping 90 percent of NOM’s funding comes from only about 10 individuals. According to the most recent IRS filings available, it raised nearly $3 million less in 2011 than it did in 2010, a reduction of about one-third. In 2012, according to Human Rights Campaign, gay marriage proponents in four states considering marriage bills outraised NOM by $20 million.

While NOM used the specter of legalization in Rhode Island to raise money, it had a poor showing in the state. The rabidly anti-gay group Mass Resistance complained bitterly, calling NOM “clueless and ineffective,” and noting, “NOM did no serious organizing or strategic planning. Meetings with activists would be set up, then go unattended.” That’s the sort of thing that would never happen if the LDS church had been on board.

“In 2012, part of their tactical reason for pulling back was to avoid any muddying the waters for Romney.”

“NOM has always been a shell group, the purpose of which was to funnel money from a shadowy handful of funders directed by the Mormon and Catholic hierarchy,” says Evan Wolfson, the founder and president of Freedom to Marry. “Now that the Mormon hierarchy seems to have pulled back, it exposes the weakness and lack of any real grassroots depth in the opposition.”

The pullback of the LDS church may also have the unexpected effect of allowing more Republican elected officials to back marriage equality without fear of suffering at the polls. (Mormons are among the country’s most reliable Republican voters.) Republicans in Rhode Island and Delaware were a key factor in marriage advocates’ success, says HRC’s Nix.

Wolfson is cautiously optimistic. He thinks it’s too soon to know whether the LDS church has unilaterally withdrawn from the marriage fight or whether this is just a temporary cease-fire: “In 2012, part of their tactical reason for pulling back was to avoid any muddying the waters for Romney. That was a higher priority for them than even attacking gay people.”

But it would be fair to say that the gay-marriage supporters are thrilled with the rapid about-face. “It’s a new day in the fight for marriage equality, with one victory after another,” Karger says. “I’m convinced that all these wins would not be possible if the Church of Jesus Christ of Latter-day Saints had not finally abandoned its 15-year battle to demonize all LGBT Americans.”