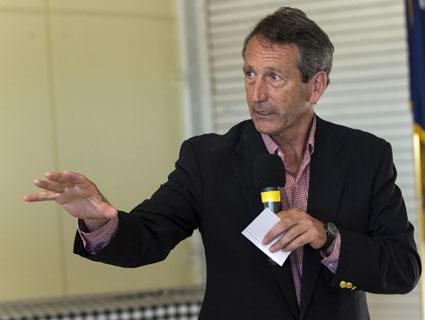 Soon after Mark Sanford, the former governor of South Carolina who resigned in disgrace in 2009, pulled off an upset win in his congressional race on Tuesday, a conservative group called the Independent Women’s Voice boasted of its role in his victory. “Independent Women’s Voice was the only outside group supporting Sanford on a significant scale, by educating voters about the facts about the Democratic candidate,” IWV president Heather Higgins said in a statement. IWV spent $250,000 on TV and print ads in the last week of the election, helping to power Sanford to victory over Democrat Elizabeth Colbert Busch in a special election in South Carolina’s 1st Congressional district.

And if the billionaire industrialists Charles and David Koch are encouraged by Sanford’s win, they, too, can claim a degree of credit, for IWV has plenty of ties to the Koch political network.

IWV, a nonprofit group that doesn’t have to name its funders (and can’t make politics the majority of what it does), is the sister organization of the Independent Women’s Forum, another nonprofit focused more on policy issues. Higgins, who chairs IWF’s board, has staked out a position as a leading critic of Obamacare. She also argues that independent women voters are not destined to vote Democratic and, instead, these women are up for grabs on political and policy matters and can be won over by Republicans—if GOPers get their messaging right.

When IWV applied for tax-exempt status in September 2004, it listed Nancy Pfotenhauer, a former Koch Industries lobbyist, as its president. (She also had a leadership position at Independent Women’s Forum.) Pfotenhauer, who is currently a Koch spokeswoman, has filled a number of roles with Koch-linked groups. She was formerly the president of Americans for Prosperity, the Kochs’ flagship advocacy organization, and is now a director at AFP. She was a vice president for Citizens for a Sound Economy, the Koch-backed predecessor to AFP. She also advised John McCain’s during his 2008 presidential campaign.

IWV does not have to disclose its donors, but the group received $250,000 in 2009 from the Center to Protect Patient Rights, a money conduit for conservative nonprofits run by Koch operative Sean Noble. As the Center for Responsive Politics has reported, the Center to Protect Patient Rights handed out $44 million in 2010 and nearly $15 million in 2011 to an array of nonprofit groups including Grover Norquist’s Americans for Tax Reform and the 60 Plus Association, which describes itself as the “conservative alternative” to the AARP. Noble spoke at a 2010 Koch donor retreat (PDF) in Aspen, Colorado. Pfotenhauer spoke at the same retreat, as did Higgins.

Higgins also briefly served on the board of the Center to Protect Patient Rights. There is no public information revealing whether IWV still receives financial support from Koch-linked sources.

There’s another curious wrinkle about IWV. In its 2004 application for tax-exempt status, the group said it would not spend “any money” on influencing elections. Yet in later tax filings, IWV changed its tune and told the IRS it spent $772,435 on elections in 2010. There are no tax filings available yet detailing IWV activity in 2012 or 2013.

IWV’s six-figure spending on Mark Sanford’s behalf was anything but a safe bet. But as it turns out, it was money very well spent.