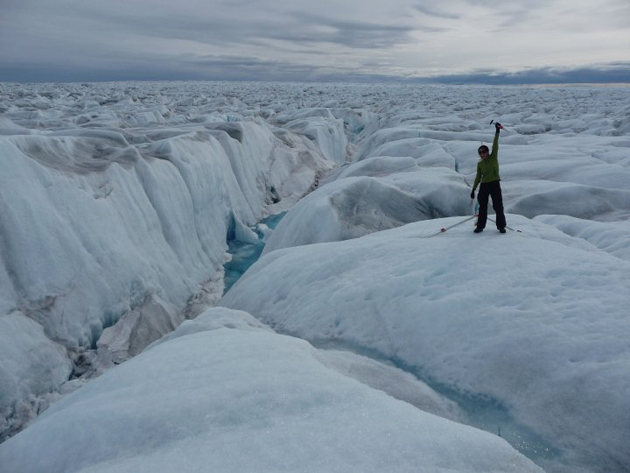 A member of Nick's team collects a GPS unit that had been measuring glacier movement over a year. Dirk van As

Back in 2006, scientists in Greenland made an alarming observation: Glaciers were crumbling into the ocean twice as fast. And not in little cocktail-sized cubes, either: Glaciologist Jason Box accurately predicted the spot where a hunk four times the size of Manhattan would later shear off into the sea.

At the same time, the inland top of the ice sheet was thawing at record levels; last summer, for the first time in 150 years, its entire surface was melting. By summer’s end, this water alone raised sea levels all over the world by a millimeter.

As Box told our Climate Desk Live audience in January, rising air and water temperatures—driven by greenhouse gas emissions—are to blame. And with more warming on the way, he made a grim prediction: melting from Greenland and the world’s other land-based glaciers could ultimately raise global sea levels by 69 feet, Box warns.

But don’t start building your flood-proof Ark quite yet: Advanced imaging released in August suggested the ice sheet is capable of quickly reversing its melting habit. And a study out today in Nature finds that the sped-up ice loss on the water’s edge, while still a problem, is unlikely to get much worse, even with a big rise in global temperatures. Taken together, these two studies suggest that Greenland’s ice melt problem isn’t as bad as experts like Box had predicted.

For the Nature study, Faezeh Nick, a researcher at Norway’s University Centre in Svalbard, led a team that took the closest-ever look at so-called “outlet glaciers,” the 200 or so outermost arms of the ice sheet that flow straight into the sea. Their findings suggest that the increase in melting rate is about to slow down, suggesting that in a medium warming scenario these glaciers will likely contribute just 19-30 millimeters to global sea levels by 2100. That’s much less than if the current acceleration of melting were to persist, but still a noteworthy share of the quarter- to half-meter rise projected by the UN’s Intergovernmental Panel on Climate Change. 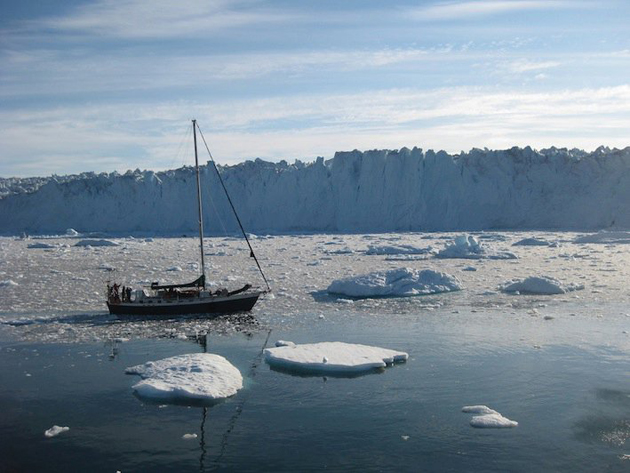 Scientists on the sailboat Gambo measure water temperature and salinity in front of a Greenland glacier. Faezeh M. Nick

The findings shed some light on what had been a big question mark in the study of Greenland’s glaciers: Of all the lost ice, how much melted from the surface, and how much broke off from outlet glaciers at the ice sheet edge?

Nailing down the contribution of outlet glaciers has proven a challenge because their behavior is determined not just by air and water temperature, but also by their shape, orientation, and the geography of underlying terrain. Using new observational data from four massive, representative outlet glaciers (including one dubbed Petermann, the source of Box’s Manhattan-sized iceberg), Nick built a new model, which tested well against ten years of ice movement records.

“We didn’t know exactly how they work,” she said. “This is the first time we’ve been able to model this behavior.”

By “behavior,” Nick means the glaciers’ steady erosion, as warming sea water melts them from beneath, ice sheet runoff melts them from above, and the packs of sea ice that keep them hemmed on land drift away. “Calving” occurs when these pressures work in tandem to break off huge chunks of ice—check out the insane flip-flop in the video below. Nick’s team captured this May 2008 “calving” event by setting set up a camera to take snapshots every ten seconds and letting it run for an hour:

Scary as these breakups are, she says, evidence suggests they come in spurts and aren’t closely linked to temperature, unlike surface melt, the other main cause of lost ice.

Don’t get the wrong idea: “[Greenland] is still losing a lot of ice,” she said. Just not as much as some of her peers had feared: “The last ten years it’s losing mass twice as fast as the ten years before. But in the next ten years it’s not going to be four times more.”

Box, who helped make the documentary Chasing Ice, said he isn’t surprised to find that disintegrating glaciers are less important in the overall scope of Greenland’s melt problem than runoff from the ice sheet surface.

“Ice loss from melting and subsequent meltwater runoff has been the dominant loss factor in recent years,” he wrote in an email. “Runoff will grow with warming as glaciers retreat out of the warming sea.” Indeed, another study confirming surface melt as the primary source of Greenland’s woes is currently in peer review, he said.