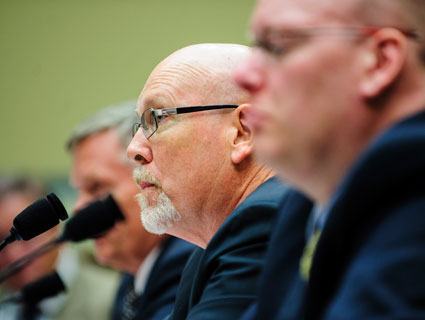 This week, several top Republicans have claimed that a supposed White House administration cover-up of the September 2012 attack on the US consulate in Benghazi, Libya, would soon bring down the Obama administration, and on Wednesday, Rep. Darrell Issa (R-Calif.), the chairman of the House oversight committee, held a much-ballyhooed hearing featuring testimony from three witnesses whom he said would “expose the full truth of what happened both before and after the attacks.” Yet while the hearing was underway, Issa tweeted a link to a Washington Post story that undercut his own claim.

As he chaired the hearing, Issa sent out this tweet: “MUST READ: @WashingtonPost breaks down @GOPoversight‘s #Benghazi hearing” and linked to a Post story filed as the hearing was happening. The article reported what was under way in the hearing room, but it also noted, “the witnesses’ prepared testimonies do not include major revelations about the attacks.” Major revelations were what the Benghazi critics were breathlessly awaiting.

The Post story did say that the witnesses’ “accounts are likely to shed new light on the oversights that made the facilities in Benghazi easy targets”—and to that extent Republicans got what they wanted. The witnesses—State Department officials Gregory Hicks, Eric Nordstrom, and Mark Thompson—presented emotional, long-awaited accounts of the attack and its aftermath. They alleged that requests for additional security before the attack and access to classified State Department documents after the attack fell on deaf ears.

Hicks, the former deputy chief of mission for the US in Libya, echoed the critics’ common complaints about the administration’s public response to the assault, slamming UN ambassador Susan Rice for initially blaming the attack on an anti-Muslim video that led to protests throughout the region. “I was stunned,” he said. “My jaw dropped. I was embarrassed.” He also testified that he was told by the State Department not to meet with members of Congress investigating the attack.

Then-Secretary of State Hillary Clinton, another top target of Republican criticism, was not mentioned until an hour into the hearing, when Hicks referred to a 2:00 a.m. phone call he received from her seeking details after the attack and shortly before the Libyan prime minister called to inform him of Stevens’ death.

Rep. Elijah Cummings (D-Md.), the top Democrat on the committee, disputed allegations that the State Department’s response to the attacks had been misleading. He called the idea that relief efforts had been inadequate—a theory that’s been promoted by House Republicans—the “most troubling” of “all the irresponsible allegations” about the Benghazi episode.

Rep. Jackie Speier (D-Calif.) sympathized with the witnesses by recalling how she had been shot five times during a fact-finding mission in 1978, while leaving the Jonestown cult settlement in Guyana. She said she had reservations about the level of security provided at that time, when California Democrat Rep. Leo Ryan became the only member of Congress to die in the line of duty in US history.

At his daily briefing, White House press secretary Jay Carney dismissed the Benghazi hearing as an “effort to chase after what isn’t the substance here.” He defended Hillary Clinton’s handling of the consulate attack and said, “This is a subject that has from its beginning been subject to attempts to politicize it by Republicans, while in fact what happened in Benghazi was a tragedy.”

Nevertheless, Issa hinted there may be more testimony in the future. “Our committee has been contacted by numerous other individuals who have direct knowledge of the Benghazi terrorist attack, but are not yet prepared to testify,” he said in a statement.