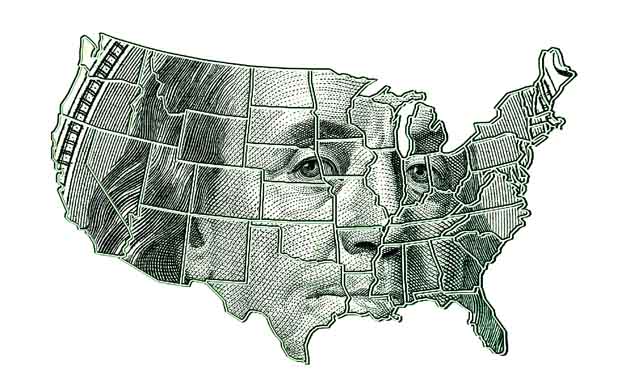 After heroic feats of arithmetic and a your-guess-is-as-good-as-mine interpretation of opaque rules and guidelines, millions of Americans will file their taxes by this Monday, April 15th.

Then there’s the bad news.

For anyone who takes a peek at where his or her income tax dollars are going, Tax Day can be maddening. Outsized chunks of our taxes fund the military, rising healthcare costs, and interest on the federal debt. Comparatively tiny amounts go to education, science, alternative energy, and the environment.

Category by category, this is contrary to what Americans want—and what we the people want is pretty clear. Despite near-constant news about how polarized our nation is, a careful look at opinion polls indicates that a strong majority of Americans actually have a coherent to-do list for Washington: we want more jobs, smaller deficits, more education funding, reduced reliance on fossil fuels, higher taxes on the wealthiest, plus—the kicker—Medicare and Social Security benefits preserved. You know, it’s the typical story of wanting to have our cake and gobble it down, too. Right?

Wrong. What’s virtually unacknowledged is that all these things could be done at once. Far from being an impossible set of demands, the collective opinion poll version of the wisdom of the American people is, in fact, a smart set of solutions—or at least it would be, if we had a government capable of following our wishes. That collective wish list would address most of this nation’s urgent challenges, while making us smarter, safer, healthier, less indebted, and better invested in our long-term future. Here’s how.

First—no shocker—it’s the economy. According to a recent Gallup poll consistent with previous findings on this issue, 99% of Americans want job creation bolstered. Lawmakers only have so many options when it comes to directly affecting job growth, and one of the quicker ways is to invest in repairing our crumbling infrastructure, currently rated D+ by the American Society of Civil Engineers. Such repairs would require substantial new spending in the near term, which would seem to conflict with another top priority of Americans: 92% say cutting spending and reducing deficits are also important. But we can invest in jobs and infrastructure and make this money back many times over just by doing the other things Americans support.

First, though, let’s toss in another issue that comes in high on American priority lists: expanding education funding. Critics say that support for more education spending shrivels when proponents are threatened with higher taxes on the middle class. But there’s no need to hike middle-class taxes; we can raise taxes only in ways favored by a majority of Americans. Do that and you could fund pre-kindergarten to research-university public education in the style that around 60% of taxpayers consistently support, and with money left over.

Case in point: a strong majority (73%) of Americans want to reduce our reliance on oil, gas, and coal, while a narrower 50% want action on climate change. A carbon tax addresses both issues by making innovation in alternative energy attractive, while reducing carbon output. Championed by economists across the ideological spectrum, such a tax has the added benefit of raising an estimated $125 billion annually with a tax of $25 per ton of carbon dioxide. Some of that money could be used to offset higher energy prices for low-income Americans and the rest for those generous increases in education funding.

We can similarly resolve this country’s long-term budget woes just by acting in ways the public is clamoring for.

Polls show that Americans want less government spending and smaller deficits. To be clear, this issue has been the subject of significant fear mongering and little sound information. Deficits are not an immediate problem, as even House Speaker John Boehner recently acknowledged, since at the moment lenders are basically paying Uncle Sam to take their money. But deficits could become a problem down the road when interest rates rise. The key is to reduce deficits before that happens, so interest on the federal debt doesn’t eat up far more of our tax dollars.

There are few specific federal budget items that a majority of Americans agree should be cut. But according to Gallup, 58% of us favor “major cuts in military and defense spending.” Ask the question in more detail and you’ll find that the average American wants an 18% reduction in the Pentagon’s budget. That can be done without compromising national security because we currently spend extraordinary sums on a force structure tailored to the Cold War and throngs of outdated or wasteful weapons systems—like the problem-ridden, historically over-budget F-35 Joint Strike Fighter that has already drained $84 billion from the US Treasury, and is projected to cost $1.5 trillion over its lifetime.

So let’s fundamentally rethink the way we conduct national security and match our armed forces to actual threats. Downsize the present American global mission and our eternal “war on terror,” bring the military’s arsenal into line with reality, and you can save around $1 trillion over the next decade from the Pentagon budget without blinking.

Next on the list: polls show that two-thirds of Americans want the wealthy and corporations to pay more in taxes, and a blockbuster majority of 90% wants a simpler tax code. It won’t surprise you to learn that the present tax code is a playground for the rich and their talented accountants. Americans for Tax Fairness, a coalition of 280 organizations (including my employer National Priorities Project), identified 10-year budgetary savings of $2.8 trillion simply by limiting or eliminating a plethora of high-income and corporate tax loopholes.

So far, by following the people’s wisdom, we’ve managed to invest significant sums in rebuilding education, the country’s infrastructure, and energy security, while achieving long-term deficit reduction. Still, one of the biggest challenges remains.

No matter what you’ve heard—including claims that the program is, over the long haul, doomed—safeguarding Social Security is easy. The system is on solid footing until 2033. Then, only simple changes are needed, like altering the payroll tax (Social Security’s dedicated funding), so it applies to all wage income instead of just your first $113,700. Most Americans don’t realize that Social Security taxes disappear on higher income. Simply by correcting that regressive policy and making a few other obvious tweaks, Social Security will be ship-shape in its present form into the distant future.

Now for the big ugly: Medicare. Healthcare costs are the real long-term budget-buster facing this country and on this issue Americans want it all—benefits preserved and spending contained. In fact, there’s a way to do both.

Estimates suggest that a third of health spending in this country is wasted in a system of uncoordinated, fee-for-service care. Some primary-care organizations have, however, bucked the trend by favoring a new “bundled payments” model of healthcare in which doctors are paid for their overall treatment of a patient rather than one test and procedure at a time. Organizations that made such changes reduced costs by 15% to 20% without compromising quality.

Medicare is pilot-testing such changes with promising results. Massachusetts lawmakers have already passed landmark cost-containment legislation that will usher in this new form of payment across the state’s substantial health sector. We should be racing to implement these changes nationally. Since there isn’t a good estimate of how much could be saved in Medicare if such major changes were implemented, let’s be particularly conservative and estimate only a 5% savings. That would still shave around $400 billion from federal spending over a decade.

With these lower health costs, as well as smart reductions in military spending and limits on tax loopholes, we’ve tallied more than $4 trillion in savings over the next 10 years. Use a fraction of that to fund a job creation/infrastructure repairs program and we’ve still achieved around $3.5 trillion in potential deficit reduction. Since that’s substantially more than experts recommend, we’ve actually freed up extra cash that could be used for any number of other priorities.

And all we did was pursue changes consistent with a people’s budget that clearly emerges from opinion polls—though you can depend on Washington to ignore such possible reforms. The outsized influence of money in politics plus gerrymandered congressional districts are among the structural problems that reward our elected officials for serving narrow special interests instead of the will of the people. And though we the people have clear priorities, we don’t do a good job of holding our elected officials accountable for pursuing a roadmap for the greater good. Still, that roadmap is there, if we ever want to use it.

Mattea Kramer is research director at National Priorities Project, a TomDispatch regular, and a frequent commentator for media outlets across the country. She’s the lead author of the book A People’s Guide to the Federal Budget. To stay on top of important articles like these, sign up to receive the latest updates from TomDispatch.com here.