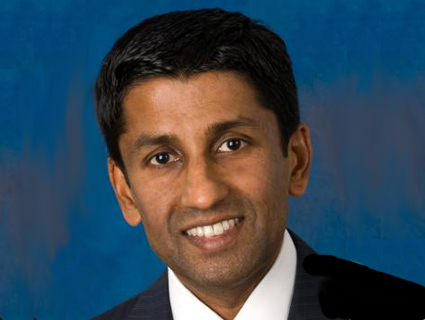 How many former Republican solicitors general does it take to prevent a filibuster?

Almost a year ago, President Barack Obama nominated Caitlin Hannigan and Sri Srinivasan to be judges on the DC Circuit Court of Appeals, a key court that has jurisdiction over federal regulations and is often seen as a stepping-stone to the US Supreme Court. Four of the 11 seats on the court are currently vacant, but Senate Republicans have refused to confirm any of Obama’s nominees, leaving the court dominated by conservatives eager to toss out federal regulations dealing with everything from air pollution to financial reform. Last month Halligan withdrew her nomination after Republicans filibustered her into oblivion.

That leaves Srinivasan, a former clerk for Supreme Court Justice Sandra Day O’Connor, who is the Obama administration’s principal deputy solicitor general and argued before the Supreme Court in the Defense of Marriage Act case. There are things liberals will like about Srinivasan (he wrote Supreme Court briefs supporting affirmative action and arguing cops should need a warrant to put a GPS on your car) and things they won’t (he’s represented corporate and anti-union interests). His nomination has gone untouched since June 2012, but next Wednesday the Senate will be holding a confirmation hearing. Monday a bipartisan group of former solicitors general sent a letter to Senate Judiciary Chairman Patrick Leahy (D-Vt.) and Chuck Grassley (R-Iowa) urging his confirmation. The list includes former Bush administration solicitors general Paul Clement and Theodore Olson, as well as former George H.W. Bush Solicitor General Kenneth Starr, who as special counsel investigated the Monica Lewinsky scandal.

“Sri is one of the best lawyers in the country,” the letter reads. “He is extremely well prepared to take on the intellectual rigors of serving as a judge on the DC Circuit.”

There are more vacancies on the federal bench today than when Obama took office. The Obama administration hasn’t put forth enough nominations to fill them all, but the chief impediment is that Republicans have slowed the judicial confirmation process to a crawl. The average Bush circuit or district court nominee waited 175 days for a vote, compared to 227 under Obama.

Srinivasan exemplifies this dysfunction. He clerked for a Reagan-appointed Supreme Court justice; he worked for Republican and Democratic administrations, and he’s endorsed by the guy who helped the GOP almost bring down Bill Clinton. Yet thanks to GOP obstruction—and the Democrats’ refusal to reform the filibuster—he still might not get confirmed.