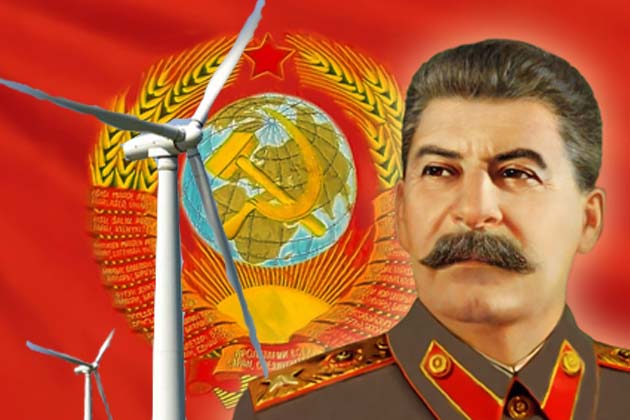 This is your energy on communism.

Seitz, who is also on the board of the shadowy corporate-government allegiance known as the American Legislative Exchange Council (ALEC), made this charmingly ahistorical claim just a week after inviting the climate-change-denying Heartland Institute to testify against the standard before the Ohio Senate Public Utilities Committee. He has taken it upon himself to determine whether Ohio should amend or repeal its clean energy law, which requires utilities to institute energy efficiency measures and to draw at least 12.5 percent of energy from renewable sources by 2025.

The Ohio legislature approved its clean energy standard almost unanimously in 2008. Since then, wind and solar companies have created 8,000 new jobs, and efficiency programs have netted rate payers $1 billion in savings, according to the non-profit Union of Concerned Scientists and the Ohio Public Utilities Commission. But in late February, Seitz introduced legislation that aims to overhaul the law.

Seitz maintains that he has launched the review because the current policies were based on the assumption that wind and solar prices would go down faster than they have over the past five years. He says the state has already deployed the “low-hanging fruit” energy-saving measures, and utilities and their industrial customers are reticent to implement the more expensive technologies that might be necessary to reach the goals set in 2008. “Nobody is for more carbon emissions than you need to have, but at the same time the question is, well, what does it cost?” Seitz told Mother Jones in an interview.

The senator’s record and alliances are probably some indication of the direction he’ll take his review process. In 2011, Seitz cosponsored a bill to repeal the renewable energy requirement entirely. He also sits on the board of ALEC, a public policy group that brings together corporate interests and conservative lawmakers to push industry-friendly bills in state legislatures, and coauthored the group’s model renewable energy standard repeal bill known as the “Electricity Freedom Act.” Another ALEC member, the Ohio-based American Electric Power Company Inc. (which stands to lose money due to the law’s efficiency standards), was the third largest donor to his 2012 campaign, according to campaign finance data. Other big utilities, including FirstEnergy Corp. and Duke Energy, have been consistent supporters of Seitz.

Renewable energy advocates are not optimistic about Seitz’s “review” of the renewable energy standard. “For Senator Seitz to create an appearance of a fair process given his close alliance with ALEC and its powerful interests is disingenuous,” said Steve Frenkel, the Midwestern director of the Union of Concerned Scientists. Seitz, on the other hand, doesn’t think his campaign donations have any influence on his decision-making. “I’m term-limited. I could give a damn,” he said, noting that he’s “done” when his term ends in 2016.

Despite Seitz’s allusions to Soviet centralized planning, recent polling shows that more than 65 percent of Ohio voters support the renewable energy benchmarks, and a majority of respondents said they would be willing to pay more for power from clean sources. “Ohioans know that their economy and their environment are benefiting from investing in clean energy technologies,” Frenkel said. “And Senator Seitz is just out of step with the people of Ohio in recognizing the important clean energy transition that the state’s already making.”