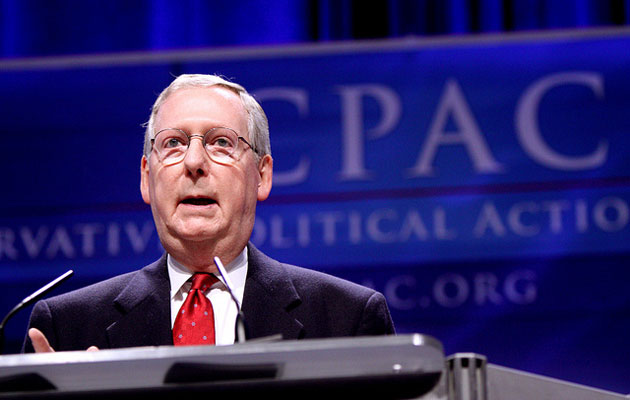 Citizens for Responsibility and Ethics in Washington (CREW), a nonprofit government watchdog, has asked the Senate ethics committee and the Federal Bureau of Investigation to probe whether aides to Senate Minority Leader Mitch McConnell improperly conducted political opposition research on federal government time.

A tape of a February McConnell campaign meeting that Mother Jones released Tuesday includes a section in which a McConnell aide states that McConnell’s “LAs”—congressional parlance for legislative assistants—helped gather background information on Ashley Judd, who was at the time considered a potential opponent in McConnell’s 2014 reelection race. The tape also refers to a “Josh” who worked on the research, which CREW’s complaint speculates might be Josh Holmes, McConnell’s congressional chief of staff.

Senate ethics rules forbid legislative assistants and other Senate employees from participating in political activities on government time. “In general, however, the ethics rules do not bar staffers from engaging in campaign activity provided they do it on their own time and do not involve government resources or property,” Tara Malloy, a government ethics expert at the Campaign Legal Center, told Mother Jones on Tuesday. You can read the relevant section of the ethics rules here. Bottom line: If McConnell’s aides did the research in their free time, they’re in the clear. But if they used government resources or worked on political matters on government time, they could be in trouble.

The Weekly Standard‘s Daniel Halper has suggested that the McConnell aide on the tape explicitly says that the LAs who worked on the opposition research did so “in their free time.” Jesse Benton, McConnell’s campaign manager, made the same argument in an interview with WHAS-11, a Louisville television station. But “it doesn’t really matter” whether the McConnell aide on the tape claimed that the political work was done in the LAs free time, explains Melanie Sloan, CREW’s executive director. “The question isn’t what somebody said, it’s what they did,” she says. “We need to know if it was on office time and with office resources. Those are the relevant questions here.”

Benton has acknowledged that McConnell’s Senate staffers do campaign work, but says they only do it in their off hours. “We do have several legislative staff that do contribute their free time, which is perfectly fine, perfectly legal, and cleared ahead of time by the ethics committee,” he told WHAS-11.

The FBI is currently investigating how the tape of the McConnell meeting was made. But Sloan says the bureau should expand its probe. “McConnell should welcome a review of the tape,” she says. “If McConnell thought it was so important for the FBI to investigate, the FBI should investigate everything about the incident. I think that’s hard to argue against. The tape certainly gives you probable cause to believe something improper occurred. It clearly merits investigation.”