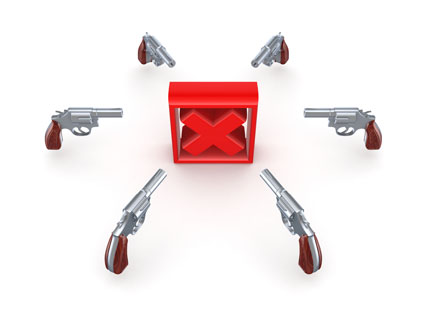 Rep. Carolyn McCarthy (D-N.Y.), one of the House’s leading advocates of gun control, said Friday that Senate Majority Leader Harry Reid (D-Nev.) has assured her that gun reform legislation will be reintroduced before the 2014 midterm elections. But for a bill to pass, it would almost certainly have to offer more concessions to the gun lobby than Sens. Joe Manchin’s (D-W.Va.) and Pat Toomey’s (R-Pa.) failed compromise on background checks that already ceded a lot of ground.

As Rep. Jackie Speier (D-Calif.) told the Hill, that could include a measure similar to the rejected amendment introduced by Sen. John Cornyn (R-Texas) to force states to allow concealed carry permit holders from other states to carry there. Speier said she would consider that a deal-breaker. But according to the New York Times, current talks among senators are focused on finding broader bipartisan ground on proposals like Manchin-Toomey (which only four Republicans voted for) and a less contentious measure to crack down on gun trafficking.

Before the Senate rejected the Manchin-Toomey compromise, McCarthy told Mother Jones that the gun violence task force she co-chairs had been in touch with Republicans receptive to gun reform but declined to name names or say how many were involved in the talks. Reps. Peter King (R-N.Y.) and Mike Thompson (D-Calif.) have introduced a Manchin-Toomey companion bill in the House that a spokesman for Thompson said last week that the congressman was “pushing forward with.” But the House’s Republican leadership doesn’t plan to act on any proposals unless the Senate manages to pass one first.

Meanwhile, groups like Occupy the NRA and Mayors Against Illegal Guns are focused on a longer game. The former has targeted gun lobbyists and corporations that have retained them; the latter is taking aim at senators up for reelection in 2014 who voted against background checks. Already, those votes appear to have affected some senators’ approval ratings.

Democratic leaders are looking to have it both ways. On one hand, they’re discussing how to reintroduce gun legislation in the Senate. On the other, they’re reaching out to potential pro-gun Senate candidates in red states to see if they’ll run in 2014.

One of the potential candidates is Montana Gov. Brian Schweitzer, who would run to replace retiring Sen. Max Baucus. Baucus was one of four Democrats to vote against the Manchin-Toomey compromise. Schweitzer has expressed support for expanded background checks in the past but also has an ‘A’ rating from the National Rifle Association and recently told the National Journal that he had “more [guns] than I need and less than I want.”