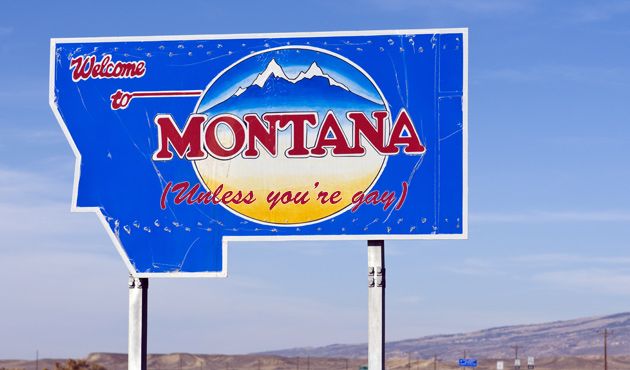 On Tuesday, the Montana legislature took a huge step toward officially decriminalizing sex between two consenting adults of the same gender, when the house of representatives—on a 64–36 vote—approved a bill to repeal the state’s ban on “deviate sexual relations,” sometimes referred to as a sodomy ban. Per the state’s law code, “‘Deviate sexual relations’ means sexual contact or sexual intercourse between two persons of the same sex or any form of sexual intercourse with an animal.” The statute was effectively nullified by the 2003 Supreme Court decision Lawrence v. Texas, but Montana, like more than a dozen other states, has kept its version of the law on the books as a matter of principle—despite repeated efforts to have it stricken.

This is progress for Montana, but as the three-dozen “no” votes attest, the repeal effort was more than a little controversial. And here’s state Rep. Dave Hagrstrom (R) explaining that—try to follow along here—he can’t vote for the bill because, like a ballpoint pen, sex has both a primary purpose and a secondary purpose, and so by definition any sex that fulfills only the second purpose is “deviate” from the primary purpose. (Under this definition, having sex while using birth control would also be classified as “deviate” activity and therefore criminal behavior, but Hagrstrom doesn’t really get into that.)

Hagrstrom: I have a lot of love and respect for a whole number of homosexual friends, so there’s no homophobic issues going on here at all with me. My question is what’s the purpose of sex? …I’ll just speak to the bill. I’m gonna vote no on this bill, but it’s just for this reason. I don’t think that homosexual sex is necessarily not deviate. Deviate isn’t a bad word. Deviate simply means not normal. It’s not typical. I kind of liken it like this. This pen has two purposes. The first purpose is to write. The second purpose is to retract so that it doesn’t leave a stain on your shirt or your purse. So it has two purposes, but one is primary and the other is secondary. To me, sex is primarily purposed to produce people. That’s why we’re all here. Sex that doesn’t produce people is deviate. That doesn’t mean that it’s a problem. That just means that it’s not doing it’s primary purpose. So I’m just speaking to the bill so I encourage people to vote red. Thank you.”

State sodomy laws are having something of a moment right now. On Monday, a court blocked Virginia attorney general Ken Cuccinelli’s appeal to uphold an anti-sodomy statute in that state.