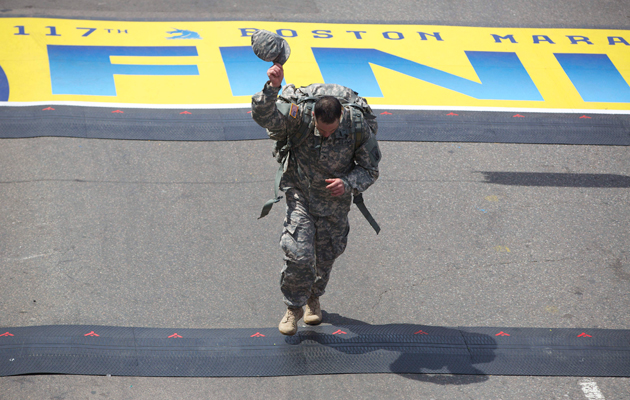 As first responders and hospitals handled nearly 200 casualties of the marathon bombings, one factor that helped them save lives was the military’s experienced with improvised explosive devices in Iraq and Afghanistan. Those wars in effect served as field trials for doctors developing a new set of best practices for dealing with traumatic lower-body wounds, helping to dramatically lower mortality rates for injuries that were once virtual death sentences.

Military hospitals “can’t do prospective research, but they can record a tremendous amount of experience and give that back to civilian research,” said Dr. Carl Hauser, a trauma surgeon at Boston’s Beth Israel Deaconess Medical Center. “This particular incident here was very much one where they had helped us.”

Area hospitals treated 187 people for injuries related to the blast, including more than a dozen in critical conduction. Because the blast originated from a device placed on the ground, most of the injuries were to the lower body, rather than the head or abdomen. Some of the wounded, like Jeff Bauman, the man carried to safety by Iraq War activist Carlos Arredondo, lost limbs in the explosion; at least 10 people had amputations.

Chief among the lessons of roadside bombs was the resurgence of the tourniquet. A staple of pre-World War II trauma care, it had fallen out of favor in recent decades because of misuse. Going into the invasion of Afghanistan, “This was still being taught in EMS courses and in trauma literature as a bad thing,” says Donald Jenkins, director of the trauma center at the Mayo Clinic in Rochester, Minn., and a 24-year Air Force veteran.

But military doctors soon found that when applied correctly and in the right situation, tourniquets pay enormous dividends—dropping the mortality rate in such instances from 90 percent to 10 percent. Now they’re standard procedure among first responders. (The bleeding in Bauman’s legs, for instance, was kept in check by a hand-made tourniquet made from a shirt.)

“How to care for these wounds—that’s almost impossible to recreate in a civilian training environment.”

Likewise, doctors in Iraq soon discovered that the conventional wisdom on how to stop blood loss in a trauma victim was basically backwards. For about half a century, doctors had relied mostly on red blood cells and crystalloid fluids. But when Jenkins was deployed to Oman in 2002, he and his colleagues began using a different formula, in which there was a much higher rate of plasma. “If you gave blood transfusions the old way, the mortality rate approached 70 percent,” he said. “But if you did it in that 1 to 1 approach, the mortality approached 20 percent.” Their policies were soon adopted by trauma centers back in the States.

“It wasn’t really until the armed services started doing that as a concerted effort in the Middle East that we realized how much the early use of blood…changes things in a number of ways,” Hauser says.

On a more logistical level, as the New York Times reported on Tuesday, hospitals in Boston adopted a basic tactic from Iraq to eliminate any unnecessary confusion as to which patients needed which kind of care. As the Times explained, surgeons “used felt markers to write patients’ vital signs and injuries on their chests—safely away from the leg wounds—so that if a patient’s chart was misplaced during a transfer to surgery or intensive care, for example, there would be no question about what was found in the emergency room.” But the largest benefit of the war experience may have been training.

“Learning how to care for these wounds, how much work has to be done, how much tissue you need to remove, how much to leave behind—that’s something that is almost impossible to recreate in a civilian training environment,” Jenkins says. “We all learned to do this when we went to the war. And those of us who learned early passed it on, literally, surgeon to surgeon, as they exchanged positions in the war. A new surgeon replacement would arrive and you’d have three days to go over with them and you’d practice side-by-side and show them, this is how you do this.

“Now we have scores, hundreds of surgeons who have been through that and know how to do this.”