That’s inevitable during a breaking news event—and in this case, even some law enforcement officials did more to confuse than to clarify. But one day later, here’s a look at some early storylines that have fizzled upon further scrutiny:

1. Cellphone service shut down in Boston. Reported by: the Associated Press, which credited the information to an unidentified “law enforcement official.” But cellphone service continued uninterrupted in the city. Verizon spokesman Torod Neptune told Mother Jones the reports were “incorrect,” and that service providers were not asked to shut down.

2. Explosions kill 12 people. Reported by: the New York Post. As of 6:58 p.m. on Monday, the tabloid’s website was still touting the 12 dead figure on a splash on its website. (It has since been updated.) The Boston Police Department has only confirmed three dead, along with 176 injuries (including 17 people in critical condition). 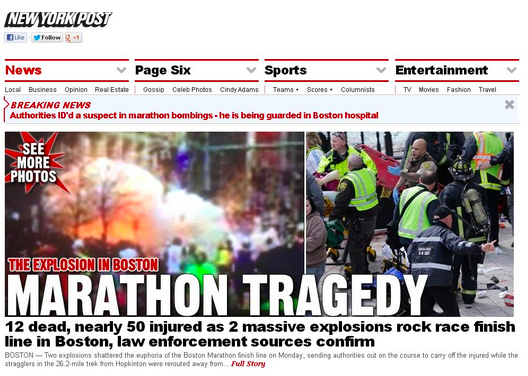 3. Bombing at JFK library. Reported by: multiple sources, thanks to a series of ambiguous statements from the Boston Police Department. Boston police commissioner Edward Davis said at a press conference Monday that police were investigating a link between an incident at the JFK library and the marathon bombing. Time‘s Andrew Katz reported on a “possible” device, citing police scanners. By Tuesday morning, the JFK library incident had been officially classified as a “mechanical fire”—as library officials had maintained all along.

4. Saudi national in custody. Reported by: the New York Post, which stated on Monday that a Saudi national had been taken into custody as a “suspect.” Although investigators said they were speaking with a Saudi man who was in the United States on a student visa and was being treated for injuries at a nearby hospital, no one has been taken into custody, and at the moment there are no suspects.

5. Five additional incendiary devices found. Reported by: the Wall Street Journal, which initially said that counterterrorism officials had found five unexploded devices around the Boston area—separate from the two detonated bombs. The New York Times reported three unexploded devices, including one at the corner of St. James and Trinity Streets, and another outside the city in Newton. But the Journal walked back its report quickly and Newton police rebutted the bomb report. On Tuesday, Massachusetts Gov. Deval Patrick confirmed that “two and only two explosive devices were found yesterday,” although many packages were investigated. “There were no unexploded explosive devices found.” Both articles have since been updated.

6. Police have security footage of a “possible suspect.” Reported by: CBS News, citing “one law enforcement official.” According to a Monday afternoon CBS News report, authorities had found a video of an individual carrying backpacks on Boylston Street minutes before the first explosion. This would be news to the Boston Police Department and the FBI, both of whom say they are still looking for a suspect and have no description of what he or she might look like.

7. Sunil Tripathi did it. Reported by: Dozens of sources, most notably BuzzFeed‘s Andrew Kaczynski, and Reddit—which had zeroed in on the missing Brown University student over the previous 24 hours. But Tripathi’s name had never been mentioned on the Boston police scanner prior to the initial reports on Twitter. And just a few hours later, NBC’s Pete Williams officially corrected the record, breaking the news that authorities had identified Tamerlan and Dzhokhar Tsarnaev as the primary suspects in the bombings. (Tripathi is still missing.)