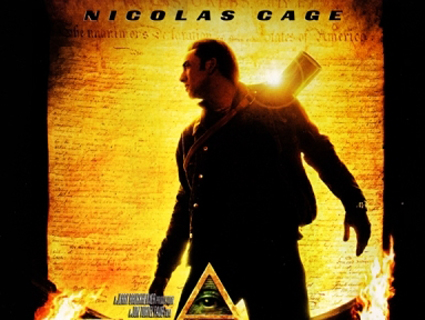 We're pretty sure HB 638 is the plot of the next "National Treasure" movie. <a href="http://en.wikipedia.org/wiki/File:National_Treasure_Soundtrack.jpg">Hollywood Records</a>/Wikimedia Commons

For 142 years, the federal government has kept a secret: A little-known constitutional amendment, designed to prevent people with “titles of nobility” from holding public office, was ratified in 1819 before being deleted from the document as part of a conspiracy by power-hungry lawyers and bankers. But the original 13th Amendment is technically still on the books; we just don’t know it.

III. The District of Columbia Organic Act of 1871, otherwise known as the Act of 1871, created a corporation in the District of Columbia called the United States of America. The act revoked prior legislation relative to the district’s municipal charter and, most egregiously, led to adoption of a fraudulent constitution in which the original Thirteenth Amendment was omitted.

V. The purpose of this act is to recognize that the original Thirteenth Amendment, which prohibits titles of nobility, is properly included in the United States Constitution and is the law of the land. The act is also intended to end the infiltration of the Bar Association and the judicial branch into the executive and legislative branches of government and the unlawful usurpation of the people’s right, guaranteed by the New Hampshire constitution, to elect county attorneys who are not members of the bar. This unlawful usurpation gives the judicial branch control over all government and the people in the grand juries. As long as the original Thirteenth Amendment is concealed from the people, there shall never be justice or a legitimate constitutional form of government.

And here’s the shocking truth: Tremblay, Baldasaro, and Christiansen don’t have their facts straight.

The amendment in question, known as the Titles of Nobility Amendment, did come quite close to passing—at least at first. With Americans wary of the threat posed by Great Britain and Napoleonic France, the proposal was approved by both branches of Congress and 12 states, only to be put on ice during the War of 1812. By the war’s end, the momentum had been lost, and the addition of new states to the union made the threshold for passage that much higher. It was never ratified.

Notwithstanding that detail, the idea of a stealth constitutional amendment has gained traction on the far right. It began in the early 1990s, when a publication called AntiShyster (which is what it sounds like) alleged that the original 13th Amendment was, in fact, on the books, and that it barred lawyers from holding office. As this 1999 article in the Southern California Interdisciplinary Law Journal documented, the “thirteenther” conspiracy has since been embraced by anti-government extremists who have alleged that the secret amendment gives them cover to kill police officers.

This isn’t the first time the missing amendment has been raised as a political cudgel. In 2010, the Republican Party of Iowa called for “the reintroduction and ratification of the original 13th Amendment, not the 13th amendment in today’s Constitution.”

The missing constitutional amendment might not make for very good legislation, but perhaps it’s not as terrible of a concept as it sounds. Here’s an idea: National Treasure III.