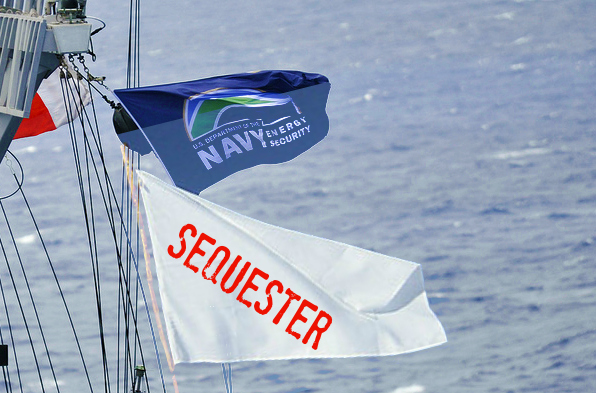 I reported in the current issue of Mother Jones on the US Navy’s aggressive goals to reduce dependence on foreign oil and fossil fuels (My Heart-Stopping Ride Aboard the Navy’s Great Green Fleet). These targets include testing and scaling up of biofuels and conserving whatever energy the Navy does procure by using new technologies and good-old common sense—plus training a new generation of officers as “energy warriors.”

So what’s the sequester going to do to those initiatives, which former Secretary of Defense Leon Panetta described as among his most important? I spoke with Tom Hicks, Deputy Assistant Director of the Navy for Energy. He told me that at this point all Department of Navy and Department of Defense programs are subject to cuts and civilian furloughs. But some programs weigh more importantly than others:

At this time of declining budgets, investments in the efficiency of our ships and airplanes and in developing alternative fuels becomes more important than ever. In many ways those investments provide savings to the Navy’s fleet and to the Navy ashore. The way we budget, we’ve already accounted for the savings that were expected to be made in fiscal year 2013. If those investments don’t happen we’ll experience additional costs that we’ll have to find a way to pay for in future years. So in a very real way we’re going to be facing some bigger budgetary issues if we can’t find ways to make those investments.

I know that energy remains one of the top priorities with the Secretary [of the Navy, Ray Mabus]. Certainly shipbuilding is probably foremost among his priorities. But energy is up there as well, in part because of what it provides us. For the fleet it provides additional combat capability and mission effectiveness, and it reduces our vulnerability to increasingly volatile petroleum markets. We had the [amphibious assault ship] USS Makin Island that just recently completed its maiden nine-month deployment. It went out with $32 million fuel budget and it returned back with $15 million saved over its planned fuel usage. That’s because it has a hybrid electric drive [part gas-turbine-electric and part diesel-electric] and many other efficiency measures on board that allows it to reduce the amount of energy it needs to conduct its missions. To us, to the Secretary of the Navy, it’s now more important than ever to maintain our level of investment in energy.

According to the Washington Guardian, the Navy is forecasting an $8.6 billion budget shortfall by the end of 2013, with plans to shut down four air wings, cancel or delay deployments of up to  six ships, dock two destroyers, and defer a planned humanitarian mission by the hospital ship USNS Comfort to Central and Latin America, plus furloughs among its civilian workforce. So far, no mention of axing energy programs.