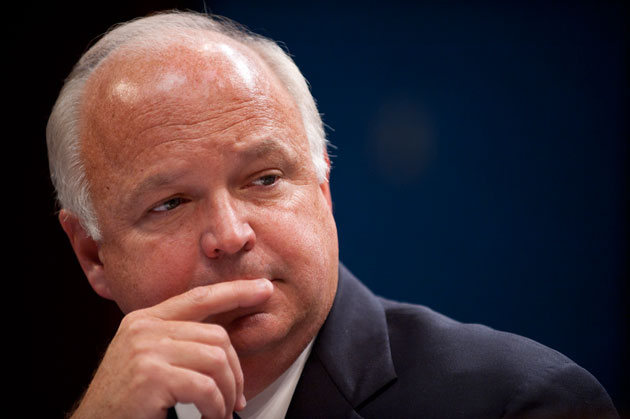 Rep. Jo Bonner (R-Ala.), the former chairman of the House ethics committee, has responded to questions Mother Jones first raised about the all-expenses paid trip to a Kenyan estate that he, two other GOP lawmakers, and members of their families took in August 2012, claiming that he was visiting the site where the Oscar-winning film Out of Africa was shot in order to learn about supposed connections between poaching and Al Qaeda.

As Mother Jones noted in a recent investigation, the estate the lawmakers visited is owned by the trust of a secretive French American family under investigation by French authorities for tax evasion and other misdeeds. The trip was organized by the International Conservation Caucus Foundation, a Washington-based nonprofit that is backed by polluting companies as well as four of the world’s largest environmental groups and spends much of its budget sending members of Congress on trips. The group was founded by a former lobbyist for African dictators who met with the lawmakers abroad.

New House rules Bonner signed off on in December 2012 sought to limit privately sponsored travel to nonprofits “with legitimate interests in providing appropriate fact finding opportunities to Members of Congress.” But when I asked Bonner what made the weeklong, $16,214.66 Kenyan excursion he and his wife enjoyed appropriate, he didn’t respond—until Wednesday. (The story hit newsstands in January and first appeared online on Tuesday.)

“It is disappointing, but not surprising, that Mother Jones’ [sic] mischaracterized what was an approved conservation fact-finding trip to Africa,” Bonner told the Alabama Media Group newspaper chain. “My participation was fully vetted by the non-partisan committee staff who determined that the trip was in full compliance with all House rules. The trip was privately funded by the International Conservation Caucus Foundation with no taxpayer dollars used at all.”

Bonner claimed that “the article implies I led the delegation.” It did not, although the congressman may have gotten that false impression if he didn’t read past the headline on the print version of the story (“The Bonner Party”).

His other points, however, are mostly true. And that’s precisely the difficulty, according to Public Citizen lobbyist Craig Holman. “Sadly to say, [the trip] does comply with the loophole-ridden ethics rules that [Bonner’s] committee has developed,” he said. “The problem is, it does not comply with what was originally intended” with the post-Jack Abramoff scandal lobbying reforms, Holman added.

“It was clearly intended that any lobbying entity that has business pending before Congress does not sponsor travel junkets,” explained Holman, who helped craft the Honest Leadership and Open Government Act of 2007. That’s certainly the case with ICCF funders like ExxonMobil, whose oil profits would be hit hard by the carbon-pricing bills Democratic lawmakers have recently introduced, or the Nature Conservancy, which depends on million-dollar EPA grants like this to fund its annual budget of nearly a billion dollars.

The reason those rules don’t apply to groups like the ICCF, which is funded by lobbyists and organizations that hire lobbyists, is because “Bonner’s ethics committee has decided those regulations won’t apply to nonprofits,” Holman said. “With that devastating blow, they have essentially crippled the travel restrictions.”

The fact that taxpayer dollars weren’t used is beside the point. “The problem is that lobbyist and special-interest money is being used to pay for the trip. It’s being financed by groups and people who want something in return from Bonner,” Holman said.

The Alabama congressman added that “one of the primary areas of focus during the visit” to a private ranch—featuring a golf course, racetrack, dozens of man-made lakes, around 120 miles of road, more than 200 major buildings, and some 350 employees—was “to investigate to what extent poaching is used by terror organizations, including Al Qaeda, to fund their operations.”

That’s fine and well, according to Holman. But “if it is significant for members of Congress to travel to some area to see what’s going on, then those types of trips can be financed by the government.” That would eliminate any real or perceived appearance of “that sort of conflict of interest,” he said.

At least one of Bonner’s constituents seems to agree with Holman’s assessment. In the Alabama Media Group story, a commenter under the name Blake Kirk noted that, “when somebody just GIVES a Congresscritter something that you or I would have to pay tens of thousands of dollars for, I have to wonder what they are getting back in return.”