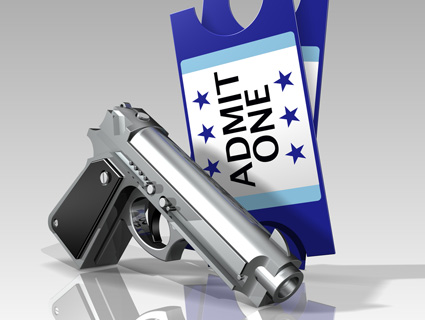 Last week, the Senate’s focus on guns shifted away from an assault weapons ban toward beefing up the loophole-ridden federal background check system. Gun control groups, sensing a chance for success with this approach, are laying on a full-court press to convince pro-gun lawmakers to come around on a proposal that has overwhelming public support. New York City Mayor Michael Bloomberg, through his group Mayors Against Illegal Guns, is leading the charge with a $12 million ad rollout targeting senators in 13 key states.

At issue is a bill authored by Sen. Chuck Schumer (D-N.Y.) that would require private gun sellers to run background checks on their buyers (as commercial dealers are required to do) and would ramp up the penalties on states that fail to submit records to the national background check system. None of that’s especially controversial: Roughly 20 percent of guns are sold without any background checks. Recent polls have shown that more than 80 percent of gun owners and nearly 90 percent of the public at large support closing the loopholes that allow such sales. Even Sen. Ted Cruz (R-Texas), who has threatened to filibuster “any legislation that will serve as a vehicle for any additional gun restrictions,” recently voiced support for improving background checks.

In February, Schumer was in talks with NRA darling Sen. Tom Coburn (R-Okla.), hoping that he would cosponsor a bipartisan bill. But the negotiations broke down because Schumer wouldn’t budge on requiring private gun sellers to keep records of their sales. Coburn countered that record keeping “cannot be used to enforce the law on the 250-300 million firearms in current circulation without the government knowing where all of them are on the date of enactment.” In other words, Coburn worried that Schumer’s bill would either be unenforceable or would lead to the national gun registry that gun advocates so fear. (The Brady Handgun Prevention Act of 1993, which established the federal background check system, currently requires that records of gun purchases be destroyed within 24 hours.)

The Coalition to Stop Gun Violence, a gun control advocacy group that’s also pressuring lawmakers, supports Schumer’s bill. Ladd Everitt, the group’s spokesman, dismisses Coburn’s concerns as part of a “process to delay and sabotage” the bill. But Everitt’s still optimistic that a strong background check bill will pass through Congress, considering the “off the charts” polling numbers. “You’re going to have to see a breaking point where Republicans will be adversely affected at the polls,” Everitt says. “When that happens I think you’ll see change very quickly.” (Coburn told the Washington Times that “some type” of improved checks would pass.)

Everitt attributes the gap between congressional and public support for stronger gun regulations to the influence of the National Rifle Association. He believes the NRA has been driven rightward as fringe gun groups have threatened to steal away its members. “To some degree, they’ve backed themselves into the corner with their radical rhetoric, where they either will not or cannot compromise,” he says.

“You’re going to have to see a breaking point where Republicans will be adversely affected at the polls. When that happens I think you’ll see change very quickly.”

After the 1999 Columbine massacre, NRA CEO Wayne LaPierre testified in support of “mandatory instant criminal background checks for every sale at every gun show.” The NRA now publicly states that it “opposes criminalizing private firearms transfers between law-abiding individuals, and therefore opposes an expansion of the background check system.” The reason for the change of policy, it says, is because background checks have proved ineffective. However, the group has reportedly been in closed-door talks with Sen. Joe Manchin (D-W.Va.), an NRA member who’s seen as a crucial cross-party negotiator, possibly indicating that the group is willing to cede some ground.

Senate compromise talks are expected to gear up after the Easter recess before a revised background check bill is introduced for a vote as part of a larger gun control package in April. If it avoids a filibuster or receives enough Republican support to override one, it also will have to be sufficiently bipartisan to stand a chance in the GOP-controlled House. (A spokesman for House Speaker John Boehner, who has the power to decide what bills reach the floor for debate, did not respond to a request for comment.) Mayors Against Illegal Guns has already conducted polls in at least 36 congressional districts, most represented by pro-gun lawmakers whose constituents strongly support universal background checks. The Coalition to Stop Gun Violence is also prepared to lay on the pressure in the House.

Whatever the outcome, Everitt urges patience. “We’re not going to undo years of NRA damage in three or four weeks,” he says. “I think there was a fundamental tipping point after Newtown, but we’ve got a long slog ahead of us.”