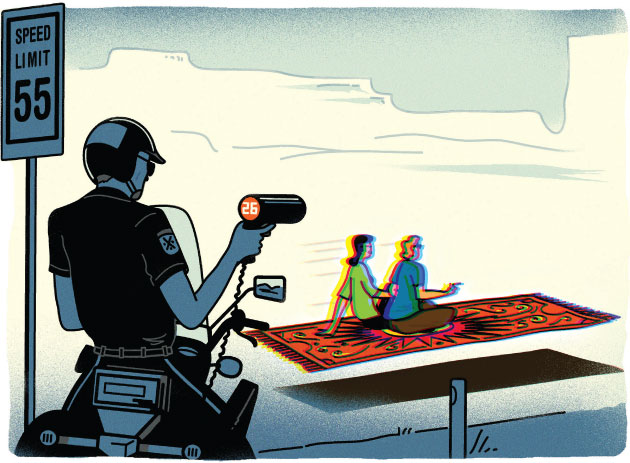 [Note: This article has been updated to reflect new developments in pot legalization and research on stoned driving.]

On the evening of February 23, 2010, Rodney Koon was pulled over for doing 83 in a 55 zone outside Traverse City, Michigan. The deputy who stopped Koon noticed that the inside of his Toyota RAV4 smelled funny, and the middle-aged carpenter admitted that he’d taken a few hits of marijuana six hours earlier.

As a pipe-carrying medical-marijuana user (for a hernia and rheumatoid arthritis), Koon thought that the law was on his side. The cop thought otherwise and took him in for a blood test, which revealed traces of THC, or tetrahydrocannabinol, pot’s psychoactive ingredient. Koon was convicted of violating the state’s “zero tolerance” drugged-driving law. He appealed, and last year the Michigan Supreme Court overturned his conviction on the grounds that the law was unfair to medical marijuana patients. The justices also criticized the law for failing to adequately define what driving “under the influence of marijuana” actually means.

Koon’s case highlights a contentious practical issue that has emerged with the spread of pot legalization: how to define—and prevent—stoned driving. Between 2009 and 2011, the number of THC-positive blood samples obtained from drivers by Colorado police more than doubled. A 2012 study found that about 7 percent of California drivers surveyed on two weekend nights tested positive for THC. Nearly the same percentage had alcohol in their blood; 1 percent had both pot and booze. (Drivers who agreed to participate in the study were given legal immunity, handed $20, and hooked up with a ride home if necessary.) Since recreational marijuana sales became legal in Colorado in January, criminal charges involving stoned driving in the Denver area have increased by 70 percent compared to the same period in 2013. In the six states that routinely perform toxicological tests on drivers, the share of fatal car crashes involving marijuana increased dramatically from 1999 to 2010, from 4.2 percent to 12.2 percent.

But just how stoned is too stoned to drive? Figuring that out isn’t easy. In all 50 states, if you’re pulled over on suspicion of driving under the influence, you must submit to a Breathalyzer test or face arrest and possibly a blood test. Yet cops lack anything like a Breathalyzer for THC, and studies have shown that the field sobriety test widely used by police departments correctly fingers stoned drivers only about 30 to 50 percent of the time; drunks are detected 80 percent of the time. Many police departments are trying to improve those odds by employing specialized drug recognition experts armed with a 12-step protocol that includes one-leg stands, finger-to-nose tests, and checking for “a lack of ocular convergence.”

Eleven states, many of which have legalized medical marijuana, simply make it illegal to drive with any trace of marijuana in your blood. Other states essentially regulate the drug like alcohol, requiring drivers to stay below a set limit of cannabinoids in their blood. When Washington voters legalized pot in 2012, they also outlawed driving with a blood THC level over 5 nanograms per milliliter—about half the level detected in Koon. Ohio and Nevada’s limit is even stricter: 2 ng/ml. These rules appeal to a public accustomed to drunk-driving standards, and they give police a simple benchmark for making arrests.

But these approaches don’t account for what scientists know about marijuana’s effects on drivers. “The reality is that alcohol and cannabis are two very different drugs that affect people in very different ways,” says Jan Ramaekers, a psychology and neuroscience professor at Maastricht University in the Netherlands. A 2009 study funded by the National Institute on Drug Abuse found that THC can persist in chronic pot smokers’ blood for a week after they stop smoking, sometimes at levels in excess of 3 ng/ml. Other research shows that those residual blood levels (and sometimes even much higher levels) don’t impair most heavy users’ psychomotor skills. If the goal is to arrest only people who are driving dangerously, Ramaekers says, then laws like Washington’s could lead to a rash of false convictions.

While booze can make people drive faster and more aggressively, marijuana has the opposite effect.

Last year, Colorado adopted what may be the most sophisticated approach to preventing driving while high. House Bill 1325, signed in May by Democratic Governor John Hickenlooper, establishes a presumption that drivers with blood levels of THC above 5 ng/ml are impaired, but allows them to rebut the charge if they can show that they were driving responsibly.

While booze can make people drive faster and more aggressively, marijuana has the opposite effect: Pot smokers, studies show, tend to compensate for their impairment by slowing down and leaving larger gaps between themselves and other cars. Analyzing traffic fatality data from 1990 to 2010, a study published last year in the Journal of Law and Economics found that states experienced a 13 percent decrease in traffic fatalities, on average, within four years of legalizing medical marijuana. These 16 states saw an even larger reduction in traffic fatalities involving alcohol, suggesting that wider pot use might reduce drunk driving because drinkers smoke up instead.

Still, Ramaekers cautions against thinking that stoners acting like Sunday drivers are completely safe. Marijuana users may “try to create their own box of safety, and within that world they can operate fine,” he says. “But there’s a lot of other information outside of that box that they can’t process, and that is a problem.”

Road tests and driving simulator studies have found that the more weed drivers inhale, the worse they do at essentials such as staying in their lanes, responding to sudden hazards (like a dog running into the street), and multitasking—for example, reading street signs on a twisty road while avoiding oncoming traffic. On average, drivers with blood THC levels equal to or in excess of 5 ng/ml cause crashes at 2.7 to 6.6 times the rate of sober drivers. Getting into the driver’s seat less than an hour after smoking a joint nearly doubles your risk of getting into a crash.

According to Ramaeker, most users should wait at least three hours to drive after smoking a joint.

So how much pot can you smoke before you’re a menace on the road? According to Ramaeker, a single puff on a joint should immediately disqualify you. Most users should wait at least three hours after smoking a joint. And mixing pot with booze is a bad idea: A study of French drivers involved in fatal car crashes found that, compared to completely sober drivers, those with cannabis, alcohol, or both drugs in their blood were, respectively, about 2, 9, and 14 times more likely to cause an accident.

While some pro-legalization advocates have signed off on strict stoned-driving laws, others remain wary. All the focus on THC levels and blood tests misses the point, says Paul Armentano, the deputy director of the National Organization for the Reform of Marijuana Laws, the nation’s most vocal pro-legalization group. “Citizens aren’t concerned about what substances may or may not be in drivers’ bloodstreams,” he says. “They’re interested in identifying and prosecuting drivers who operate a motor vehicle while impaired by the substance. So if the question here is impairment, then the focus of our research and law enforcement ought to be on better determining and identifying which drivers are impaired.”

And that brings us back to Rodney Koon. Besides telling the officer that he’d smoked pot earlier in the day, Koon also admitted that he’d recently had a beer, yet he passed a Breathalyzer test. Using current testing methods, there’s no foolproof way to gauge just how intoxicated Koon might have been, if at all. And in a zero-tolerance state, it doesn’t matter, anyway. Koon’s attorney, Mary Chartier, says that’s a serious problem as more Americans enjoy the right to get high: “You are effectively eliminating the ability of protected marijuana users to drive.”