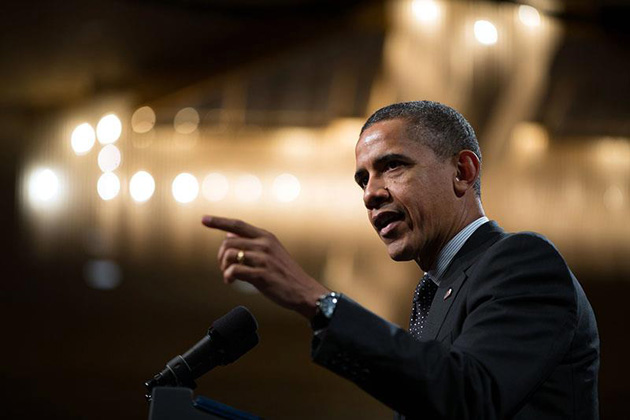 In the first State of the Union address of his second term, President Barack Obama sent a clear signal: He will vigorously pursue an unambiguous progressive agenda in his final years as president. Universal preschool, boosting the minimum wage, passing gun-safety legislation—Obama delivered a left-of-center demand list for Congress and his administration. He talked far more about jobs than taming the debt. He certainly cited his own efforts to reduce the deficits and hinted at another version of the grand bargain—pairing cuts in entitlements with a boost in tax revenues—the holy grail of the inside-the-Beltway set. But he advocated “modest” Medicare reforms, citing limits on payments, not benefits, and decried those calling for deep cuts in this program and Social Security. And he declared he would not yield to those seeking such cuts to stave off the soon-to-hit sequestration.

“We can’t just cut our way to prosperity,” Obama insisted, once again drawing the line between his progressive view of government as a source of investment in jobs-creating innovation and infrastructure and social development and the tea party-ized GOP’s belief that the only solution to the nation’s economic woes is slashing government and the tax bills of the well-to-do. This was the face-off he established after the shellacking of 2010 to set up the campaign of 2012. And that certainly worked out as he intended. Now re-elected by a healthy margin, Obama is willing to defy the conventionalists of Washington who fixate on debt and, instead, speak of other priorities: educating children, enhancing the purchasing power of low-income Americans, and protecting citizens from gun violence. This is a president setting his own course.

The speech was more than a Clintonesque recital of favorite policy initiatives. It was a thematic presentation of a to-do list. He nodded toward the deficit hawks, defied the Republican tea partiers, and forged ahead with the vision of America that he repeatedly explained during last year’s campaign. Having won a three-quarters-loaf victory in the fight over the Bush tax cuts weeks ago, Obama pivoted from using that tussle over tax rates for the rich to cold-cock GOPers to confronting them over private interest tax loopholes. You want to cut programs for middle- and low-income Americans to deal with the nation’s debt? he said. Well, that’s not going to happen, especially if you won’t support ending tax breaks for the well-heeled: “After all, why would we choose to make deeper cuts to education and Medicare just to protect special interest tax breaks?” He essentially dared House GOPers to play chicken with him again over government spending and the debt ceiling:

So let’s set party interests aside, and work to pass a budget that replaces reckless cuts with smart savings and wise investments in our future. And let’s do it without the brinksmanship that stresses consumers and scares off investors. The greatest nation on Earth cannot keep conducting its business by drifting from one manufactured crisis to the next. Let’s agree, right here, right now, to keep the people’s government open, pay our bills on time, and always uphold the full faith and credit of the United States of America. The American people have worked too hard, for too long, rebuilding from one crisis to see their elected officials cause another.

Obama has said this before. When he proclaimed, “let’s be clear: deficit reduction alone is not an economic plan,” he was not breaking new ground in his ongoing stand-off with the Rs.

What made this speech different was his forceful advocacy of fundamental progressive proposals. He called for an infrastructure-boosting bridge-building program and the launching of high-tech manufacturing hubs. He beefed up his demand for climate change action—and cornered Senator John McCain by urging “Congress to pursue a bipartisan, market-based solution to climate change, like the one John McCain and Joe Lieberman worked on together a few years ago.” He added, “if Congress won’t act soon to protect future generations, I will. I will direct my Cabinet to come up with executive actions we can take, now and in the future, to reduce pollution, prepare our communities for the consequences of climate change, and speed the transition to more sustainable sources of energy.”

Noting that fewer than 3 in 10 four year-olds are enrolled in a high-quality preschool program, Obama proposed working with states “to make high-quality preschool available to every child in America.” That is, as Joe Biden might say, a BFD. The president renewed his call for comprehensive immigration reform and insisted that Congress pass legislation that addresses the gap in pay between women and men. And Obama said it was time to boost the minimum wage to $9.00 an hour. (This, though, does represent a scaling-back of ambitions: In 2008, he called for it to be raised to $9.50 an hour by 2011.) He announced the formation of a commission to address the rampant problems in the nation’s voting system—and hailed a 102-year-old North Miami woman named Desilene Victor, who endured hours of waiting to vote in the last election.

On the foreign policy front, Obama also took a liberal line. He announced that he would be pulling 34,000 troops out of Afghanistan this year and that the war there would indeed be over by the end of next year. (Or at least the current version of the war.) And he addressed the criticisms of his administration’s drone program with a direct promise:

[W]e must enlist our values in the [counterterrorism] fight. That is why my Administration has worked tirelessly to forge a durable legal and policy framework to guide our counterterrorism operations. Throughout, we have kept Congress fully informed of our efforts. I recognize that in our democracy, no one should just take my word for it that we’re doing things the right way.  So, in the months ahead, I will continue to engage with Congress to ensure not only that our targeting, detention, and prosecution of terrorists remains consistent with our laws and system of checks and balances, but that our efforts are even more transparent to the American people and to the world.

These are just merely words and will not on their own satisfy civil libertarians and others troubled by the drone strikes. But this is certainly not a sentiment that the Bush-Cheney crowd held. And it is a marker that Obama can be called on in the months ahead.

The emotional highlight of the speech came when the president turned to an issue American politicians have long ducked: gun violence. Obama ended the speech with a demand that the Congress take action on proposals he has put forward:

It has been two months since Newtown. I know this is not the first time this country has debated how to reduce gun violence.  But this time is different. Overwhelming majorities of Americans—Americans who believe in the Second Amendment—have come together around commonsense reform—like background checks that will make it harder for criminals to get their hands on a gun. Senators of both parties are working together on tough new laws to prevent anyone from buying guns for resale to criminals. Police chiefs are asking our help to get weapons of war and massive ammunition magazines off our streets, because they are tired of being outgunned.

No recent president has focused on gun violence with such passion in a state of the union speech. Obama cited the tragic case of Hadiya Pendleton:

She was 15 years old. She loved Fig Newtons and lip gloss. She was a majorette. She was so good to her friends, they all thought they were her best friend. Just three weeks ago, she was here, in Washington, with her classmates, performing for her country at my inauguration. And a week later, she was shot and killed in a Chicago park after school, just a mile away from my house.

It was a powerful moment in a speech that offered a muscular progressivism, one centered firmly on values.

A speech, of course, won’t win the tough political and policy fights that Obama will confront in the coming months and years. But with this address, he didn’t hold back. And if he only succeeds in placing this nation on the road to universal preschool, that in itself would be a historic accomplishment of fundamental consequence. With this address—which seemed to bore House Speaker John Boehner—the president was not trying to win over recalcitrant Republicans and nudge them toward the compromises they have by and large eschewed. He was trying to lead.