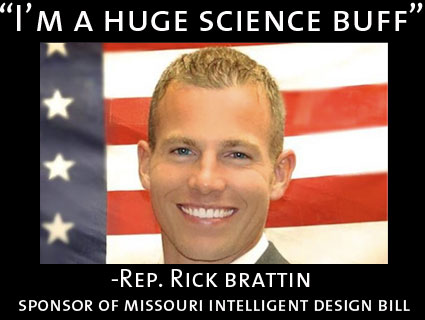 Late last month, Rick Brattin, a Republican state representative in Missouri, introduced a bill that would require that intelligent design and “destiny” get the same educational treatment and textbook space in Missouri schools as the theory of evolution. Brattin insists that his bill has nothing to do with religion—it’s all in the name of science.

“I’m a science enthusiast…I’m a huge science buff,” Brattin tells The Riverfront Times. “This [bill] is about testable data in today’s world.” But Eric Meikle, education project director at the National Center for Science Education, disagrees. “This bill is very idiosyncratic and strange,” he tells Mother Jones. “And there is simply not scientific evidence for intelligence design.”

HB 291, the “Missouri Standard Science Act,” redefines a few things you thought you already knew about science. For example, a “hypothesis” is redefined as something that reflects a “minority of scientific opinion and is “philosophically unpopular.” A scientific theory is “an inferred explanation…whose components are data, logic and faith-based philosophy.” And “destiny” is not something that $5 fortune tellers believe in; Instead, it’s “the events and processes that define the future of the universe, galaxies, stars, our solar system, earth, plant life, animal life, and the human race.”

The bill requires that Missouri elementary and secondary schools—and even introductory science classes in public universities—give equal textbook space to both evolution and intelligent design (any other “theories of origin” are allowed to be taught as well, so pick your favorite creation myth—I’m partial to the Russian raven spirit.) “I can’t imagine any mainstream textbook publisher would comply with this,” Meikle says. “The material doesn’t exist.”

Another bill introduced in the Missouri House, HB 179, has more in common with anti-evolution bills that have been proposed this year in states like Montana and Colorado. It asks teachers to “create an environment within public elementary and secondary schools that encourages students to explore scientific questions”—but doesn’t explicitly mention intelligent design. This is hardly the first time the Missouri House has tried to get evolution theory out of the classroom. Brattin and other cosponsors tried to get similar legislation passed last year, but the bill died in committee. In 2003, another bill with near-identical language to to HB 291 was sponsored by Rep. Robert Wayne Cooper (R-Mo.), but it also said that teachers who didn’t comply would be fired. It was so controversial that more than 450 Missouri scientists and educators supported a statement that said “intelligent design…isn’t science.”

Brattin argues that there are “numerous college professors within biology, school science teachers” who are “banned from the science community” because they want to teach other theories of origin. The National Center for Science Education’s Meikle agrees—the bill really could “open the door for teachers who are opposed to evolution to bring in creationist materials.” That’s why his group is “hoping it doesn’t pass.”