Ever since last summer, when a 82-year-old nun broke into the Y-12 nuclear weapons complex in Oak Ridge, Tennessee, the National Nuclear Security Administration has scrambled to improve its leadership and beef up security at America’s nuke facilities. Now it appears the agency has found the man for the job: The weekly trade publication Nuclear Weapons & Materials Monitor reported last week that the NNSA has named as its acting head of nuclear security Steve Asher, a retired Air Force colonel who less than four years ago was working as a “team leader” at a Target store in Spokane, Washington. Prior to that, he commanded a missile base in Montana that flunked a nuclear security test within five months of his departure.

This November 2009 video, dug up by the Project on Government Oversight (where I used to be a fellow), shows Asher hawking Black Friday bargains: “A lot of folks were being thrifty in their shopping this year, and so we sold more of our $1.99 towels than we expected!” (Click the screenshot for the link.) 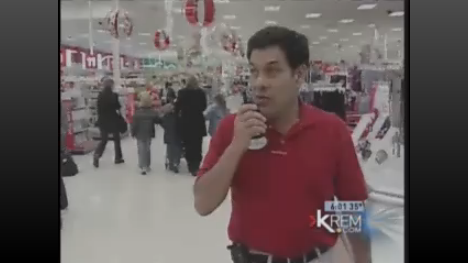 Asher’s new title is acting chief of defense nuclear security and associate administrator for defense nuclear security, which puts him in charge of developing and implementing security programs at nuke sites nationwide. He has only worked at NNSA since late last year, when he was brought in as a security consultant, Nuclear Weapons & Materials Monitor reported. According to NNSA spokesman Joshua McConaha, Asher will have to apply for the permanent position, just like any other candidate. “Asher was recruited into Target’s executive ranks after serving 33 years in the US Air Force,” he says. “There are very few people in the United States who have more experience.”

Citing privacy concerns, Target declined to answer questions regarding Asher’s term of employment, but it appears he came to Target after leaving Malmstrom Air Force Base in July 2008. From 2005 until 2008, as the commander of Malmstrom’s 341st Security Forces Group, he was in charge of security for 200 intercontinental ballistic missiles in central Montana, according to Katrina M. Heikkinen, a spokeswoman for the base.

In November 2008, the Air Force Times reported that the 341st Missile Wing had failed its “nuclear surety inspection,” which takes place every 18 months, after problems were found with maintenance, and also with the program that monitors access to the nukes (it passed its reinspection several months later.) “That’s what really concerns us,” says Peter Stockton, a senior investigator at POGO. “Malmstrom failed, and Asher can’t really claim that he’s not responsible for any of that stuff.”

“Malmstrom failed, and Asher can’t really claim that he’s not responsible for any of that stuff.”

Heikkinen said she could not comment on whether the failed inspection was related to Asher’s command. The NNSA’s McConaha, asked about the problems at Malmstrom, says that “there is absolutely no doubt” that Asher has sufficient experience for his new position. He “led nearly 1,300 airmen in providing a high state of security for the largest nuclear intercontinental ballistic missile field in the free world.”

Atomic City Underground, a blog by Knoxville News Sentinel reporter Frank Munger, reports that Asher also has 10 years’ experience advising the Air Force inspector general on nuclear security. At the NNSA, he is replacing acting chief Brig. General Sandra Finan, who took over from Jeff Harrell, another acting chief. The last permanent chief was Douglas Fremont, who was reassigned after an anti-war group embarrassed the agency by infiltrating the Y-12 complex.

All three had impressive security credentials: Finan worked as an inspector general at Air Force Global Strike Command and was director of “space forces” during the Iraq war. Harrell was previously director of the NNSA’s Office of Secure Transportation. And Fremont has at least three decades of experience in national security, mostly in submarines and nuclear weapons.

Given recent reports of security problems at American nuclear sites—the Department of Energy’s watchdog found in December that NNSA was failing to adequately inform law enforcement when its computers were hacked—POGO’s experts aren’t convinced that Asher is suitably prepared. “We’re concerned that, in this vulnerable time for the NNSA, someone who has been so out of this world for a while isn’t up to the task of making all the major security changes that really should be made,” says Lydia Dennett, a POGO research associate.

“Target,” counters NNSA spokesman McConaha, “is a Fortune 50 company who is extremely selective about who they recruit. He was responsible for managing hundreds of people and millions of dollars.”

The newscaster in the video seems to agree: Asher’s Target store exceeded “expectations in revenue and total number of shoppers.”