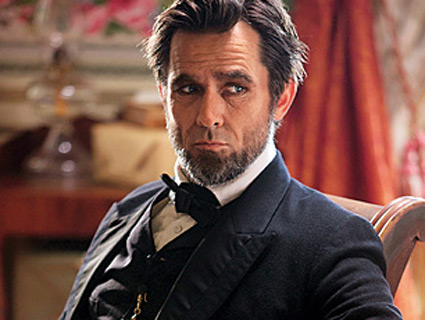 In late August, action-film maestro Tony Scott took his own life, jumping from the Vincent Thomas Bridge into the Los Angeles Harbor. One of the director’s final projects was a made-for-TV movie that he co-executive produced with his brother Ridley: An adaptation of the nonfiction thriller Killing Lincoln: The Shocking Assassination That Changed America Forever, a best-selling book written by Martin Dugard and TV host Bill O’Reilly. The film (premiering  on National Geographic Channel on Sunday, Feb. 17 at 8 p.m. ET/PT) stars Billy Campbell as President Abraham Lincoln and son of Don Johnson Jesse Johnson as stage-actor/assassin John Wilkes Booth. The movie is narrated by Tom Hanks‘ soothing timbre.

The made-for-cable Killing Lincoln continues Nat Geo’s recent habit of debuting an original film right around the time a more high-profile movie with similar content is making the rounds in movie theaters and the awards circuit. (In November, the channel released its Bin Laden assassination movie starring William Fichtner—a project that might have reminded some viewers of this.)

Killing Lincoln never rises above marginally passable entertainment. It is a generally clunky and flavorless exercise weakly mimicking prestige filmmaking. It is also the latest in a months-long deluge of Lincoln movies that includes Abraham Lincoln: Vampire Hunter, Steven Spielberg’s massive Oscar-bait Lincoln, Saving Lincoln, Abraham Lincoln vs. Zombies, and Army of Frankensteins. Yet Killing Lincoln has one distinction among this bunch: It just might be the most historically accurate.

This may seem odd, given that the movie is based on a mediocre book that Bill O’Reilly wrote in his spare time in between creatively reinterpreting reality at Fox News. Furthermore, it’s a book that history buffs have flagged for being pocked with factual errors.

But all that has apparently been cleaned up for the film version written by Erik Jendresen, whose previous writing credits include episodes of HBO’s beloved WWII miniseries Band of Brothers and this book about the Inca Medicine Wheel. And the attention paid to nailing down the facts and history is quite impressive, according to an expert in the studies of American political and social history.

“I thought the film was exceedingly accurate, more so than Spielberg’s,” Tyler Anbinder, professor of history at the George Washington University, wrote in an email after viewing the movie for Mother Jones.

“As a history lesson, [Killing Lincoln] was very good; it stuck very closely to the facts of the story, and resisted the temptation to add imagined detail for the sake of exploring the motives of the characters involved,” Anbinder said. “In that sense, this movie is better than Spielberg’s Lincoln, which added fictional events to the story (Lincoln’s son’s obsession with slavery, for example) to try to create a motivation for Lincoln to abolish it.”

“I tell my students [John Wilkes Booth] was more on par with Billy Baldwin than Alec.”

Anbinder is noted for his work on Lincoln, the Civil War, immigration, and 19th-century American politics. He also worked as a historical consultant for Martin Scorsese’s bloody 2002 Gangs of New York.

Spielberg and writer Tony Kushner’s (dull and vastly overrated) Lincoln has been Oscar-nominated out the wazoo for the upcoming 85th Academy Awards ceremony. It has also been duly hammered for a few inaccuracies, including the way in which it completely screwed the pooch on Connecticut’s vote on abolishing slavery.

Killing Lincoln isn’t without its own flubs. Notes Anbinder:

Lincoln in one scene was a head taller than his wife, but he should have been two heads taller than her. [And] this film made Booth appear far more famous in his day than he really was. His brother Edwin was a star as was his father Junius. John Wilkes was really a B-list actor. I tell my students he was more on par with Billy Baldwin than Alec. You knew who he was, but mostly thought of him in terms of his more famous brother and father.

On a related note, I haven’t yet asked the professor for his assessment of Abraham Lincoln: Vampire Hunter. I will update this post when I get a response on that.