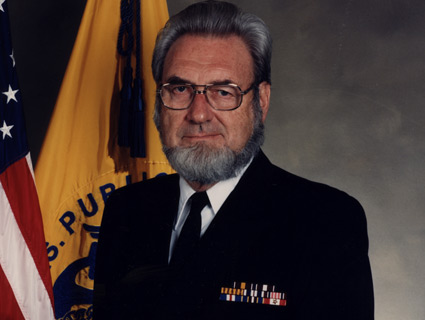 C. Everett Koop, the most famous Surgeon General the United States ever had, passed away Monday at his New Hampshire residence. He was 96.

Koop, who was appointed by President Ronald Reagan in 1981 and served until 1989, was famous for the aggressive anti-smoking campaign he launched in 1984. A former smoker, Koop challenged the country to become “smoke-free” by the year 2000, and railed against cigarettes as “the most important individual health risk in this country.” His unprecedented action on AIDS awareness drove Reagan administration policy and kick-started a national conversation on sex education and safe sex. His initial report on the disease drew heated controversy for its frank discussion of sodomy, condoms, and his advocacy of teaching sex ed to kids as early as the third grade. (The government printed 20 million copies.) And although he staunchly opposed abortion on religious grounds, he declined to use his position to campaign against legal and safe abortion in America.

For these and other high-profile efforts, Koop became a household name (a level of fame unusual for a public health administrator), with some admirers referring to him as a “scientific Bruce Springsteen” and a “rock-star.” He is also the only US Surgeon General to, a) have had his own reality TV show, and b) have a Frank Zappa song written about him.

In 1991, Koop hosted a five-part documentary series on NBC called C. Everett Koop, M.D. The show, over which Koop exercised a good deal of creative control, focused on the future of health and medicine, as well as the shortcomings of the United States health care system. C. Everett Koop, M.D. also made Koop the first and only Surgeon General to win an Emmy Award. Critic Walter Goodman of the New York Times dubbed it a “painfully timely series,” and Ken Tucker of Entertainment Weekly wrote that “Koop has the presence of a natural TV star.”

Obviously not everyone was a gentle admirer of Koop’s: During a 1988 world tour, experimental rock artist Frank Zappa performed a hip-hop-tinged funk song titled “Promiscuous” that was harshly critical of Koop’s and other Republicans’ approach to the AIDS crisis. (You can hear part of the song here.) The lyrics are not quite safe for work; but here’s a verse:

Is Doctor Koop a man to trust?

It seems at least that Reagan must

(And Ron’s a trusting sort of guy –

Zappa’s opinion was evidently not the prevailing one: In 1990, Koop was presented with the Public Welfare Medal from the National Academy of Sciences. And in 1995, he was awarded the Presidential Medal of Freedom by President Bill Clinton.