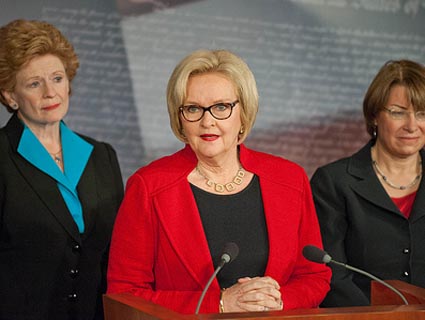 Congress is giving preventing violence against women another try.

On Tuesday, Sens. Patrick Leahy (D-Vt.) and Mike Crapo (R-Idaho) reintroduced the reauthorization of the Violence Against Women Act. Previous reauthorizations of the act, known as VAWA, have passed with overwhelming bipartisan support, but when the 1994 legislation needed to be reauthorized for a third time last year, the House GOP blocked it.

Many Republicans opposed over the bill’s increased number of visas for undocumented victims of domestic violence, its extension of tribal authority over nontribe members who abuse their American Indian partners, or its establishment of protections for gay and lesbian victims of domestic violence. But the GOP’s main talking point against the bill was procedural: Pointing to an application fee for visas for undocumented immigrants of domestic violence, Republicans said the bill raised revenue. The Constitution requires bills that raise revenue to originate in the House, not the Senate.

The new version of the bill resolves the House GOP’s procedural objection by removing the portion that would have increased the number of special visas allotted for undocumented immigrant victims of domestic violence. On the approval of law enforcement the federal government grants legal status to undocumented victims so that those victims can assist in prosecuting their attackers, who might otherwise use their lack of legal status as leverage to keep them silent. There is a cap of 10,000 of these “U visas” a year, and the government consistently hits the cap. Although the visas themselves are handed out by law enforcement, and the increased number of visas would have come from unused visas in past years, Republicans objected to the increased number as an invitation for fraud. “Caps are a way to control the flow of people. They are a stop-gap measure against fraud,” Sen. Chuck Grassely (R-Iowa) said in a floor speech against the bill last year.

Nevertheless, women’s rights activists are supporting the new version of the bill, citing other provisions in the bill helping immigrant victims of domestic violence and a promise from Leahy to use a potential immigration reform bill to address the U visa issue. “Does it thrill us that the U visa piece is not in there? Absolutely not,” says Lisalyn Jacobs of the women’s rights group Legal Momentum. “Are we sanguine about it, because we think we can now get a bill over to the House they can act on we hope? Yes.”

Although Leahy and Crapo’s new version of the bill resolves House Republicans’ procedural objection, it’s unclear whether the House GOP will back it. The House version of the bill was reintroduced with no Republican cosponsors. Anti-domestic-violence campaigners have resolved to press on regardless.

“[There] is no excuse to let VAWA reauthorization continue to drag on, especially when you see what is happening around the world, when you see what’s happening in India, when you see what happened in Steubenville,” says Rosie Hidalgo of Casa Esperanza, a group focused on domestic violence in the Latino community. “To have our own Congress unable to reauthorize the Violence Against Women Act sends the wrong message.”

Corrections: The protections in the bill were for gay and lesbian victims of domestic violence, not employees of groups that deal with domestic violence. The federal government grants legal status through the U-Visa, not local law enforcement, which lacks the authority.