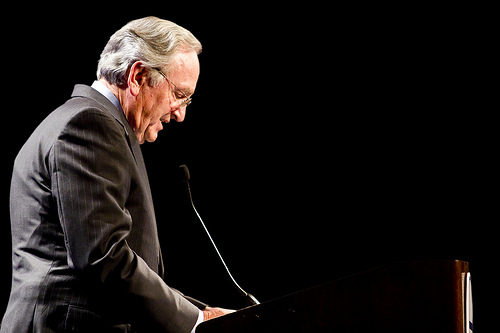 After 40 years in Congress, Sen. Tom Harkin (D-Iowa), a graying liberal lion, is calling it quits. He announced over the weekend that he won’t seek reelection in 2016.

In an interview with the Washington Post, Harkin was asked whether US Senate was “not as fun for him as it used to be.” No, it’s not, Harkin offered, and he pointed to, of all things, the spiraling cost of elections as a major reason why:

It’s not as much fun in that we’re so consumed with other things. Here’s what I mean: we used to have a Senate Dining Room that was only for senators. We’d go down there and sit around there, and Joe Biden and Fritz Hollings and Dale Bumpers and Ted Stevens and Strom Thurmond and a bunch of us—Democrats and Republicans. We’d have lunch and joke and tell stories, a great camaraderie. That dining room doesn’t exist any longer because people quit going there. Why did they quit going? Well, we’re not there on Monday, and we’re not there on Friday. Tuesday we have our party caucuses. That leaves Wednesday and Thursday—and guess what people are doing then? They’re out raising money.

The emphasis is mine. Those of us who follow political money read reports and op-eds, listen to speeches and panels and testimonies, and often the criticism is that big money in elections “drowns out” the voices of everyday Americans. But rarely do we hear about the impact of all that money on members of Congress themselves and how they do their jobs (or don’t). Only when lawmakers like Sen. Harkin, with an eye on the exit, pipe up do we get that insider’s view of what’s gained—and lost—in today’s cash-soaked politics. To be clear, the disgusting amount of time lawmakers spend raising money doesn’t just stymie real friendships and make the Senate less fun; when few senators get along, it makes the Senate less functional.

And how much time are talking about here? It varies from lawmaker to lawmaker, but here’s a PowerPoint slide prepared by the Democratic Congressional Campaign Committee that outlined the “model daily schedule” for incoming freshmen Democrats (the presentation was first obtained by the Huffington Post): 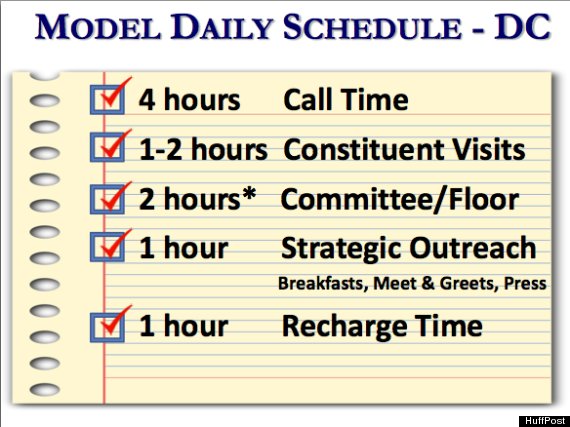 “Call time” means fundraising time: hours spent on the phone calling up current and potential donors and asking for campaign cash. The DCCC tells its freshmen to spend more time calling donors than they spend on anything else. Ezra Klein called it “the most depressing graphic for members of Congress.” I’m sure Tom Harkin would agree.