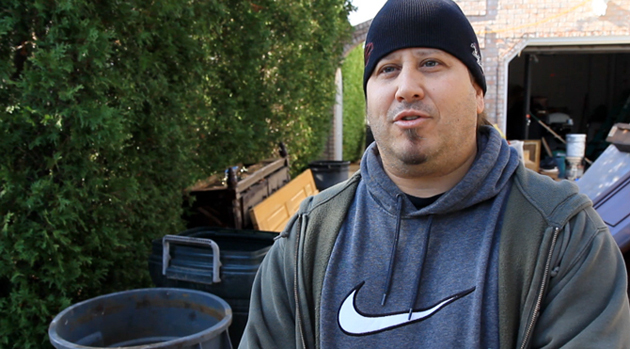 Tony Lazzara has forked out $20,000 of his own money for storm repairs. James West/Climate Desk

When Hurricane Sandy struck Staten Island, it dumped three feet of seawater into Tony Lazzara’s basement, just up the road from where two lives became some of the earliest fatalities of the storm. When Climate Desk first met Lazzara, he was dragging sopping furniture out onto the street. Three months later he’s still drying out, juggling contractors and insurance agents, and trying to stanch the steady hemorrhaging of his checking account.

“I had a refrigerator, washer, an oven, beautiful cabinets, bedroom sets, couches, you name it,” Lazzara says. His insurance didn’t help nearly enough, he says: So far, he’s had to fork out $20,000 from his own pocket. At least Lazarra still has his home; the same can’t be said for the 3,500 families displaced by the storm in New York and New Jersey. Still, his challenges are by now all too familiar to countless Tri-State families for whom the last three months have been an uphill battle to get back on their feet and squeeze aid out of insurance companies and government programs.

“Three months is a lifetime for some people,” Lazzara says. “Can you imagine being displaced for three months?” 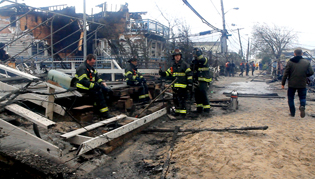 Lazzara and folks like him caught a much-needed break yesterday when Congress, after much hemming and hawing, finally passed a $50 billion aid package for victims of Hurricane Sandy—despite opposition from 31 GOP Senators who had previously supported emergency relief in their homes states. While much of the money will go to local governments (to repair infrastructure, reimburse emergency spending, and rebuilding the damaged coastline), some is destined for the pockets of people like Lazzara, whose homes were damaged or destroyed, and to business owners who suffered storm-related losses (the storm’s total pricetag is estimated at $50 billion). But Lazzara says he’s a long way from popping a bottle of champagne: Bad communication, neglect, and perceived mismanagement by government agencies like FEMA in the storm’s wake left him and his neighbors suspicious and cynical about ever actually receiving a check.

“That money’s going to sit in limbo forever,” he says, “There’s going to be a big fight about it again.”

That feeling is echoed across the bay in Breezy Point, Queens, where fire leveled more than 100 homes during the storm. The night of the storm, Eddie Valentine was waist-deep in floodwater, battling to douse the inferno; today, Valentine, chief of the local volunteer fire department, is still trying to dry out the first floor of his firehouse. Many of his friends and neighbors are still out of their homes, he says, and have spent the last three months watching the minutes tick by while waiting for word from FEMA and their insurers. And despite sticker shock from some in Congress about the size of the aid bill, Valentine says even $50 billion seems small next to the devastation in his community.

“You look at the amount of money and you wonder, who’s going to get what?” he asked.

Meanwhile, FEMA recently released new flood maps that could mean even more expenses for residents, like Lazzara, of low-lying parts of the city. The maps, redrawn after Sandy, double the number of homes within the flood zone; stiff building codes and higher insurance premiums for flood-prone areas will impose new costs on homeowners who had previously considered themselves out of harm’s way. But it’s likely that maps don’t even go far enough: FEMA’s top coordinator for New York City admitted to the Times that the new maps are “not taking into consideration any future climate change.” Sea level in NYC is expected to rise up to five feet by 2080; higher seas amplify damage from extreme weather events like hurricanes.

Valentine bristled at New York Governor Andrew Cuomo’s suggestion last week that some of the aid money might be used to help families relocate away from the most vulnerable coastal areas; it’s a hard sell, he says, for families whose roots in the neighborhood stretch back generations. As far as he can tell, the focus in Breezy Point is on piecing the community back together.

“It’s going to be very slow at this point. The rescue is over, and now we’re just trying to rebuild and get things back to where they were.”