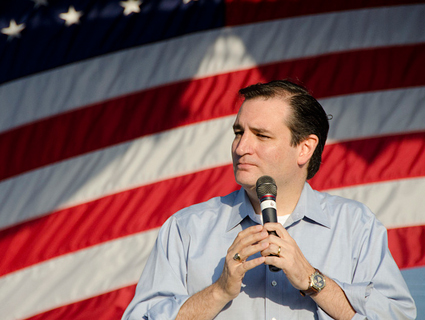 Ted Cruz had some advice for House Republicans on Saturday: “Stop reading the New York Times.”

Cruz, a freshman Republican senator from Texas, was at speaking at the National Review Institute Summit in Washington, a gathering hosted by a magazine that has dubbed him, at various points, the “Michael Phelps” of public speaking and “the next great conservative hope.” For three days, Republican heavyweights, including Louisiana Gov. Bobby Jindal and Wisconsin Rep. Paul Ryan, gathered to ruminate on what had gone wrong in November—and what the party can do to right the ship.

At times, the assembled conservative elites tried introspection. The New Republic‘s Alec MacGillis rounded up 10 such moments from the summit, including notable revelations suchs as “the financial collapse was kind of a big deal,” “the voter-fraud bogeyman was a distraction,” and “[l]iving without health insurance is a bummer.” These are all true. There was even some self-flagellation: Joe Scarborough, the former Republican congressman turned MSNBC host, eviscerated GOPers for shunning empiciricism during the campaign and for embracing Wall Street. Scarborough wondered why not a single Republican presidential candidate came out in favor of “breaking up the banks.” (For more on the intraparty wrestling match, see Slate‘s Dave Weigel.)

But calls for reform were often countered by a renewed quest for purity. There was Bill Kristol, editor of the Weekly Standard and a regular on Fox News, who called the idea of female soldiers serving in combat “literally nuts” (editor’s note: not literally) and, channeling William F. Buckley, urged Republian senators to stand atop* the wall of history, shouting “Stop!” John Podhoretz of Commentary magazine spent time rehashing his grievances about Georgetown Law School student Sandra Fluke. The American Enterprise Institute’s Michael Barone—speaking at an all-white panel called “Do Demographics Doom the Right?”—referred to the peculiar new breed of pro-Obama single women as “the Lena Dunham generation,” a nod to the Girls creator who famously invented contraception.

Virginia Attorney General Ken Cuccinelli, an architect of the campaign against the Affordable Care Act and Obama’s EPA, echoed Cruz’s call to unsubscribe from the nation’s top newspaper. Rep. Tom Cotton, a rising star from Arkansas, didn’t urge attendees to unsubscribe from the Times, but perhaps only because he didn’t need to, having previously called for its reporters to be thrown in prison. (Cotton also suggested his party didn’t need to change its approach on gay rights, because the string of marriage equality successes in November were probably fleeting.)

Kristol and Podhoretz’s comments, as well as Scarborough’s tough critique, came at a panel called “What is wrong with the Right?” Thoughtful as the speakers were, the question seemed to answer itself. The five panelists (moderator Reihan Salam not included) were all white males—as was everyone who asked a question.

Then there was Cruz, who hammered Mitt Romney for his 47 percent remarks while asserting, as he has done regularly since the election, that the GOP needs to be “the party of the 47 percent”—not by embracing a new set of policies, but by changing its rhetoric. Even as the movement’s elders wrestled openly with where the Republican party is headed, they offered a strikingly familiar road map.

So they beat on, boats against the current, borne back ceaselessly into their gaffes.

*Update: I’m informed the word I was looking for here was “athwart.”