By cutting off federal funding for research and stymieing data collection and sharing, the National Rifle Association has tried to do to the study of gun violence what climate deniers have done to the science of global warming. No wonder: When it comes to hard numbers, some of the gun lobby’s favorite arguments are full of holes. (This article has been updated.)

Myth #1: They’re coming for your guns.

Fact-check: With as many as 310 million privately owned guns in America, it’s clear there’s no practical way to round them all up (never mind that no one in Washington is proposing this). Yet if you fantasize about rifle-toting citizens facing down the government, you’ll rest easy knowing that America’s roughly 70 to 80 million gun owners already have the feds and cops outgunned by a factor of around 79 to 1. 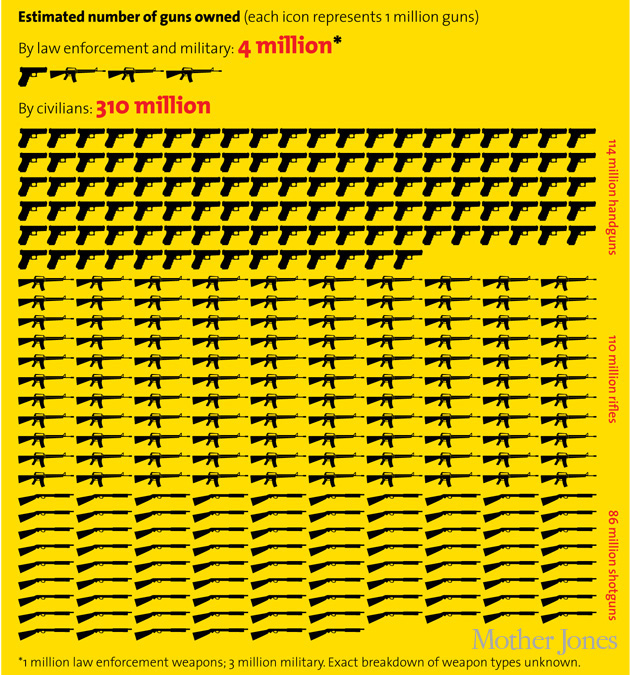 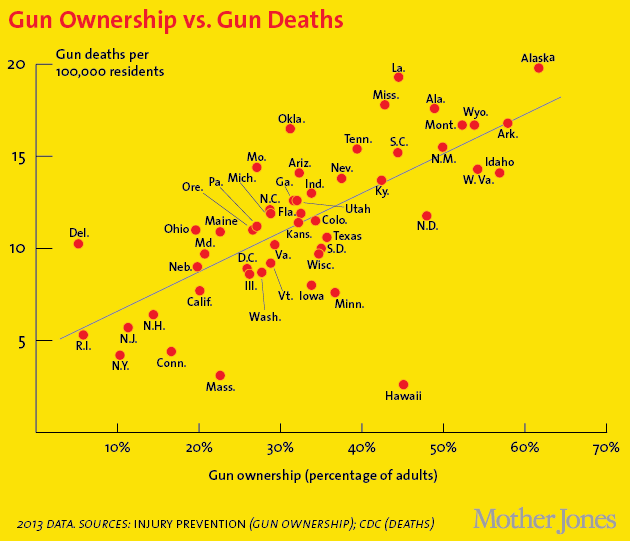 Myth #3: An armed society is a polite society.

Fact-check: Various studies suggest that being armed increases your chances of getting into a confrontation.
• Nine percent of Americans report signs of “impulsive angry behavior” (such as breaking things and getting into fights)—and say they own a gun.

• Drivers who carry guns are 44 percent more likely than unarmed drivers to make obscene gestures at other motorists, and 77 percent more likely to follow them aggressively.
• Among Texans convicted of serious crimes, those with concealed-handgun licenses were sentenced for threatening someone with a firearm 4.8 times more than those without.
• In states with Stand Your Ground and other laws making it easier to shoot in self-defense, those policies have been linked to a 7 to 10 percent increase in homicides.

Fact-check: Mass shootings stopped by armed civilians in the past 33 years: 0
• Chances that a shooting in a hospital emergency department involves guns taken from guards: 1 in 5

Myth #5: Keeping a gun at home makes you safer.

Fact-check: Owning a gun has been linked to higher risks of homicide, suicide, and accidental death by gun.
• For every time a gun is used in self-defense in the home, there are 7 assaults or murders, 11 suicide attempts, and 4 accidents involving guns in or around a home.
• 43 percent of homes with guns and kids have at least one unlocked firearm.
• In one experiment, one third of 8-to-12-year-old boys who found a handgun pulled the trigger.

Myth #6: Carrying a gun for self-defense makes you safer.

Fact-check: In 2014, according to FBI data, nearly eight times more people were shot and killed in arguments than by civilians trying to stop a crime.
• In one survey, nearly 1 percent of Americans reported using guns to defend themselves or their property. However, a closer look at these claims found that more than half involved using guns in an aggressive manner, such as escalating an argument.
• A study in Philadelphia found that the odds of an assault victim being shot were 4.5 times greater if he carried a gun. His odds of being killed were 4.2 times greater.

Fact-check: In 2013, more than 5 times more women were shot by husbands, boyfriends, and ex-partners than murdered by male strangers.
• A woman’s chances of being killed by her abuser increase more than 5 times if he has access to a gun.
• One study found that women in states with higher gun ownership rates were 4.9 times more likely to be murdered by a gun than women in states with lower gun ownership rates.

Fact-check: So said NRA executive vice president Wayne LaPierre after the Newtown massacre. So what’s up with Japan?

Fact-check: More guns are being sold, but they’re owned by a shrinking portion of the population.
• About half of Americans said they had a gun in their homes in 1973. Today, about 37 percent say they do. Overall, about a third of Americans own a gun.
• Around 75 percent of gun owners are men. On average they own 7.9 guns each.

Myth #10: We don’t need more gun laws—we just need to enforce the ones we have.

Fact-check: Weak laws and loopholes backed by the gun lobby have made it easier for people to get guns illegally. And existing gun laws aren’t preventing guns from getting into the wrong hands: More than 75 percent of the weapons used in mass shootings between 1982 and 2012 were obtained legally.
• As much as 40 percent of all gun sales involve private sellers and don’t require background checks. In a survey, 40 percent of prison inmates who used guns in their crimes said they’d gotten them this way. More than 80 percent of gun owners support closing this loophole.
• An investigation found that 62 percent of online gun sellers were willing to sell to buyers who said they couldn’t pass a background check.
• When researchers posed as illegal “straw” buyers, 20 percent of licensed California gun dealers agreed to sell handguns to them.
• The Bureau of Alcohol, Tobacco, Firearms, and Explosives did not have a permanent director for seven years, due to an NRA-backed requirement that the Senate approve nominees.