“A lie can travel halfway around the world while the truth is putting on its shoes.”
– Attributed to Mark Twain

The difficulties in debunking blatant antireality are legion. You can make up any old nonsense and state it in a few seconds, but it takes much longer to show why it’s wrong and how things really are.

This is coupled with how sticky bunk can be. Once uttered, it’s out there, bootstrapping its own reality, getting repeated by the usual suspects.

Case in point: The claim that there’s been no global warming for the past 16 years. This is blatantly untrue, a ridiculous and obviously false statement. But I see it over and again online, in Op Eds, and in comments to climate change posts.

The good news is, Kevin C. from Skeptical Science has created a nice, short video showing just why this claim is such a whopper.

I like this: clear, to the point, and easy to understand. The bottom line is that temperatures continue to rise, and that human-caused greenhouse gas forcing of the climate has not even slowed, let alone stopped.

I’ll note that climate change deniers are still going on about climate scientists manipulating data. They’re even trying to cast doubt on the measurements showing 2012 is the hottest year on record in the US! Which it was. The irony is rich; it’s a common tactic for deniers to accuse actual scientists of the very tactics the denialists use. It’s a level of chutzpah so high that even Yiddish can’t do it justice.

You want to hear about real manipulation? Media Matters reports that for the past four years, not once was a scientist on a Sunday morning news show to talk climate change. Those discussions were dominated by politicians or a media people. Sauce for the goose: Media Matters found that every politician interviewed was a Republican. And since I’m at it, please, don’t bother with false equivalencies.

By the way, Lamar Smith (R-Tex) is a climate change denier. And he’s taking over the Congressional House Science Committee.

It’s more than incredible; it makes Orwell look like a piker. 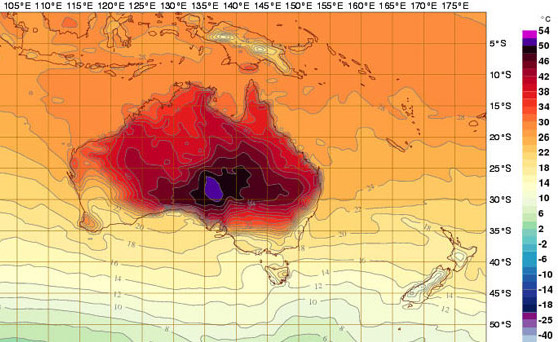 Predicted temperatures in Australia for Monday, Jan. 14, 2013. Bureau of Meteorology

And in the meantime, we saw Arctic sea ice at record low levels in 2012. West Antarctica and Greenland are melting. It is getting so hot in Australia right now that weather forecasters had to add a new color to the weather maps to indicate temperatures above 54° Celsius—that’s 130° Fahrenheit. The heat wave has literally set fire to Australia. And for me (and astronomers around the world) it’s personal; we almost lost a major observatory to Australian wildfires over the weekend.

And instead of doing something about it, we have to tie up all our time fighting denialist propaganda. It’s shameful.

So let this be clear: There is no scientific controversy over this. Climate change denial is purely, 100 percent made-up political and corporate-sponsored crap. When the loudest voices are fossil-fuel funded think tanks, when they don’t publish in science journals but instead write error-laden op-eds in partisan venues, when they have to manipulate the data to support their point, then what they’re doing isn’t science.